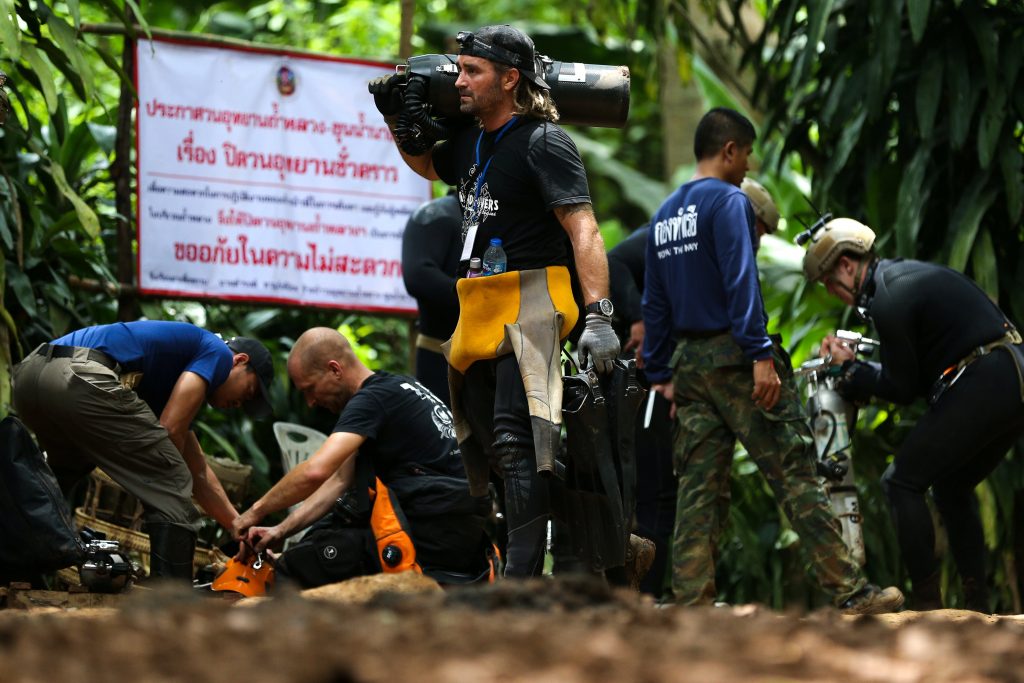 Rescuers in Thailand were no closer on Thursday to deciding when and how to extract 12 boys and their coach from a flooded cave complex, where they were found this week, hungry and frail but otherwise in good health, after nine days lost underground.

The search and rescue operation for the boys, who disappeared in the cave in the northern province of Chiang Rai on June 23, had seemed to be nearing an end when British and Thai divers found the boys late on Monday, huddled on a small, muddy bank in a flooded chamber.

But rescuers now have to figure out how to get them out, through several miles of dangerously flooded tunnels, or even to attempt to bring them out for now.

One possibility is that the 13 stay put in the Tham Luang cave until the flood waters recede, at the end of the rainy season in about four months.

But some officials say the boys could be out in days if the weather is on their side and enough water can be pumped out of the cave network to enable the boys to get out the same way they got in, just before heavy downpours hit the region, on foot through muddy tunnels, perhaps with some swimming.

A third option would be to teach the boys to use scuba gear, and they could then dive through the flooded tunnels, the way their rescuers reached them. A fourth possibility would be to find an alternative way into their chamber.

Kobchai Boonarana, deputy director-general of the Disaster Prevention and Mitigation department, said it was up to the rescue team in the cave to decide if and when the boys would be strong enough to tackle the journey out.

“Their conditions, we can see that their morale is good but what about their strength and their ability? That’s up to the team inside to decide,” Kobchai told reporters on Thursday.

“Our job is to keep pumping out water and it is up to the team inside to assess the safety level and whether the kids can travel safely through,” he said.

Regional army commander Major General Chalongchai Chaiyakum said it took rescuers 11 hours to do a round-trip from the cave’s entrance to the group and back, often battling powerful currents in the murky water.

Rescuers had to contend with days of heavy rain that flooded the cave complex at the beginning of the search, but the weather has been relatively dry for the past four days.

But the meteorological department warned that up to 60 percent of the country’s north, including Chiang Rai, can expect heavy rain from July 7 to July 12.

Authorities have sent in food, water and medical staff, some of whom are staying with the boys full time.

Chiang Rai governor Narongsak Osottanakorn said all members of the group did not have to be brought out at the same time, but could be extracted over days, depending on the weather.

“We’re assessing weather conditions, if it rains and the water level rises, how many hours, days do we have?” he said.

King Maha Vajiralongkorn thanked those involved in finding the boys.

“This circumstance has clearly shown the power of unity in action, power of love and goodwill towards fellow men regardless of race and religious beliefs,” the king said in a letter.

Volunteers have been descending on the cave site to join the multinational rescue team, which includes Australian police, U.S. military personnel and British cavers as well as more than 1,000 Thai army and navy personnel.

Father and son team Rafael and Shlomi Aroush drove for 12 hours from their home in Udon Thani province to help with the rescue effort, arriving at the cave early on Thursday.

Rafael, 53, who is from Israel but has lived in Thailand for more than 30 years, said he had been inside the cave 25 years ago and found that it was more difficult to navigate than other caves he had tackled.

“It’s very narrow. The way divers have to work is not a normal way of diving. The visibility is also really bad. You’re diving blindly,” Aroush told Reuters.

He said it would be challenging for the boys.

“Learning to dive is easy, but this is not normal diving,” he said.