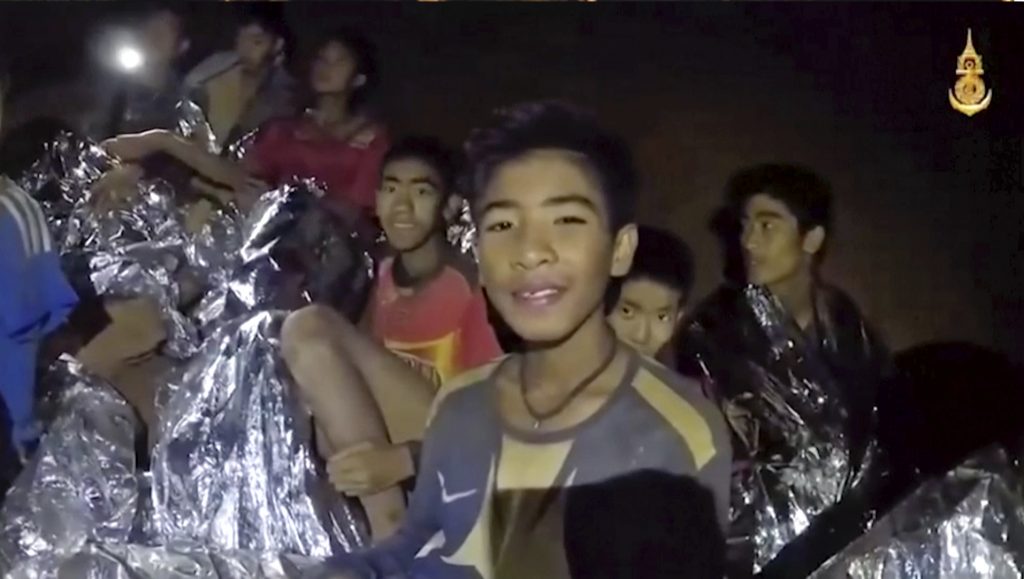 Their skinny faces illuminated by a flashlight, the Thai soccer teammates stranded more than a week in a partly flooded cave said they were healthy on a video released Wednesday, as heavy rains forecast for later this week could complicate plans to safely extract them.

The 12 boys and their coach are seen sitting with Thai navy SEALs in the dark cave. The boys, many wrapped in foil warming blankets, take turns introducing themselves, folding their hands together in a traditional greeting and saying their names and that they are healthy.

The video lasting about a minute was recorded sometime Tuesday and was posted on the navy SEAL social media page Wednesday morning. The navy later released two more videos of the boys.

The boys, aged 11-16, and their 25-year-old coach disappeared after they went exploring in the Tham Luang Nang Non cave in northern Chiang Rai province after a game June 23. The teammates, who were trapped inside when heavy rains flooded the cave, were found by rescue divers late Monday night during a desperate search that drew assistance from experts around the globe.

Authorities said the boys, who had also been shown Tuesday in a video shot by the British diver who discovered them, were being looked after by seven members of the Thai navy SEALs, including medics, who were staying with them inside the cave. They were mostly in stable condition and have received high-protein drinks.

In all of the videos the boys have appeared in good spirits. In the most recent videos a navy SEAL is shown treating minor cuts on the feet and legs of the boys with antibiotic ointment. Several of the boys are seen smiling as they interact with the navy SEAL, who cracks jokes.

Seeing the boys has boosted the mood of relatives, and officials are working to install an internet cable to the cave so that parents can talk to their children.

Kian Kamluang, whose 16-year-old son Pornchai is inside, said she had thought it was a 50 percent chance that her son would be found.

“It’s like he has been given a new life,” she said, adding that she’ll never let her son go into a cave or near water again.

SEAL commander Rear Adm. Arpakorn Yookongkaew said Tuesday that there was no rush to bring the group out of the cave, since they’re safe where they are. The current flooding situation means the boys would have to dive, which rescue experts have said could be extremely dangerous.

While efforts to pump out floodwaters are continuing, some Thai officials have indicated that heavy rains forecast for this weekend could force them to decide the boys should swim and dive out using the same complicated route of narrow passageways through which their rescuers entered.

Chiang Rai provincial Gov. Narongsak Osatanakorn said Wednesday that the boys have been practicing wearing diving masks and breathing, but he doesn’t believe they have attempted any practice dives.

He said it is unknown when an extraction could be attempted, but it is unlikely to be Wednesday.

Authorities said they were still exploring other options, such as scouring the mountainside for other ways into the cave and finding faster ways to pump water from the cave.

Cave rescue experts have said it could be safest to simply supply the boys where they are for now, and wait for the water to go down. That could take months, however, given that Thailand’s rainy season typically lasts through October.

The British Cave Rescue Council, which has members taking part in the operation, said in a statement that “although water levels have dropped, the diving conditions remain difficult and any attempt to dive the boys and their coach out will not be taken lightly, because there are significant technical challenges and risks to consider.”

Gary Mitchell, the group’s assistant vice chairman, said getting out of the cave requires about a half a mile of diving total, though not all in one stretch, and takes about three hours.

“There’s air pockets along the way,” he said. “It’s confined spaces. It’s almost zero visibility. There’s currents to battle against in places as well. So it’s really quite a strenuous environment to be in,” he said.