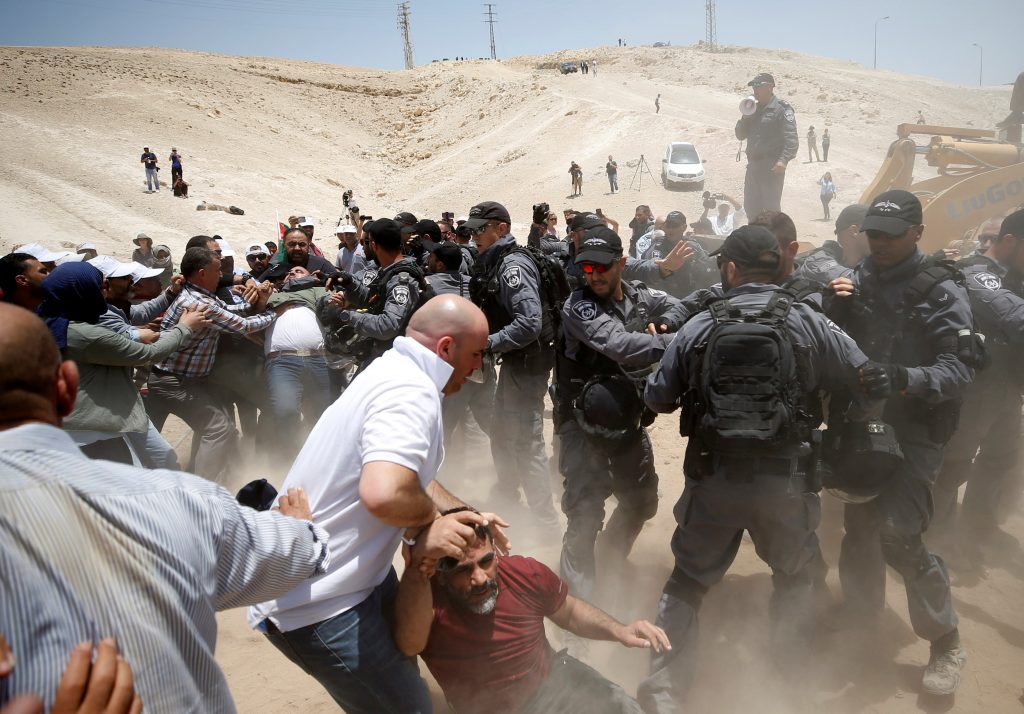 Palestinian protests broke out on Wednesday at a Bedouin village in the Shomron facing Israeli demolition in what rights groups have condemned as a bid to expand the Jewish presence in the region.

Israel moved three bulldozers to the village, Khan al-Ahmar, earlier in the day though demolition had yet to begin, after the military left a land confiscation notice there on Tuesday.

Around 180 Bedouin, raising sheep and goats, live in tin and wood shacks in Khan al-Ahmar. It is situated between the Israeli city of Maalei Adumim near Yerushalayim, and a smaller community to the northeast, Kfar Adumim, not far from Yericho.

Khan al-Ahmar was built without Israeli permits. Israel has long sought to clear Bedouin from the area, and the High Court approved the demolition in May.

Removing the Bedouin, human rights groups say, would make it more difficult for Palestinians to achieve territorial contiguity in Yehudah and Shomron, which they covet for a future state.

At Khan al-Ahmar, several dozen Palestinians scuffled with Israeli police, who reportedly dragged some away amid violent altercations. Police spokesman Micky Rosenfeld said 11 people were arrested for throwing stones at officers and trying to interfere with the evacuation.

Three officers were lightly injured, and one required hospital treatment, the police said.

A Palestinian ambulance service said 35 protesters were hurt and four of them were taken to hospital.

“I was born here and will not move anywhere else,” said Feisal Abu Dahok, 45. “If they destroy the village, we will build it again here or nearby.”

Israel said it plans to relocate the residents to an area about seven miles away, near the Palestinian village of Abu Dis.

The new site is adjacent to a landfill, and rights advocates say that a forcible transfer of the residents would violate international law.

Khan al-Ahmar’s residents belong to the Jahalin tribe of Bedouin who were expelled from southern Israel by the military in the 1950s.