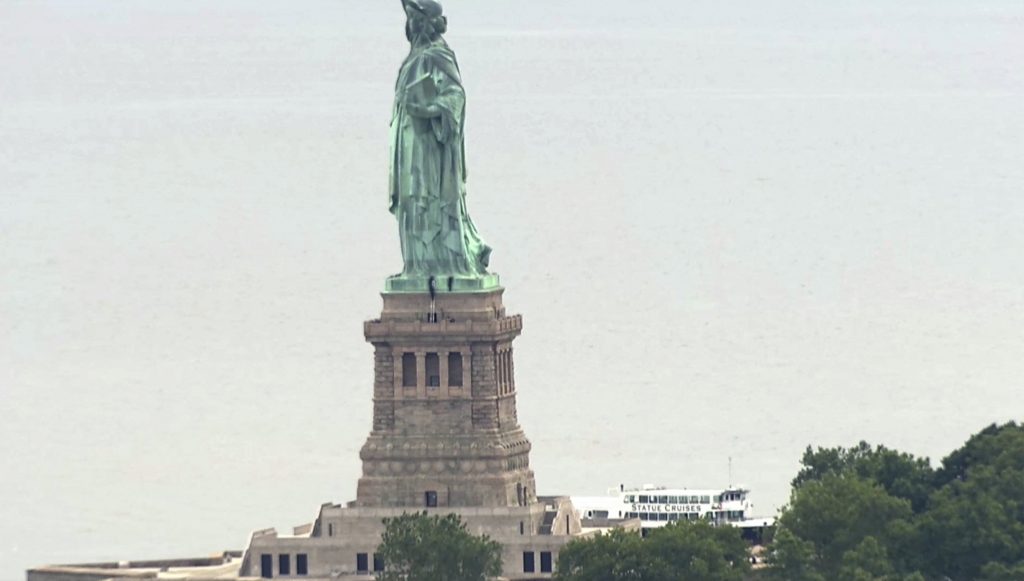 Several people who hung a banner from the Statue of Liberty’s pedestal calling for abolishing the federal government’s chief immigration enforcement agency were arrested on July Fourth shortly before a person scaled the statue’s base, forcing its evacuation.

The protester who climbed the statue’s base was escorted down by police after a roughly four-hour standoff. News helicopter video showed the protester about 100 feet aboveground alternately sitting and lying down at the bottom edge of the statue’s robes. Police, standing on a ladder and a ledge nearby, tried to talk the climber into descending.

After two New York Police Department officers reached her, news footage showed her and the officers moving carefully along the edge of the statue’s robes toward a ladder police had set up. She then climbed down about 25 feet to the statue’s observation point, with another officer descending ahead of her.

The climber had made about a 25-foot ascent from the monument’s observation point, National Park Service spokesman Jerry Willis said. Visitors were forced to leave Liberty Island hours before its normal 6:15 p.m. closing time, he said.

Earlier and farther below, at least six people were taken into custody after unfurling a banner that read “Abolish I.C.E.,” Willis said. The message referred to Immigration and Customs Enforcement, a part of the Department of Homeland Security. ICE officers arrest and deport immigrants who are in the United States illegally, among other duties.

The activist group behind the banner, Rise and Resist, tweeted that the climber wasn’t connected to its demonstration and expressed concern for the climber’s safety.

Under Trump’s zero-tolerance policy, the government has begun requiring border agents to arrest and prosecute anyone caught entering the country illegally. That resulted in more than 2,000 children being separated from their parents within six weeks this spring.

Under public pressure, Trump later halted his policy of taking children from their detained parents. A federal judge in California ordered the Trump administration late last month to reunite the more than 2,000 children with their parents in 30 days, or 14 days in the case of those under age 5.

“Abolish ICE” has become a rallying cry at some protests around the country and for some prominent Democratic officials seeking to boost their progressive credentials.

Protests and evacuations at the Statue of Liberty are rare but not unheard of.

Last February, someone hung a banner reading “Refugees Welcome” from the observation deck. The sign was taken down about an hour after being discovered.

A year earlier, a West Virginia man with psychological problems was sentenced to time served after calling in a bomb threat. His call forced the evacuation of Liberty Island, sending 3,200 people on boats back to lower Manhattan and New Jersey.

The statue, a gift from France, was dedicated in 1886. It became a welcoming symbol for immigrants and refugees coming to the U.S.