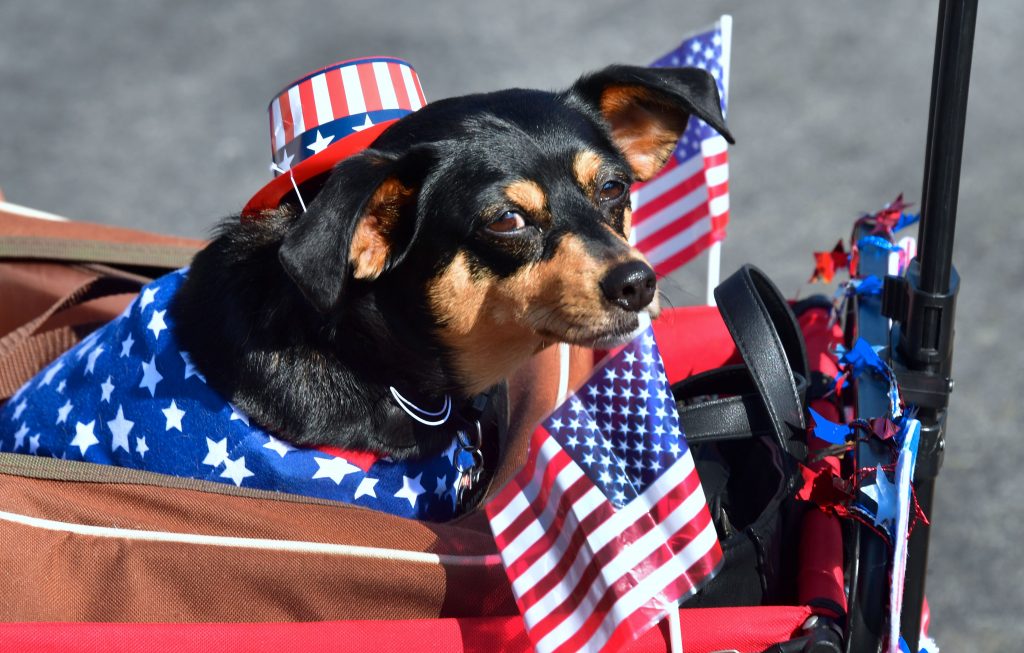 With backyard barbecues and fireworks thundering across night skies, Americans are celebrating Independence Day by participating in time-honored traditions that express pride in their country’s 242nd birthday.

From New York to California, July Fourth festivities will be at times lively and lighthearted, with Macy’s July Fourth fireworks and Nathan’s Famous hot dog-eating contest.

The day’s events will also be stately and traditional, with parades lining streets across the country and the world’s oldest commissioned warship firing a 21-gun salute to mark the 242 years since the signing of the Declaration of Independence.

For some Western states, however, the holiday will be a bit more muted, as high wildfire danger forces communities to cancel fireworks displays.

Here are highlights of Wednesday’s festivities so far:

Crowds are lining the streets in a Rhode Island town to see what’s billed as the nation’s oldest continuous Fourth of July celebration. Begun in 1785, the Bristol parade typically attracts about 100,000 people to the seaside town.

This year’s will be a scorcher.

When the parade kicked off at 10:30 a.m., the temperature was hovering near 90 degrees. The Providence Journal reports there will be water stations along the 2.5-mile route and medical personnel will watch the marchers for signs of heat illnesses.

The fire chief told the newspaper it has been a few years since it has been this hot during the parade.

The USS Constitution will sail in Boston Harbor and fire her guns again to mark Independence Day.

The plan was for the world’s oldest commissioned warship to leave its berth at the Charlestown Navy Yard on Wednesday and glide through the harbor to mark 242 years since the signing of the Declaration of Independence.

The ship, nicknamed “Old Ironsides,” was to travel to Fort Independence on Castle Island and fire a 21-gun salute.

The 101st Field Artillery from the Massachusetts National Guard was to return the salute.

An additional 17-gun salute will fire as the Constitution passes the U.S. Coast Guard Station, the former site of the shipyard where the vessel was built in 1797.

The country’s longest-running live national July Fourth broadcast tradition — PBS’ broadcast of music and fireworks from the U.S. Capitol’s West Lawn — is facing new counterprogramming from the White House, which is hosting its own concert and view of the National Park Service’s fireworks show.

Each show will have separate entertainers, and will include the fireworks display from the National Park Service.

LIGHTING UP THE NIGHT SKIES

In New York, the Macy’s fireworks show over the East River promises 25 minutes of sparkle and “ahhhh,” plus the West Point Band. But some places in the American West have canceled their planned July Fourth fireworks because of high wildfire danger; and others are doing drone light displays instead of pyrotechnics.

In Colorado, the wildfire danger forced some communities to cancel their July 4 fireworks. However, other shows will still go as planned in Denver, Colorado Springs and Fort Collins.

The small mountain town of Silverton in southwestern Colorado called off the fireworks part of its annual Independence Day party; but the rest of Wednesday’s celebration is still on, including live music and a parade that ends with a water fight with firefighters.

Aspen will have a fireproof drone light display above town.

This was the first Fourth of July that many people were able to call themselves U.S. citizens after participating in naturalization ceremonies across the country.

In New Hampshire, more than 100 people from 48 countries became U.S. citizens during a ceremony at the Strawbery Banke museum in Portsmouth as part of the museum’s annual “American Celebration.” Sens. Jeanne Shaheen and Maggie Hassan, and Gov. Chris Sununu attended the ceremony.

A ceremony was also held aboard the USS New Jersey, where dozens of people from countries including Vietnam and Bangladesh were sworn in.