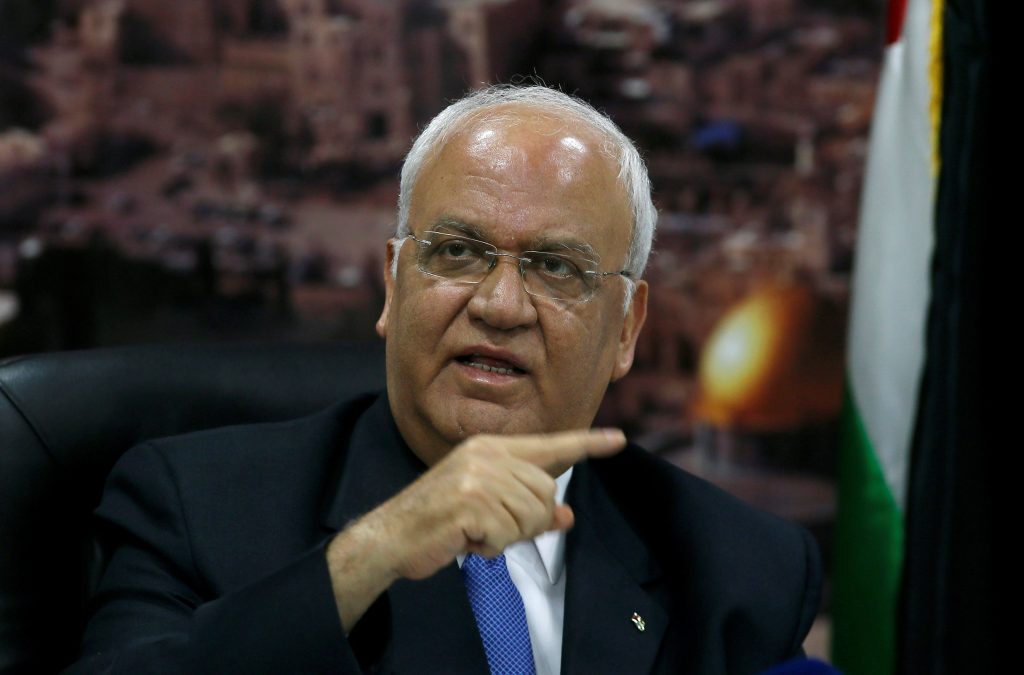 The Palestinian Authority has lashed out at Israel for its version of the Taylor Force Act, passed overwhelmingly by the Knesset on Monday night.

The law requires the state to deduct funds to the Ramallah government equivalent to the amount the PA pays out to convicted terrorists and the families of Palestinians killed while carrying out attacks. It was inspired by a similar law passed by the U.S. Congress known as the Taylor Force Act, after a victim of Palestinian terrorism.

PA spokesperson Nabil Abu Rudeineh accused Israel of crossing a “red line,” tantamount to a “declaration of war on the Palestinian people.”

Rudeineh threatened “serious repercussions,” and said that Palestinian leadership would convene soon to formulate a response “that would change the nature of the existing relations” between Israel and the PA.

“This is a very dangerous decision that amounts to the cancellation of the Palestinian Authority and is piracy and theft,” Erekat fumed to AFP. “Israel is stealing the land and money of the Palestinian people and that is a result of the decisions of President [Donald] Trump, who supports Israel.”

Likud MK Avi Dichter, a co-sponsor of the legislation, said ahead of the Knesset vote, that “the PA turned itself into a factory that employs murderers [of] Jews mostly but also Muslims, Christians, Druze, Circassians, and others, including tourists,” Dichter said ahead of the vote.

He said the law is intended to send a “moral and principled message” that Israel will not assist in sending money to terrorists, as well as to cause the PA to rethink its policy of “encouraging terror.”

Notwithstanding Palestinian reaction, Defense Minister Avigdor Lieberman announced on Tuesday the establishment of a national counterterrorism headquarters in the Ministry of Defense, to oversee implementation of the law. The headquarters will also be charged with coordinating economic countermeasures against terrorist organizations in Israel and abroad.

Australia, which suspended its financial aid to the PA until it can verify that the money, earmarked for humanitarian purposes, is not likewise used for terrorist stipends, also came in for Palestinian anger on Tuesday.

The PA denounced Australia’s decision as politically motivated and contending it “has no grounding in facts.”

In a statement, the Palestinian envoy to Australia, Izzat Abdulhadit, expressed “deepest disappointment and concern” over the decision.

He vouched for the PA, claiming that the “stringent auditing procedures” were applied in allocation of the funds, and that records of the World Bank trust fund could prove it.

“We have therefore concluded that this decision is political in nature, for its justification has no grounding in facts,” the statement said. “It has less to do with genuine concerns about terrorism and the stifled peace process than it does with domestic political expediency.”