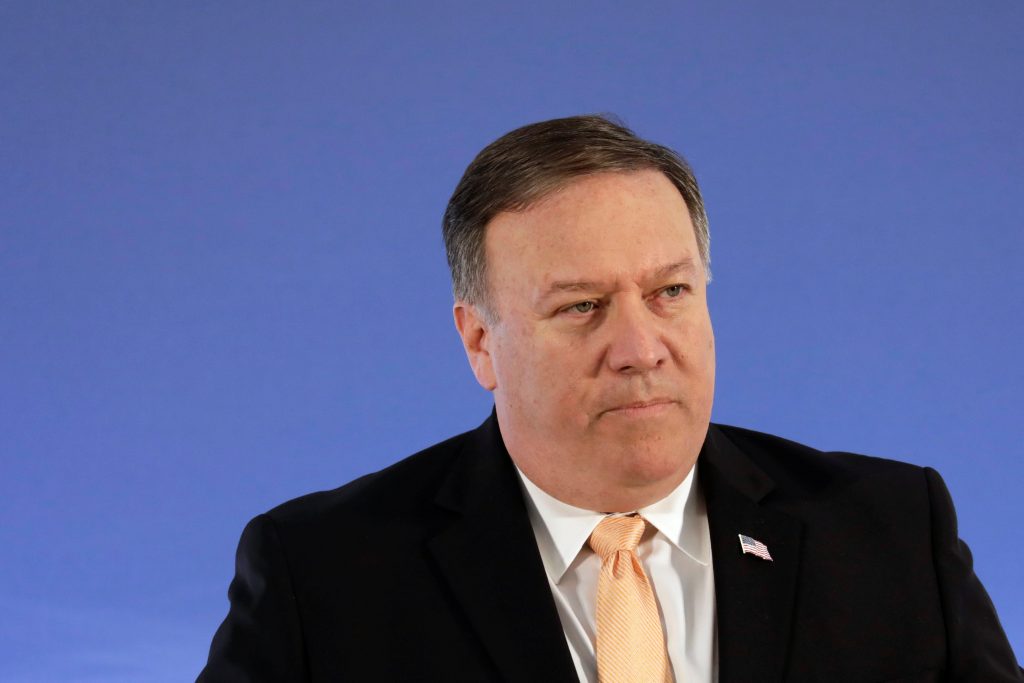 Secretary of State Mike Pompeo will make another trip to North Korea this week as the Trump administration continues talks to get Pyongyang to give up its nuclear weapons and ballistic missile programs.

The State Department said Pompeo would depart Thursday on his third trip to North Korea before visiting Japan, Vietnam, the United Arab Emirates and Belgium, where he will accompany President Donald Trump at the NATO summit.

The United States has a plan that would lead to the dismantling of North Korea’s nuclear weapons and ballistic missile programs in a year, Trump’s national security adviser John Bolton said, although U.S. intelligence reported signs that Pyongyang doesn’t intend to fully give up its arsenal.

Bolton said it would be to the North’s advantage to cooperate to see sanctions lifted quickly and aid from South Korea and Japan start to flow.

The State Department said the U.S. ambassador to the Philippines, Sung Kim, who led policy negotiations with North Korea before the summit, traveled to the Demilitarized Zone between the two Koreas on Sunday to resume talks on next steps in implementing the joint declaration Trump and North Korean leader Kim Jong Un signed in Singapore. In that summit declaration, the North committed “to work toward complete denuclearization of the Korean Peninsula.” The statement did not define how that would be achieved or say when the process would begin or how long it might take.

“Our goal remains the final, fully verified denuclearization of the DPRK, as agreed to by Chairman Kim in Singapore,” the department said Monday. DPRK stands for the North’s official name, the Democratic People’s Republic of Korea.

Bolton’s remarks on Sunday on CBS’ “Face the Nation” presented an ambitious timeline for North Korea to fulfill that commitment. Pompeo told reporters three weeks ago that the U.S. wants North Korea to take “major” nuclear disarmament steps within the next two years — before the end of Trump’s first term in January 2021.

Despite Trump’s rosy post-summit declaration that the North no longer poses a nuclear threat, Washington and Pyongyang have yet to negotiate the terms under which it would relinquish the weapons that it developed over decades.

Doubts over North Korea’s intentions have deepened amid reports that it is still producing fissile material for weapons.

The Washington Post on Saturday cited unnamed U.S. intelligence officials as concluding that North Korea does not intend to fully surrender its nuclear stockpile. Evidence collected since the June 12 summit in Singapore points to preparations to deceive the U.S. about the number of nuclear warheads in North Korea’s arsenal as well as the existence of undisclosed facilities used to make fissile material for nuclear bombs, according to the report.

It said the findings support a new, previously undisclosed Defense Intelligence Agency estimate that North Korea is unlikely to denuclearize. Some aspects of the new intelligence were reported Friday by NBC News.

A U.S. official told The Associated Press that the Post’s report was accurate and that the assessment reflected the consistent view across U.S. government agencies for the past several weeks. The official was not authorized to comment publicly on the matter and spoke on condition of anonymity.

Bolton on Sunday declined to comment on intelligence matters.

He said the administration was well-aware of North Korea’s track record over the decades in dragging out negotiations with the U.S. to continue weapons development.

“We have developed a program … about really how to dismantle all of their WMD and ballistic missile programs in a year,” Bolton said. “If they have the strategic decision already made to do that, and they’re cooperative, we can move very quickly.”

He said the one-year program the U.S. is proposing would cover all the North’s chemical and biological weapons, nuclear programs and ballistic missiles.

Even if North Korea is willing to cooperate, dismantling its weapons of mass destruction programs, believed to encompass dozens of sites, will be tough. Stanford University academics, including nuclear physicist Siegfried Hecker, a leading expert on the North’s nuclear program, have proposed a 10-year roadmap for that task; others say it could take less time.

Pompeo has already visited Pyongyang twice since April to meet with Kim — the first time when he was still director of the CIA.

Trump reiterated in an interview broadcast Sunday that he thinks Kim is serious about denuclearization.

“I made a deal with him. I shook hands with him. I really believe he means it,” the president said on Fox News.

Trump defended his decision to suspend “war games” with close ally South Korea — a significant concession to North Korea, which so far has suspended nuclear and missile tests and destroyed tunnels at its nuclear test site but not taken further concrete steps to denuclearize.

“Now we’re saving a lot of money,” Trump said of the cancellation of large-scale military drills that involve flights of U.S. bombers from the Pacific U.S. territory of Guam.

Pressure will now be on Pompeo to make progress in negotiations with North Korea to turn the summit declaration into action.

“Ambassador Bolton said, ‘If North Korea makes the decision to denuclearize, their ballistics programs could be dismantled in a year.’ There’s great momentum right now for positive change, and we’re moving together for further negotiations,” she said.