Business Toyota: Our Employees Are Not a Security Threat
Business 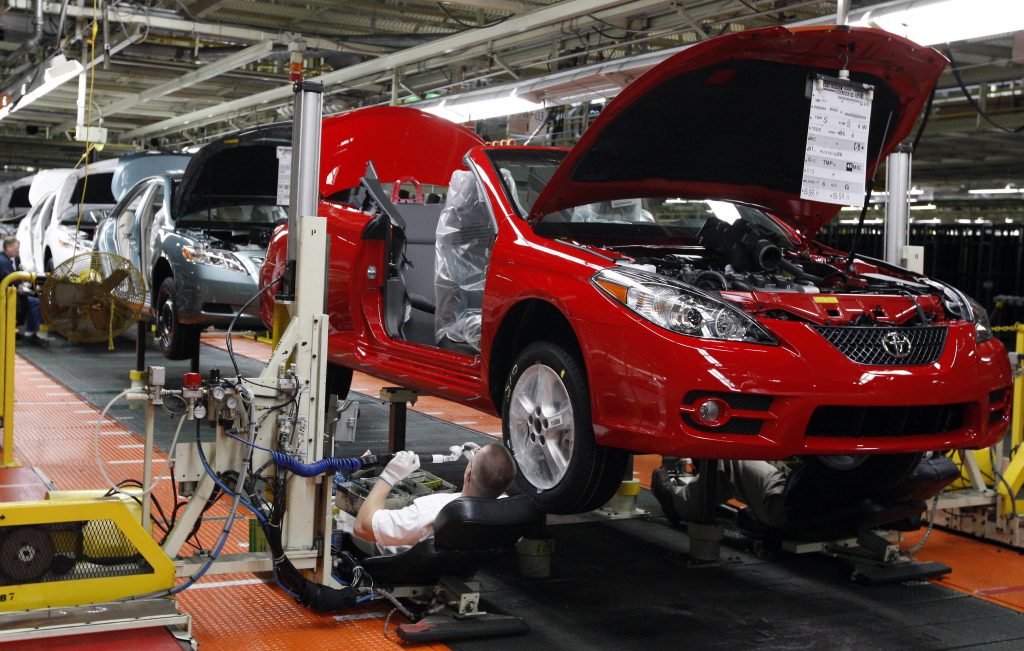 Such a tariff would “increase the cost of every vehicle sold in the country,” the Japanese automaker, the world’s largest automaker, said in a statement Thursday.

Even the Toyota Camry, built in Georgetown, Ky., would cost $1,800 more, the company said.

“Toyota operates 10 manufacturing plants in the U.S.,” the statement said. “We are an exemplar of the manufacturing might of America.”

The statement came just before a Friday deadline set by the U.S. Commerce Department for comments on whether car imports present a threat to national security. If the government deems that to be so, the Trump administration has floated a 25 percent tariff on imported cars.

On Friday, Toyota expanded on its objections in a submission to the Commerce Department.

The company, which runs its North American operations from a new headquarters in Plano, Texas, said its 137,000 American workers — employed either directly or by dealerships — do not pose a national security threat.

“We believe the only plausible outcome of this investigation is to reject the notion that automotive imports threaten national security,” the company said.

“Reduced sales would invariably lead to cuts in production which, in turn, will lead to the loss of American jobs — in the manufacturing sector, but also in sales, distribution, maintenance and finance,” the company said.

This year, Toyota’s North American CEO, Jim Lentz, said new steel and aluminum tariffs alone could increase the price of a car by as much as $400.

Analysts have said that if the tariffs are imposed, Toyota could be the hardest hit among the world’s automakers.

The proposed automobile tariffs are just President Trump’s latest trade gambit. He has also begun import levies on solar panels, washing machines, Canadian lumber and — most notably — steel and aluminum. The metal duties have spun the world into a growing trade war, with the U.S. and China threatening each other with tariffs on hundreds of billions of dollars’ worth of goods.

That overall approach has sparked significant concern in Texas, whose economy is deeply dependent on trade, especially with Mexico and Canada.

On Thursday, Gov. Greg Abbott wrote to Trump to urge him to reconsider the tariffs on steel and aluminum. The Republican, echoing Texans in both political parties, warned that the levies “may threaten future economic growth both in our state and across the country.”

President Trump’s administration is proposing the levies on national security grounds, even though the president somewhat undercut that argument this month by threatening the European Union with auto tariffs over more mundane concerns about long-standing trade barriers.

President Trump on Wednesday again lashed out at the EU over automobiles.

“America does not go to war in a Ford Fiesta,” the Association of Global Automakers wrote last week in a submission to the Commerce Department.

But it’s not the only concern for the automobile sector.

Tariffs typically aim to boost domestic producers and jobs. The steel industry, for example, has praised some of Trump’s trade actions. But car companies, domestic and foreign, are now multinational operations with production facilities all around the world.

The Association of Global Automakers, of which Toyota is a member, pointed to the North American Free Trade Agreement, explaining that the deal has facilitated a situation in which auto parts often cross borders multiple times in the manufacturing process.

The end result: Imports account for 44 percent of U.S. car sales. Half those imports are from Canada and Mexico. Those cars feature “significant U.S. content.”

“In short, NAFTA, and trade more generally, have strengthened the global competitiveness of the U.S. automotive industry, enabling U.S.-built vehicles to compete with vehicles built anywhere in the world,” the group wrote.

Toyota, in its response to the Commerce Department, also highlighted that point.

The company noted that “no vehicle in the United States, whether from Toyota, GM, Ford, FCA, Daimler or Hyundai, … is sole-sourced from exclusively U.S. parts and components.” That’s why the even the U.S.-made Camry would also be more expensive because of tariffs, it said.

“The Camry has about 30 percent non-U.S. content,” Toyota said.