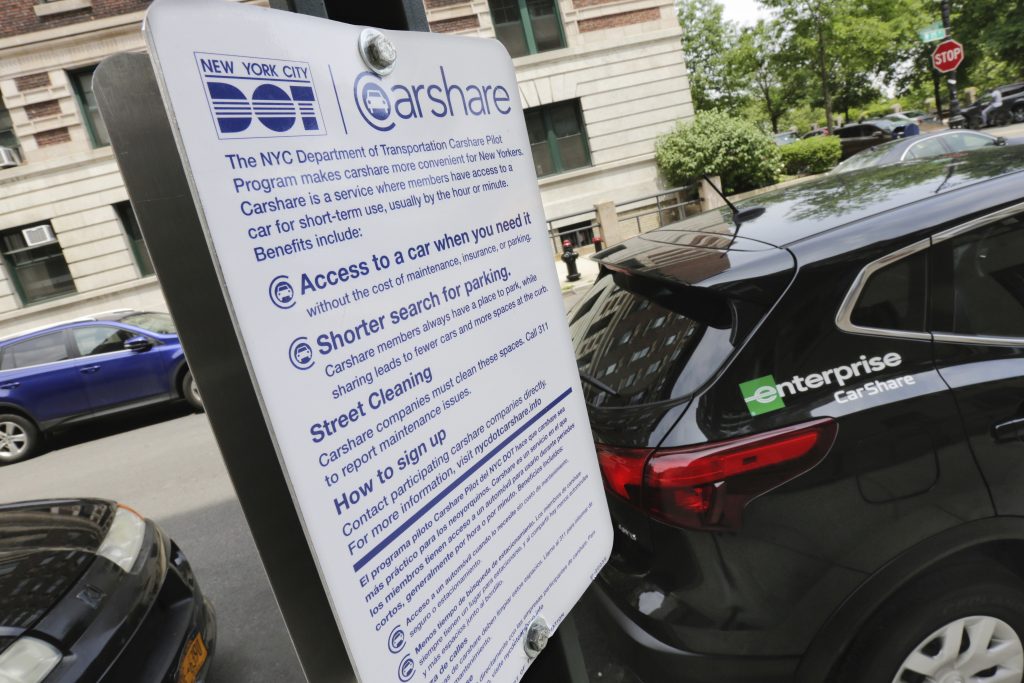 In a city where parking spots can be notoriously hard to come by, residents are at odds over a new arrangement that’s taking away hundreds of public spaces and doling them out to companies that rent out cars by the hour.

In the past few weeks, New York City began repurposing 230 curbside spaces for the exclusive use of Enterprise CarShare and Zipcar. Street signs warn interlopers against parking in them; violators are ticketed and towed. Another 55 spots in city-owned parking lots and 24 at public housing complexes also are being set aside for the companies.

The two-year pilot program is pitting proponents of car sharing, who see it as an efficient alternative to car ownership, against car owners, who fear fewer spaces will force them to circle the block even more.

“Parking is not an easy thing to find. Period,” said Jerry Armer, whose Cobble Hill, Brooklyn, neighborhood has seen 18 on-street spaces gobbled up for car sharing.

In his neighborhood, at certain times of the day, it isn’t unusual to have to circle for 30 minutes for an open spot, only to wind up a half-mile from home. New Yorkers also deal with the scourge of alternate-side-of-the-street parking, which involves having to move your car once or twice a week to make way for street cleaners.

The pilot program has elicited some grumbles over the price these for-profit companies are paying for exclusive use of these hard-to-get spots: almost nothing.

Zipcar and Enterprise are each paying a one-time $765 fee for the curbside spots and $1,000 to $1,200 per year for each space in the city-owned lots. Residents of city-owned public housing also will receive discounts on car sharing services.

Armer, a longtime member of a community board that acts as a liaison between residents and the city, said anxious neighbors have been peppering him with questions and complaints since the program was announced.

New York’s foray into publicly endorsed car sharing comes as it grapples with increased traffic on its roads and the looming closure, for long-term repairs, of a subway line that shuttles 225,000 people between Manhattan and Brooklyn each day.

Mayor Bill de Blasio pitched the city’s program as a way to ease congestion and cut pollution while expanding transportation options in a city where 56 percent of households do not own a car, according to a 2014 University of Michigan study, by far the most of any big city in the U.S.

“If this works, we’re going to take it citywide in a very aggressive way,” said de Blasio, sitting under a banner that read, “More sharing, fewer cars.”

Other cities have already embraced the concept.

San Diego has been dedicating parking spaces to car sharing for six years, Dallas has been doing the same in publicly operated parking lots for nearly four years and parts of downtown in Austin, Texas, are lined with car share-only zones.

A University of California study in 2010 found that there were nine to 13 fewer vehicles on the road for each car share vehicle in circulation because customers were more likely to refrain from purchasing a second vehicle or replacing an existing vehicle.

New York’s launch has hit a few speed bumps. Some cars parked in on-street car share spaces were towed soon after the signs went up, despite a two-week grace period. The city’s Department of Transportation said it was working to dismiss those tickets.

“It was really quite abusive in a way. People felt very violated the way that it was done,” said Amy Breedlove, president of the Cobble Hill Association. “They came in, jackhammered and put up a sign, and then the next thing traffic enforcement is in and they’re booting and towing.”