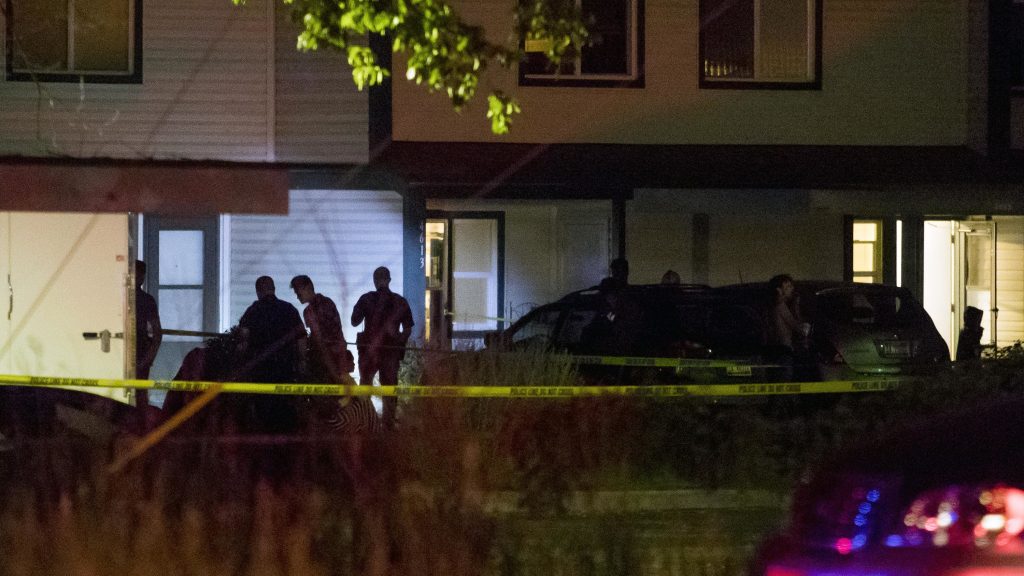 Nine refugees, including six children, have been injured after a man went on a stabbing rampage at a 3-year-old’s birthday party at an Idaho apartment complex, according to Boise, Idaho, police.

Police said they responded to a call shortly before 9 p.m. Saturday, local time, about a knife-wielding man at an apartment complex. Within five minutes, officers arrived and took a suspect into custody, police said.

However, officers soon found a “chaotic and tragic” scene, with nine victims “scattered across the apartment complex,” both inside and out of individual apartments, Boise Police Chief William Bones said at a news conference Sunday.

All were taken to a hospital, police said, and at least four had life-threatening injuries.

Bones fought back tears as he revealed the ages of the injured children: There had been a 3-year-old, two 4-year-olds, a 6-year-old, an 8-year-old and a 12-year-old “from different continents” gathered that night to celebrate a child’s birthday, he said. Three adults who tried to intervene were also injured, he said.

“It’s just something we don’t see in Boise, the level of violence which occurred here,” an emotional Bones told reporters. “Most hard on myself … is when you see innocence targeted and the suffering which occurs, and when that involves children, it’s something that gets to each of us … It tears your heart apart.”

Bones said the refugees were from Syria, Iraq and Ethiopia, and were “the newest members of our community.”

“This was a brutal crime, not just against the individuals involved, but against the families and the very fabric of our community,” Bones said.

As of Sunday afternoon, each of those victims has survived, though several of the injuries remained serious, he said. One victim had been flown to Salt Lake City, he added.

“We are by no means out of the woods,” Bones said. “The level of some of the injuries will be life-altering in a very negative way for some of the victims.”

The Idaho Statesman reports that the apartment complex caters to low-income families and is operated by a Boise nonprofit.

“It’s a very tight-knit community in the apartment complex,” Bones told the newspaper. “I’d ask for our community’s hearts to go out, as I know they will. For their prayers for the families.”

The Ada County Sheriff’s Office on Sunday identified the suspect as 30-year-old Timmy Earl Kinner of Los Angeles. Kinner, who is not a refugee, was a “temporary resident at the apartment complex … until he was asked to leave on Friday” because of his behavior, police said.

Kinner did leave the complex, but then returned Sunday “to exact vengeance, not just on those he had been with … but at any target which was available,” according to Bones.

A few doors down from where Kinner had been staying was where the group of refugees had gone to celebrate a 3-year-old girl’s birthday, the police chief said. That was where Kinner reportedly directed his attack, targeting the children first, he said.

The birthday girl was among those seriously injured in the stabbing, Bones said.

Bones said police recovered a “large folding blade knife” from a nearby canal that is believed to be the weapon used in the stabbing. Kinner has an “extensive criminal record spanning multiple states” and was “not being entirely cooperative” with the investigation, Bones said. Kinner’s criminal history includes weapons violations and violence against others, Bones said.

Jail records for Kinner showed he was arrested early Sunday morning and charged with nine counts of aggravated battery and six counts of injury to a child. A court appearance for Kinner is scheduled for Monday.