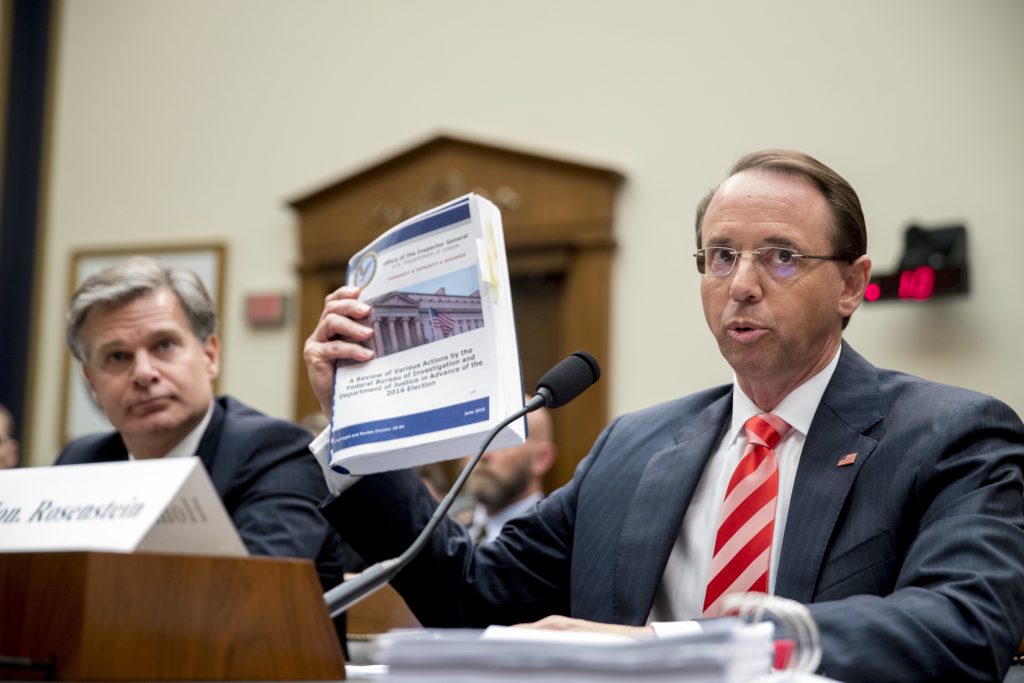 Deputy Attorney General Rod Rosenstein squared off Thursday with Republican lawmakers who accused him of misconduct and stonewalling — claims he angrily denied — in an ongoing feud over the FBI’s investigations into Hillary Clinton and President Donald Trump.

The tense exchanges at a hearing of the House Judiciary Committee were interrupted by a House vote on a resolution meant to publicly rebuke Rosenstein over what lawmakers consider is his failure to turn over investigative documents related to both cases. The measure, which passed 226-183, calls on the Justice Department to “comply with requests including subpoenas” by July 6.

Thursday’s hearing featuring Rosenstein and FBI Director Christopher Wray was billed as an examination of an inspector general’s report that found serious failings in how federal law enforcement handled a high-profile investigation into Clinton’s use of a private email server while she was secretary of state. But it mostly centered on Rosenstein — and Republican accusations that he has withheld key details about the politically sensitive investigations.

Rosenstein insisted to the committee that the department has “hundreds of people working around the clock trying to satisfy this request,” and that the vote demanding the papers be produced quicker would not affect that work.

Reps. Jim Jordan, R-Ohio, and Mark Meadows, R-N.C., authors of the House resolution, have suggested that if Rosenstein does not comply with their demands by their stated deadline, they will pursue contempt charges against him — even though GOP leaders have not indicated a willingness to take such punitive steps at a time when the Justice Department is trying to produce the records.

At the hearing, Jordan peppered Rosenstein with accusations, asking, “Why are you keeping information from Congress?”

“I don’t agree with you, congressman,” he said. “That is not accurate, sir.”

“Mr. Jordan, I am the deputy attorney general of the United States. I’m not the person doing the redacting,” Rosenstein answered.

As Jordan interrupted Rosenstein to level more accusations, Rosenstein snapped back: “Your use of this to attack me personally is deeply wrong … I’m not trying to hide anything.”

Jordan responded: “It’s not personal,” as the two continued to argue and Democrats on the panel attempted to interject in Rosenstein’s defense.

“We’ve seen the bias, we need to see the evidence,” Gowdy said. “If you have evidence of wrongdoing by any member of the Trump campaign, present it to the … grand jury. If you have evidence that this president acted inappropriately, present it to the American people. There’s an old saying that justice delayed is justice denied. I think right now all of us are being denied. Whatever you got, finish it … up, because this country is being torn apart.”

Rosenstein responded that he shared Gowdy’s concerns but added: “With regard to the investigation, I’ve heard suggestions that we should just close the investigation. I think the best thing we can do is finish it appropriately and reach a conclusion.”

Rep. Ron DeSantis, R-Fla., pressed Rosenstein to explain why he hadn’t recused himself from overseeing Mueller, given that Rosenstein authored a memo justifying the firing of James Comey as FBI director last year — events that are now being investigated by Mueller.

“I can assure you that were it appropriate for me to recuse, I’d be more than happy to do so and let somebody else handle this,” Rosenstein said, grinning.

The hearing is the first time Rosenstein has publicly answered lawmakers’ questions about Inspector General Michael Horowitz’s report, which blasted Comey and found that top bureau officials assigned to both the Clinton email case and the investigation into Russia’s election interference had shown a “willingness to take official action” to prevent Trump from becoming president.

Wray testified about the matter before the Senate Judiciary Committee last week.

Republicans and Democrats on the House Judiciary Committee have sparred over Horowitz’s findings, with Republicans suggesting that anti-Trump sentiment at the FBI had more far-reaching consequences than the inspector general acknowledged. Democrats point to his finding that bias did not ultimately impact prosecutors’ decision not to charge Clinton with a crime.

Horowitz appeared by himself at a hearing before the committee last week.

Strzok’s attorney has disputed that conclusion and argued that Strzok’s actions served only to hurt Clinton and benefit Trump. Strzok testified privately for several hours before the House Judiciary Committee on Wednesday.