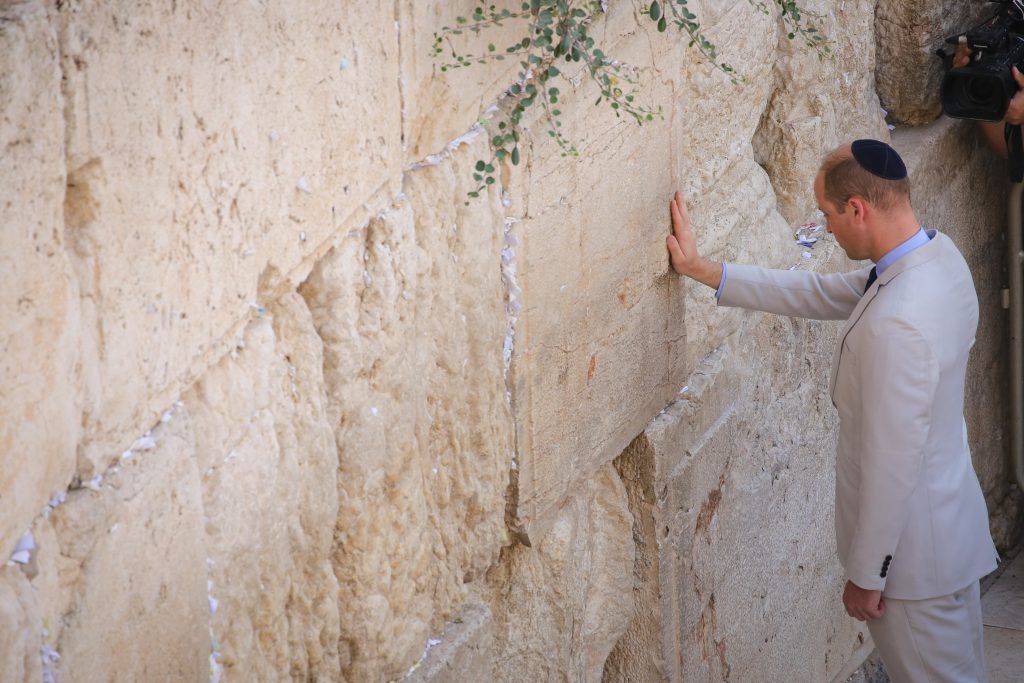 Prince William toured sensitive holy sites in Yerushalayim on Thursday and paid a pilgrimage to the tomb of his great-grandmother on the final day of his historic royal visit to the Middle East.

The Duke of Cambridge’s Jerusalem leg was by far the most charged of his five-day tour of Jordan, Israel and the Palestinian territories, as he ventured into the heart of world religion and regional politics.

The trip has been carefully orchestrated as a non-political event, and the prince has been watchful in his words and actions not to stoke controversy as he met with Israeli and Palestinian leaders and toured the region’s various locales. But the Yerushalayim sites he visited are central to the century-old conflict and every step he took was closely scrutinized.

Prince William began his visit with a lookout of the Old City from Har Hazeisim. He then visited the nearby gravesite of his great-grandmother, Princess Alice, who saved Jews in the Holocaust and whose last wishes were to have her remains buried in a church in the Old City.

The prince stood solemnly by his great-grandmother’s grave, accompanied by a Russian Orthodox clergyman. He was then given several gifts by the clergy, including a bouquet of flowers. With the homage, William followed in the footsteps of his father Charles, the Prince of Wales, and grandfather Philip, the Duke of Edinburgh, who had also visited Princess Alice’s grave.

From there, Prince William was taken to visit a trio of key Muslim, Jewish and Christian holy sites before returning home to London. Prince William said he was particularly looking forward to the Old City visit.

At the Kosel, he was accompanied by the Rabbi of the Kosel, Rabbi Shmuel Rabinovitch, and security guards as he approached the Wall. Donning a kippah, he placed his right hand on the ancient stones and then, following tradition, slipped a note inside its cracks.

He signed the guestbook with the following passage: “May the G-d of peace bless this region and all the world with peace”.

Chief Rabbi of Britain Ephraim Mirvis, who accompanied the prince on his visit, commented that “The Western Wall stands at the epicenter of our faith. To see the future monarch come to pay his respects was a remarkable gesture of friendship and a sign of the duke’s regard for the sanctity of Jerusalem.”

William had been to the Kosel before, but only as a private citizen. This was the first time any member of the British royal family made a visit to the Kosel during an official visit.

Afterwards, he headed to Ben-Gurion International Airport and departed back to London.

Kensington Palace officials had made every effort to avoid controversy, and they mostly succeeded. But a minor contretemps arose before the end of the visit over his refusal to meet with Yerushalayim Mayor Nir Barkat in Yerushalayim.

British Embassy officials reportedly informed the mayor that His Royal Highness could not do so, but invited Barkat to a reception at the British ambassador’s residence in Ramat Gan instead.

Although the prince had met with both Prime Minister Binyamin Netanyahu and President Reuven Rivlin in Yerushalayim, it was apparently thought that sitting down with the mayor would imply a certain informal recognition of Israeli sovereignty in the city, not in keeping with either British policy or the non-political nature of the trip.