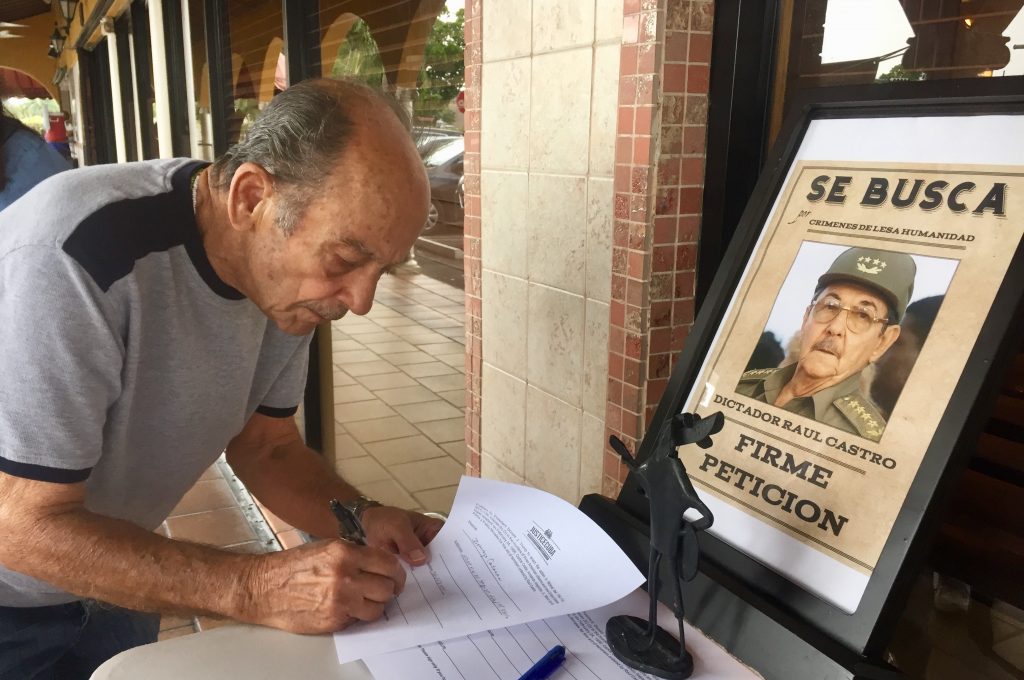 Some Cuban exile groups and their political allies have begun to sound a steady drumbeat for tougher sanctions against Cuba, including an effort to indict Raul Castro for the 1996 shoot-down of two Brothers to the Rescue planes as they approached the Cuban coast.

In recent weeks, Florida Sen. Marco Rubio and Rep. Mario Diaz-Balart asked President Donald Trump to launch an investigation into whether Castro should be indicted; a group of Cuban-American leaders sent a letter outlining 10 get-tough initiatives, including pursuing the indictment of Castro; and Rep. Ron DeSantis, a Florida Republican, held a congressional hearing that concluded with a declaration that indicting Castro, 87, “will send a very strong signal that this administration means business.”

“It is now time to finish the job of reversing the policies implemented by the Obama administration,” Marcell Felipe, a lawyer and chairman of the Inspire America Foundation advisory board wrote to President Trump on the first anniversary of the president’s June 16, 2017, reset on Cuba policy. Inspire America, a super PAC whose goal is supporting democracy in Cuba, has asked Trump to “allow federal prosecutors discretion” to indict Castro, who headed Cuba’s armed forces when the planes were shot down on Feb. 24, 1996.

Cuba scrambled two MiG fighter jets that blasted the planes from the sky while they were still in international waters, resulting in the deaths of Armando Alejandre Jr., Carlos Costa, Mario de la Pena and Pablo Morales. The Miami-based Brothers to the Rescue scoured the Straits of Florida to locate Cuban rafters in need of help during the 1990s. But in the months leading up to the tragedy, some pilots had branched out, dropping anti-Castro bumper stickers, leaflets and religious medals over Havana.

Cuba had warned the United States if the incursions didn’t stop, they might shoot down the planes.

Last weekend, the Assembly of Cuban Resistance (Asamblea de la Resistencia Cubana), a coalition of various exile groups, took to the streets of Hialeah and Miami’s Little Havana neighborhood to collect more signatures on a petition to indict Castro not only for the shoot-down but also for “crimes committed with his support and intervention in Venezuela and now in Nicaragua.”

Outside La Carreta restaurant in Hialeah, some of the customers finished off their Saturday morning breakfasts by signing petitions at a table where a mock wanted poster for Raúl Castro had been set up. By noon, more than 300 people had signed the petition that urges Trump to follow a section of the Helms-Burton Act to seek Castro’s indictment in the U.N.’s Court of International Justice.

So far more than 4,000 signatures have been collected, according to organizers.

“I think we have an administration that’s not as favorable to Raul Castro — even though it hasn’t done too much on Cuba. But we expect to be effective this time,” said Pedro Solares, a member of Directorio Democratico Cubano, a pro democracy group that’s part of the Asamblea coalition.

Another reason exile groups have revived the indict-Castro effort now is they think that since he’s no longer head of state it might be easier to get an indictment. Miguel Diaz-Canel became president on April 19, but Castro still remains head of Cuba’s Communist Party.

There have been precedents such as Panamanian dictator Gen. Manuel Noriega, who came before a court in Miami in 1989, and former Peruvian President Alberto Fujimori, who was extradited from Chile in 2007 to face corruption charges in Peru. Noriega, however, was the de facto ruler of Panama, not the president, at the time of his indictment for taking millions in payoffs to make secure airstrips available to drug traffickers.

It’s not the first time there’s been a petition-writing campaign to try to indict Castro. In 2001, various exile groups collected more than 100,000 signatures on a petition to indict both the late Fidel and Raul Castro. They tried to interest the U.S. attorney’s office in Miami, but the effort fizzled.

In 2008, when George W. Bush was in the White House, exile groups also delivered petitions asking for the indictment of Fidel Castro because they said he no longer had immunity as a head of state. By that time Raul Castro had already officially replaced his brother, who fell ill in 2006.

But even if Raul Castro were indicted, getting him to the United States to stand trial poses a seemingly insurmountable hurdle — and some of the petition-gatherers realize that. “If he gets indicted, we won’t be able to get him here, but he won’t be able to leave the country either. It would be a symbolic victory,” Solares said.

A grand jury in Miami indicted Cuban air force chief Gen. Ruben Martinez Puente, who was head of Cuba’s air defense, and the brothers Lorenzo and Francisco Perez-Perez, the two MiG pilots involved in shooting down the planes, on murder and other charges in 2003, but they have never been brought to trial. Gerardo Hernandez, the leader of a Cuban spy ring, was sentenced to life in connection with the shoot-down but was returned to Cuba in 2014 as part of a prisoner exchange.

“Is it going to be easy? No, it’s not,” said Jason Poblete, a Washington attorney who testified at the DeSantis hearing. But he said the timing is important with Fidel Castro dead, and Raul Castro aging. “He’s no longer head of state and he can no longer wrap himself as easily in sovereign immunity,” said Poblete.

Even with little likelihood that Castro would ever be brought to trial, he said an indictment is important. “He won’t be able to travel. It does have an impact and a deterrent effect that sends the message sooner or later we’re going to come for you,” he said.

“I also think there’s more receptivity to doing this now because Trump is a person who will tackle tough issues,” Poblete said in an interview.

DeSantis, who chairs the House Oversight Committee’s national security subcommittee, held a hearing last week on “Holding Cuba Leaders Accountable,” but its focus was the indictment of Castro.

When William LeoGrande, an American University professor, was contacted by a Democratic staff member to testify, he was told his testimony should center on the value of engagement with Cuba. “I didn’t realize the sole purpose of the subcommittee hearing was to launch a campaign to indict Raul Castro,” he said. “The hearing was political theater.”

He told the subcommittee: “I believe more has been gained, and more can be gained, through a policy of engagement and cooperation on issues of mutual interest than through a policy of hostility and heightened sanctions, real or symbolic.” While pursuing indictments “might be symbolically satisfying to some,” he said, it could “impede existing law enforcement cooperation, which has been improving.”

But Poblete called the Brothers to the Rescue shoot-down an example of “justice delayed” that “has harmed the cause of justice throughout the Americas. It is an invitation to autocrats to target Americans, as has been the case recently in Venezuela and Nicaragua.”

Miriam de la Pena, mother of pilot Mario de la Pena, and Ana Alejandre Ciereszko, sister of Alejandre, the spotter aboard the plane known as Seagull Mike, were among those who testified. “Their killers are known, but sadly they remain unpunished,” de la Pena said. “Perhaps declassifying additional information will aid in the pursuit of justice.”