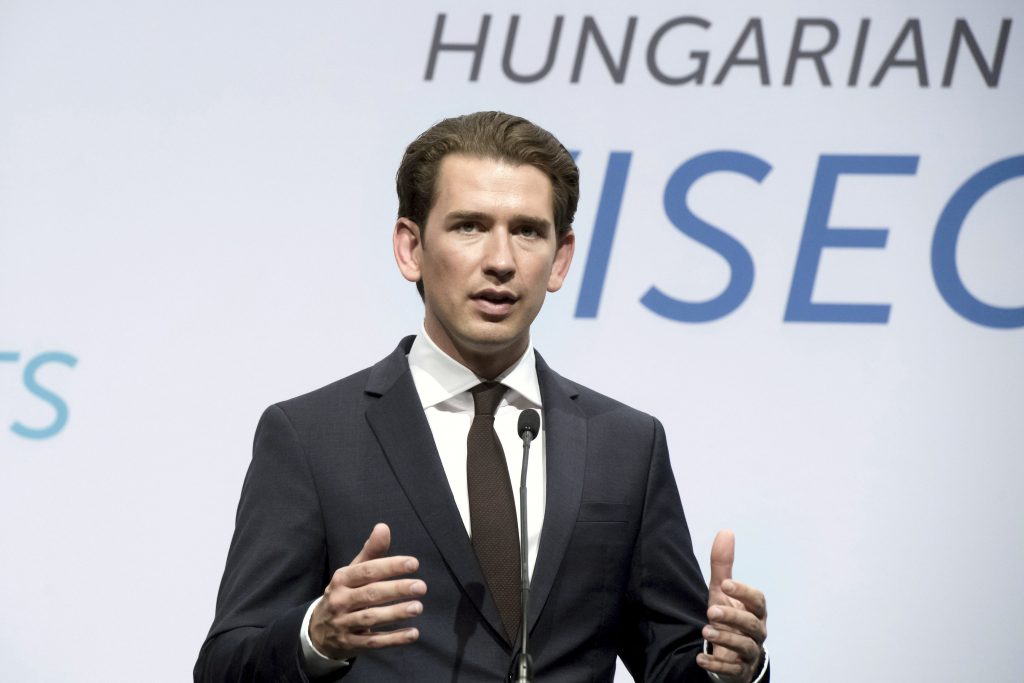 By 24, Sebastian Kurz was a member of the Austrian Cabinet. By 27, he was his country’s foreign minister. And by 31, the debonair university dropout with the slicked-back mane and the celebrity grin became the world’s youngest leader.

Now, just six months into his term as chancellor, Kurz is seizing a febrile moment in European politics to make himself into one of the continent’s true power players.

In the next few weeks alone, he is trying to seal off Europe from asylum seekers arriving by sea, orchestrate a summit between President Donald Trump and Russian President Vladimir Putin and, critics say, undermine Germany’s Angela Merkel, the most consequential European leader of the past decade.

The 63-year-old, four-term Merkel could see her government collapse as soon as this weekend. If it does, she will have mutinous members of her own conservative bloc to blame. But equally important will be the role of Kurz, who has repeatedly appeared in public with the German rebels to bolster their zero-tolerance immigration stance and not so subtly take aim at his fellow chancellor.

“You don’t do what he’s doing if you don’t want to be part of the conflict,” said Cengiz Günay, deputy director of the Austrian Institute for International Affairs. “It looks like he’s interfering in German politics.”

It looks that way to the Germans, too.

“There seems to be a new kind of cross-border coalition between politicians, but also media outlets and individuals, who have decided to push Chancellor Merkel out of her position,” said a nonpartisan senior German official who spoke on the condition of anonymity to discuss a sensitive matter. “Chancellor Kurz comes across as one of the biggest forces behind this plan.”

Kurz’s allies vehemently disagree that he is trying to meddle in a country that has 10 times the population of Austria or that he wants Merkel gone. But there is little question that he is, at the very least, using Merkel’s vulnerability to gain leverage in a battle for European influence.

At stake is not only the fate of Merkel’s 13-year-run as chancellor. At a time when the left barely registers in the top echelons of European power, the most important contest shaping the continent’s direction is a struggle between competing visions on the right.

On one side is Merkel, a master of consensus and survival who was shaped by her youth behind the Iron Curtain and is perhaps best known for welcoming more than a million asylum seekers to her country in 2015-2016. Merkel, who leads the center-right Christian Democratic Union, has fiercely resisted concessions to the anti-immigrant far right even as its popularity has surged on her watch.

On the other side is Kurz, a millennial who came of age in post-Cold War Europe and who claims credit for shutting down the asylum route that he blames Merkel for popularizing. Leader of Austria’s center-right People’s Party, he swept to power last fall by mimicking the far-right’s policies on the campaign trail, then chose as his coalition partner a far-right party that has frequently engaged in anti-Muslim and anti-refugee rhetoric.

The Trump administration has made clear where its sympathies lie. On the day last week when Merkel’s crisis was growing most acute, Trump tweeted gleefully that Germans were “turning against their leadership.”

Trump’s ambassador to Germany, Richard Grenell, meanwhile, has celebrated Kurz – who is likely to host Trump and Putin in Vienna next month for their first summit- “ a … star.”

It’s a description that even the chancellor’s toughest Austrian critics acknowledge as apt given his charisma and fine-tuned messaging.

“He’s the [celebrity] of the new right,” said Johannes Vetter, who ran the center-left Social Democrats’ campaign against Kurz last fall. “Unless there’s an earthquake, for the next nine years we have no doubt who will be the chancellor.”

But beneath Kurz’s smooth veneer, Vetter sees a familiarly divisive brand of politics. The chancellor, Vetter said, has only one issue, and he plays it relentlessly and opportunistically: migration. “He’s like Donald Trump in a slim-fit suit,” Vetter said.

Fortunately for Kurz, migration is the issue of the moment in Europe. And he’s proven adept at channeling the continent’s angst with a Fortress Europe-esque plan to halt the flow of asylum seekers across the Mediterranean that he has said will be at the center of his agenda when Austria takes over the rotating European Union presidency Sunday.

Kurz has found allies for his vision in the populist new Italian government, which has blocked migrant rescue ships from making landfall, and within the Christian Social Union (CSU), the Bavarian branch of Merkel’s conservative coalition. This month, he stood side by side with German Interior Minister Horst Seehofer – a CSU heavyweight – to warn against another “catastrophe.” That was a pointed reference to Merkel’s decision to open German borders – at Austria’s quiet urging – to people fleeing war, oppression and poverty starting in 2015.

Although numbers are dramatically down since then, with flows shifting from the western Balkans to the far more treacherous central Mediterranean, Kurz said an “axis of the willing” from Berlin to Vienna to Rome would work together to prevent a recurrence.

Awkwardly, Merkel is not part of the alliance. Instead, she balked at Seehofer’s plan to start turning back asylum seekers at the border. Thus began a showdown that could tear her government apart.

To avoid that fate, she will need concessions from her fellow European leaders – Kurz included – at an EU summit later this week. `

But Kurz’s words and actions suggest he’s more interested in emboldening the German rebels than he is in bailing out Merkel. Even as she was trying to keep her government together last week, Kurz was hosting a high-profile joint cabinet meeting with the CSU.

On Tuesday, his government carried out border patrol training exercises to prove it could block asylum seekers from entering the country. Kurz told the German tabloid Bild that the border measures would kick in if Seehofer limits access to Germany – a move the chancellor described as welcome because it “could trigger a domino effect which will deter illegal migration.”

Merkel has said she’s determined to avoid such a chaotic outcome – just as she was in the spring of 2016 when Kurz, as foreign minister, preempted her efforts to reach a Europe-wide strategy by shutting Austria’s borders along the western Balkan migration route, setting off a chain reaction that stranded people farther down the trail.

Now as then, Merkel has struggled to achieve consensus. Without progress at this week’s European summit, Seehofer has said he will unilaterally implement the border controls. That would force Merkel to either fire him or back down. Either way, it could imperil her grip on power.

Members of Kurz’s party say destabilizing Merkel is not their goal. But they also note with pride that the German leader has been forced to shift in her Austrian counterpart’s direction – including on the question of forcing asylum seekers to make their claims at centers in North Africa rather than Europe.

“When Kurz started to talk about camps outside the EU, she was not positive about it. But now she sounds quite different,” said Reinhold Lopatka, a Kurz ally in parliament. “It’s essential for her to reach agreement, and she knows it.”

Kurz, Lopatka said, is well aware that he can’t be the dominant leader in Europe, given Austria’s small stature relative to Germany and France. But he also said Kurz sees himself as one among a new generation of leaders that is putting its stamp on the continent and ending reflexive German dominance.

“For years, if you wanted to call Europe, you had to call Merkel,” he said. “Now there’s been a change.”