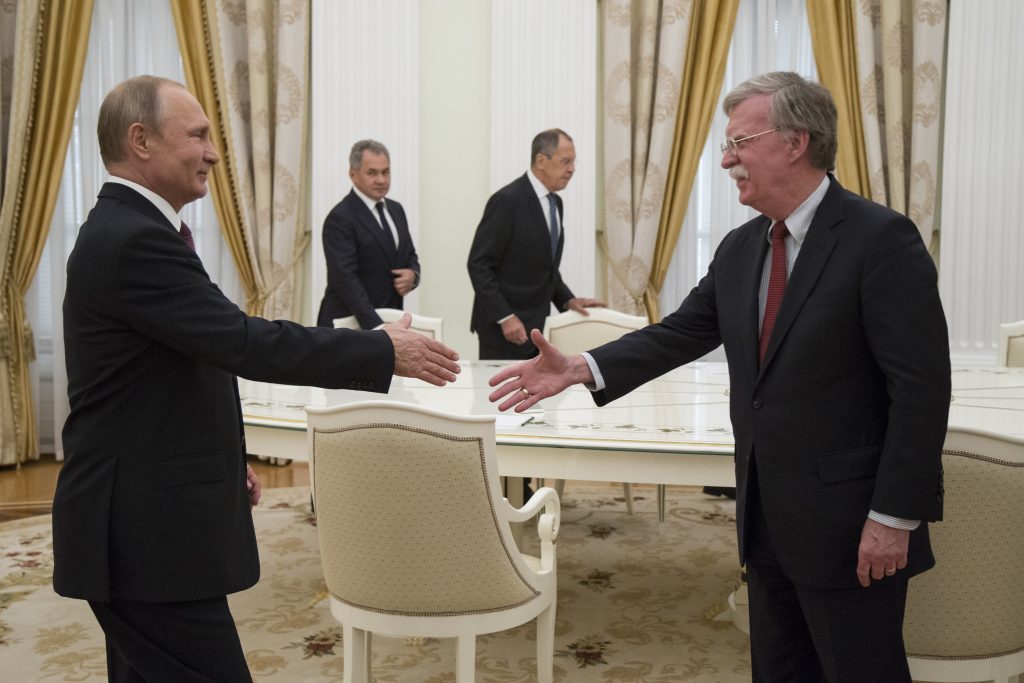 The White House and the Kremlin have agreed on a time and place for a summit meeting between President Donald Trump and Vladimir Putin, White House national security adviser John Bolton confirmed Wednesday after talks here with the Russian president and other officials.

In a news conference, Bolton said President Trump had asked him to speak to Russian authorities about the prospect of such a meeting.

“There will be an announcement on that tomorrow simultaneous[ly] in Washington and Moscow” on the date and place of that summit, Bolton said.

Earlier, Kremlin foreign policy adviser Yuri Ushakov also told reporters that the details of the much-anticipated meeting would be announced Thursday. The meeting is expected to take place in mid-July, when Trump will be in Europe for previously scheduled visits to Belgium and Britain. The Putin-Trump meeting will be held in a “third country,” Ushakov said.

Putin opened the meeting by repeating to Bolton his frequent contention that U.S.-Russian relations are in a poor state in large part because of the domestic political environment in the United States.

“Your visit here to Moscow inspires hope that we will be able to take first steps to restore full-fledged relations between Russia and the United States,” President Putin said. “Russia never sought confrontation, and I hope that today we will be able to talk about what we can do from both sides in order to restore full-fledged relations on the foundation of equality and of respect for each other’s interests.”

Bolton in turn said he hoped Russia and the United States could find “areas where we can agree and make progress together.” He quipped that he looked forward to “hearing about how you handled the World Cup so successfully,” drawing a big smile from the Russian president.

“Even in earlier days when our countries had differences, our leaders and their advisers met,” he added. “I think that was good for both countries, good for stability in the world, and President Trump feels very strongly on that subject.”

Bolton is in Moscow ahead of an expected meeting between Putin and Trump in mid-July. Bolton also met with Russian Foreign Minister Sergei Lavrov. Lavrov, Ushakov, and Defense Minister Sergei Shoigu then joined the meeting with Putin.

White House press secretary Sarah Huckabee Sanders confirmed in a tweet that the meeting would revolve around a possible summit.

“While in Moscow today, Ambassador Bolton is meeting with President Vladimir Putin and other senior Russian officials to discuss United States-Russia relations, as well the potential for a Presidential meeting,” she wrote.

There had been some speculation about whether the meeting between Bolton and Putin would even take place. Before he joined the White House in April, Bolton had made a number of critical comments about Russia, calling its interference in U.S. elections an “act of war” and suggesting that Putin had lied in the past.

Asked about those remarks at his Moscow news conference Wednesday, Bolton replied: “I appreciate all this research into my prior writings.” He said he does not address what he has said and written in the past: “It’s all out there.” He added that he expects the issue of Russian political interference to be “a subject of conversation between the two presidents” when they meet.

Secretary of State Mike Pompeo said last week that Presidents Trump and Putin will likely meet “in the not too distant future” following Bolton’s visit to Moscow. Russian officials have sought such a meeting for months and have blamed U.S. domestic politics for the difficulty in making it happen. Trump himself has also pushed for a meeting with Putin despite resistance from senior political aides and diplomats.

The Trump-Putin summit would be the first meeting of the two presidents not taking place on the sidelines of a broader international gathering. It would garner intense scrutiny because of special counsel Robert Mueller’s investigation into possible collusion between Moscow and Trump’s 2016 presidential campaign. And it could overshadow the July summit meeting of the North Atlantic Treaty Organization, raising fresh questions about Trump’s commitment to America’s traditional alliances.

The Trump-Putin meeting is expected to take place while Trump is in Europe in mid-July. He is scheduled to attend the NATO summit meeting July 11 and 12 in Brussels and to visit Britain on July 13. Kremlin spokesman Dmitry Peskov declined to comment on news reports that a Trump-Putin meeting could take place in Vienna or Helsinki.

Bolton is scheduled to hold a news conference in Moscow early Wednesday afternoon Washington time. Trump administration officials say that despite disagreements with Russia, there are areas such as counterterrorism where Washington and Moscow can find common ground.

Pompeo told MSNBC host Hugh Hewitt last week that the United States is working “to find places where we have overlapping interests but protecting American interests where we do not.”

“The president’s been unambiguous since he took office that there are places where Russia is working against the United States but many places where we work together,” he said.