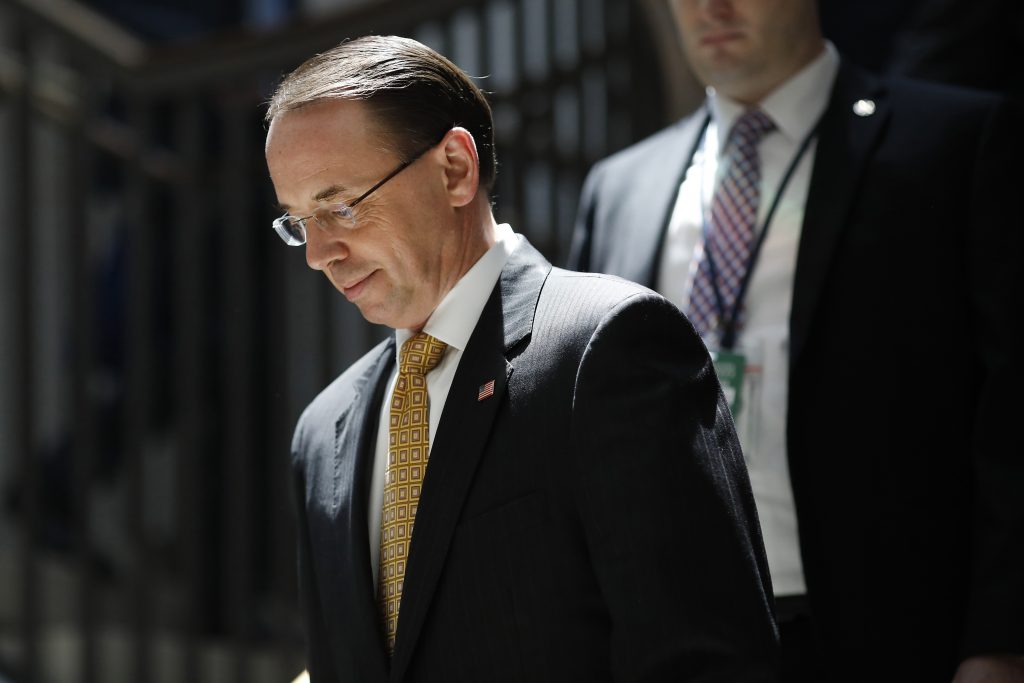 The House Judiciary Committee voted along party lines Tuesday to escalate pressure on Deputy Attorney General Ron Rosenstein to hand over material, including some related to the origins of the investigation into whether President Donald Trump colluded with Russia’s meddling in the 2016 election.

The next step would be for the full House to vote, which could come within the next month, although it’s unclear how Republican leaders plan to handle the measure.

“Here’s the bottom line: We are sick and tired of the Department of Justice giving us the runaround,” said Rep. Jim Jordan, who sponsored the measure with Rep. Mark Meadows, chairman of the House Freedom Caucus.

Among the documents demanded is an unredacted copy of an August 2017 memo outlining the jurisdiction and scope of special counsel Robert Mueller’s Russia probe. The Republicans say the memo added details to an earlier version, and they want to know why those changes were made.

Top committee Democrat Jerrold Nadler called the resolution “a bad-faith effort by members of the majority” that he says is being orchestrated by Intelligence Committee Chairman Devin Nunes. Nadler said that the real aim is to sabotage or undermine Mueller’s probe into whether there was “a possible criminal conspiracy with the government of Russia to rig an election.”

The measure’s Republican sponsors wouldn’t specify what punitive action would be taken against Rosenstein, or anyone else, if the measure is passed by the full House and they decide he hasn’t complied.

Jordan said “all options are on the table” when someone “tells the House of Representatives to take a hike,” including action for contempt of Congress or even impeachment.

The measure is needed for the committee to “conduct meaningful oversight” of the Justice Department and FBI, including looking into potential surveillance or other “abuses,” said Judiciary Chairman Robert Goodlatte. He said his committee will further press for the material during a scheduled public hearing Thursday with Rosenstein and FBI Director Christopher Wray.

Senate Judiciary Chairman Chuck Grassley said Tuesday that he isn’t yet convinced there’s been a cover-up of the Justice Department’s actions at the start of the Russia investigation, but he’s starting to get suspicious.

“I’d have to have more evidence to draw that conclusion,” he said. “But when you have certain things that are common sense that we ought to have access to — information, documents, etcetera — it kind of makes you suspicious that they might be trying to cover up. But do I have proof of cover-up? No.”