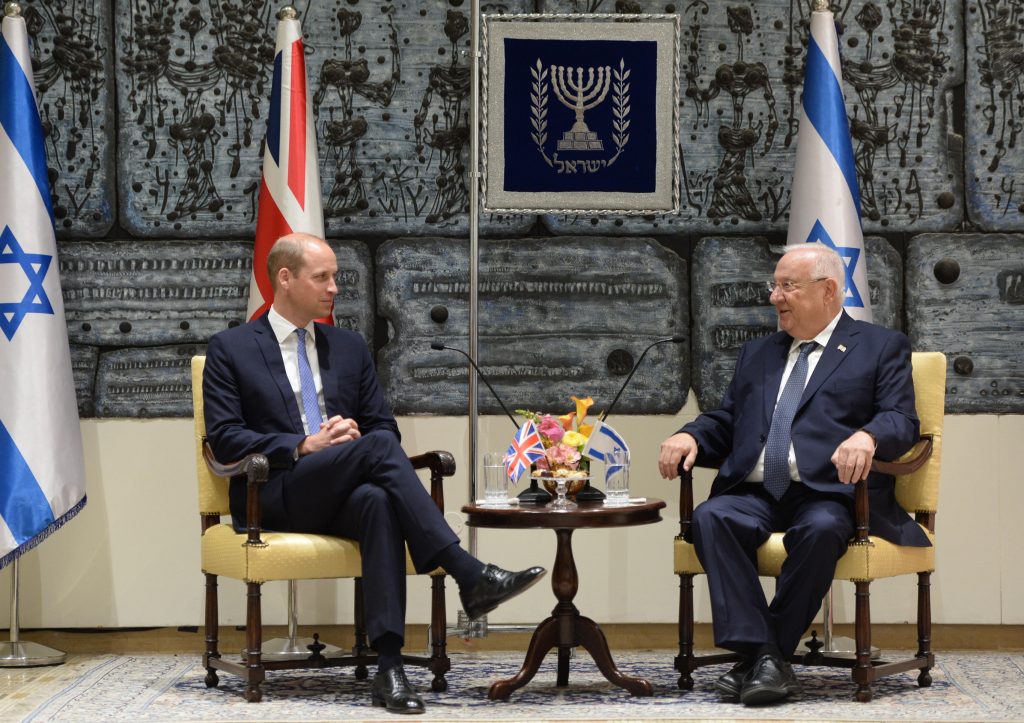 Prince William found it impossible to keep politics out of his non-political visit to Israel, as President Reuven Rivlin asked him on Tuesday to act as a go-between with Palestinian Authority President Mahmoud Abbas.

Rivlin asked His Royal Highness to take a message to Abbas. “I know that you’re going to meet President Abbas. I would like you to send him a message of peace,” he said.

Rivlin asked William to tell him: “It is about time that we have to find together the way to build confidence as a first step to bringing an end to the tragedy between us that has gone one for more that 100 years.”

William’s reaction to the request was not mentioned in the statement released on the meeting by the president’s office.

The royal visitor spoke of his visit to Yad Vashem earlier in the day. “I had a very moving tour around Yad Vashem this morning, which really taught me quite a lot more than I thought I knew about the true horrors of what happened to the Jews during the war, and I very much appreciate the time everyone gave to show me around the museum.”

He stressed, “I, like you, look forward to understanding lots about the region and hope that peace in the area can be achieved.”

Rivlin presented William with a gift from the archives of the Yad Ben-Zvi Museum. In the presence of the original, the president presented him with a copy of an album of photographs taken between 1850 and 1865 by Elizabeth Ann Finn, wife of then-British consul in Yerushalayim. During this period, HRH Prince Edward – who went on to become King Edward VII – HRH the Duke of Cambridge’s great-great-great-grandfather visited the Holy Land. The album included pictures of the prince’s visit in 1862, and a moving description of the welcome he received as published in the Magid newspaper in an article written by President Rivlin’s great-grandfather, Yosef Rivlin, one of the leaders of the Jewish community in the Holy Land.