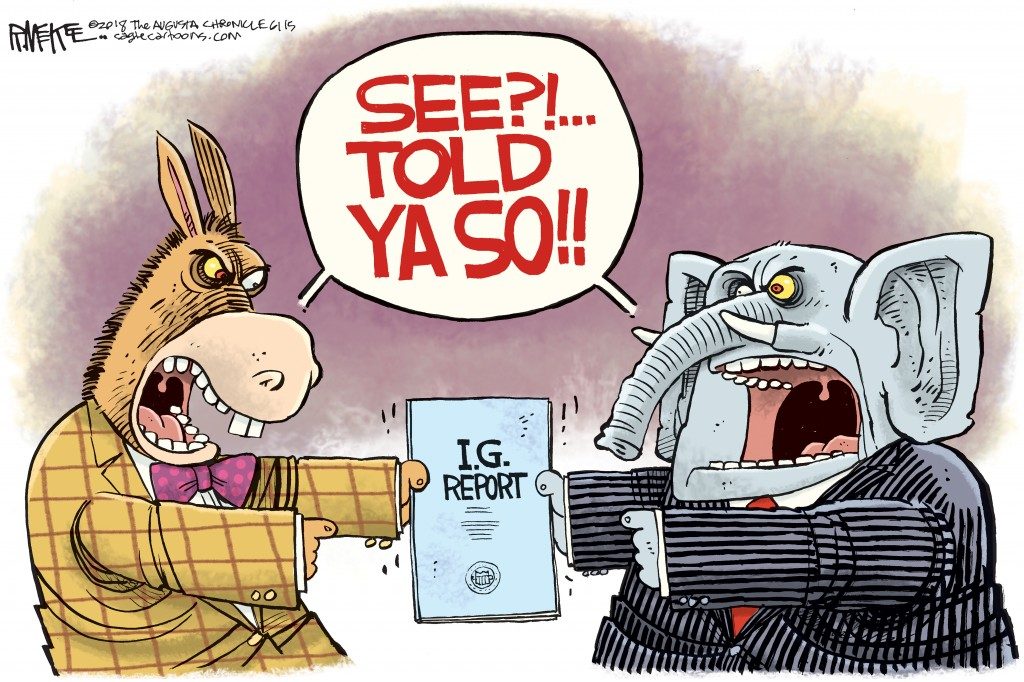 In fact, the overlooked bombshell of the report is the inspector general’s confirmation that classified information contained in Clinton’s emails was in fact compromised by foreign intelligence services, and that Clinton had recklessly emailed President Barack Obama using her unsecured personal email from the territory of a hostile foreign adversary.

Before the report was released, we knew from Comey’s July 2016 statement that Clinton’s private emails included “seven e-mail chains concern matters that were classified at the Top Secret/Special Access Program level when they were sent and received.” We also knew that the FBI “also found information that was properly classified as Secret by the U.S. Intelligence Community at the time it was discussed on e-mail.”

Comey further declared, “We do assess that hostile actors gained access to the private commercial e-mail accounts of people with whom Secretary Clinton was in regular contact from her personal account.” And he speculated that, given how “extremely careless” Clinton had been, it was “possible that hostile actors gained access to Secretary Clinton’s personal e-mail account.”

Well it turns out, the FBI knew with certainty at the time that hostile actors had in fact gained access to classified information via Clinton’s emails. According to the inspector general, a special review of the Clinton email investigation in 2017 by the Office to the FBI’s Inspection Division (INSD) found that “the FBI … successfully determined classified information was improperly stored and transmitted on Clinton’s email server, and classified information was compromised by unauthorized individuals, to include foreign government’s or intelligence services, via cyber intrusion or other means” (emphasis added).

The initial draft of Comey’s 2016 statement said it was “reasonably likely” that hostile actors had gained access to Clinton’s private email account. Moreover, the inspector general quotes FBI agent Peter Strzok as commenting that: “It is more accurate to say we know foreign actors obtained access to some of her emails (including at least one Secret one) via compromises of the private email accounts of some of her staffers” (emphasis added). These facts were inexplicably left out of the final statement.

We still don’t know the full extent of the damage Clinton caused, because the inspector general reports that the FBI intentionally chose not to follow every potential lead of compromised classified information. The report notes that “Strzok further stated that the FBI’s ‘purpose and mission’ was not to pursue ‘spilled [classified] information to the ends of the earth’ and that the task of cleaning up classified spills by State Department employees was referred back to the State Department.”

We also learned new details about Clinton’s recklessness and wilful misconduct in using her private email. The final version of Comey’s statement did note that Clinton “used her personal e-mail extensively while outside the United States, including sending and receiving work-related e-mails in the territory of sophisticated adversaries.” But we did not know at the time that the original draft included one more sentence: “That use included an email exchange with the President while Secretary Clinton was on the territory of such an adversary.” According to the inspector general, “This reference later was changed to ‘another senior government official,’ and ultimately was omitted.”

When I worked in the George W. Bush White House, and traveled to certain foreign countries with the president, we were required by the Secret Service to remove the batteries from our BlackBerrys, place them in a sealed plastic bag, and leave them on Air Force One for the duration of our visit to prevent foreign adversaries from hacking into the White House email system.

But Clinton was so cavalier that she actually used not her government communications device, but her unsecured private email to communicate directly with the president of the United States from the territory of a foreign adversary. By emailing Obama directly from hostile territory, she put both her own email system and the president’s at risk of foreign intrusion.

Many Democrats blame Comey’s July 2016 statement for causing Clinton irreparable harm in the election. But we now know Clinton’s actions were worse than what Comey presented to the American people. Just imagine if his statement had been full and complete.