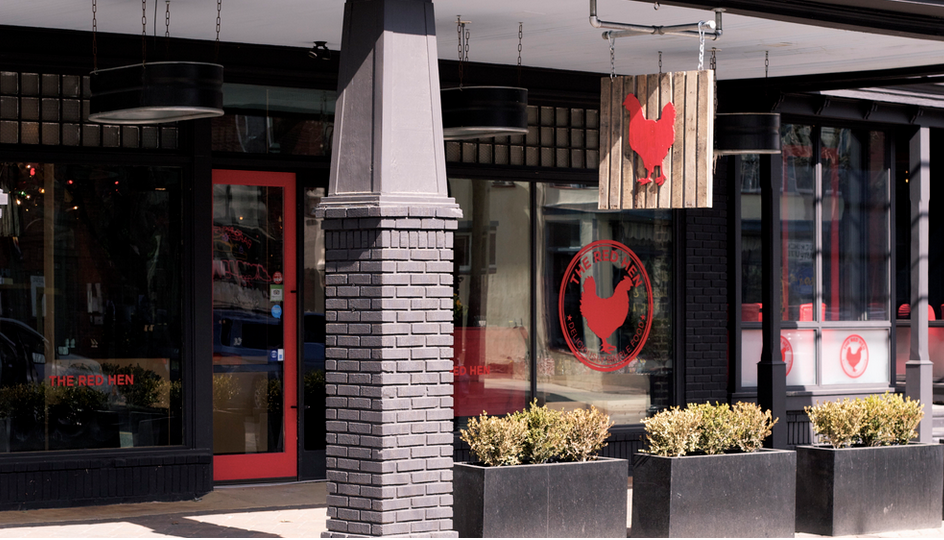 The Red Hen restaurant in Lexington, Virginia, probably wishes White House Press Secretary Sarah Huckabee Sanders hadn’t stopped in for dinner. All the other — unaffiliated — Red Hen restaurants would be good with that, too.

The cheese board had arrived but her entrée had not when Sanders was asked to get up from her table and, kindly, leave.

Sanders tweeted as much over the weekend, saying she was given the boot “because I work for @POTUS,” referring to President Donald Trump. The owner of the restaurant — which is about 190 miles from the White House — told The Post that to uphold her business’s standards of honesty and compassion, Sanders had to go.

But for Twitter users, angry callers and Yelp reviewers, any restaurant bearing the name “Red Hen” with some kind of bird silhouette for a logo was lumped in with the one that showed Sanders the door.

Let’s start a little closer to the White House, with the Red Hen in Washington. It’s a charming little upscale neighborhood restaurant. Same name. Also has a logo of a hen. Did not host the White House press secretary.

It tried to make that clear: On Saturday, that Red Hen tweeted that Sanders “went to the unaffiliated [Red Hen in Lexington] last night, not to our DC-based restaurant.”

That tweet received 4,400 replies from nonbelievers and supporters alike. To talk the naysayers down, the Red Hen responded to Twitter threads with the definition of “unaffiliated,” sarcastic gifs and a reminder that businesses in the District of Columbia are prohibited from discriminating against people based on political views because they are in a federal district.

Then, Yelp. One user asked whether the Red Hen in Washington sells wine by the glass. Another wanted to know: “Is this restaurant related to the one in Lexington that denied service to Sarah Sanders? If so will stop by.”

One reviewer wrote, “Hey, torch bearing internet mob, THIS IS NOT THAT RED HEN. Y’all out of towners need a lesson in basic geography.”

Another took a more diplomatic approach: “Why not stop by anyway and show your support for this establishment that is being mistaken for the one in VA.”

Alas, its owners might have welcomed the support. Instead the place was not only pulled into a social media storm but also — in a not so subtle protest — egged.

According to NJ.com, angry phone calls and social-media posts poured in on Saturday morning as the staff was getting ready for a private event. In a social media post that day, the Red Hen in Swedesboro wrote that it is an independent, family-owned business that happens to share the same name as the one in Virginia.

“Kindly check your facts before you erroneously defame an innocent business …” the post reads.

Elizabeth Pope, the restaurant’s operating manager, told NJ.com that the restaurant’s rating dropped from “4.8 stars to three-point-something.” Some callers lobbied violent threats, including, “I hope someone burns it down.” The restaurant received more than 100 calls over six hours on Saturday afternoon.

Next up: the Red Hen restaurant in Old Saybrook, Connecticut. Like Virginia, Connecticut was one of the original 13 colonies. But it is different from Virginia.

Now, before visitors can access that Red Hen’s website, a message pops up saying the eatery has “absolutely no affiliation with any other Red Hen restaurant anywhere else.”

Shelley Deproto, the owner of the Old Saybrook restaurant, told TheDay.com that 50 phone messages came in by noon on Saturday, including this ominous warning: “We’re going to get you.” Calls streamed in from across the country on Saturday once every minute, and continued into Sunday.

The restaurant’s Yelp rating dropped from a 4.5 (of 5) before Friday night to a 2, Deproto told The Day. Some people placed fake take-out orders and said the restaurant cooked old meat.

“This is our livelihood,” Deproto told The Day. “People here depend on this restaurant.”

He did not specify which Red Hen.