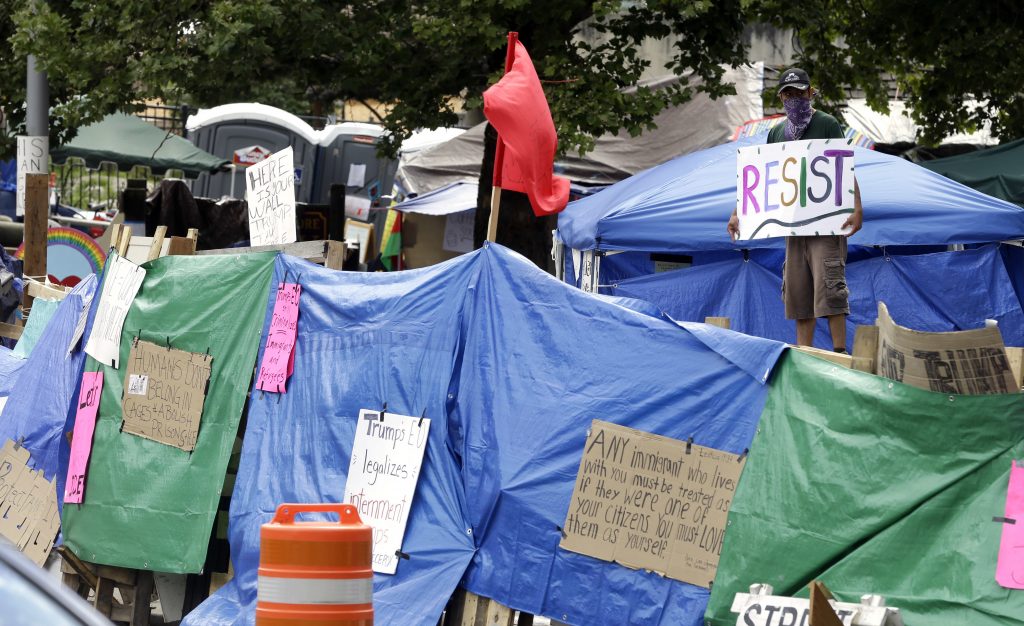 It started as a candlelight vigil for immigrant children who had been separated from their parents while crossing into the United States. A few dozen demonstrators gathered in front of the nondescript Immigration and Customs Enforcement facility in southwest Portland on June 17.

But after the candles were blown out, some of the demonstrators decided to stay, stumbling onto a more effective form of protest with a simple line of reasoning:

A week later, the number of people outside the facility has ballooned, blockading the government building around the clock with their bodies, hastily scrawled poster board signs and a tandem bicycle. By Monday morning, a Federal Protective Services spokesman told The Washington Post, the only people inside the facility were government officials making sure the doors were securely locked.

Occupy Ice PDX was born. And buoyed by their success, organizers spread the word to like-minded people in other immigration hubs.

“We invite the rest of the country to join this movement, to gather and occupy your local ICE facility until it’s shut down,” one message said. “Bring candles, signs, noisemakers and tents. Most importantly, bring yourself. Even if you can only come down for a day, for an hour, your presence is important and needed. It takes ALL of us working together to stop this machine of terror.”

Demonstrators in other cities mobilized to duplicate the protest method.

Organizers in Los Angeles encouraged people to come to the ICE facility on Alameda Street – and stay.

“Spent the night. Not going anywhere. See you in the streets,” one organizer’s tweet said.

And in New York, the ICE processing center on Varick Street canceled all hearings on Monday. Protesters blocked the loading dock that ICE uses to transport immigrants into and out of the building, according to The Hill.

Sam Natale, 29, a protester and an attorney who lives in Manhattan, told the New York Daily News: “Part of the reason why we’re out here is to emphasize that the end of child separation is not the end of the problem.”

In Portland, demonstrators were entrenched at the start of their second week of protests. They had removed the American flag from the front of the building. In its place, they had put up a brown and yellow flag that says “Refugees Welcome.”

A planned rally at the center had grown so large it had to be moved to City Hall.

The demonstrators held signs that said “Kick out ICE” and “Will trade racists for refugees,” according to Oregon Public Broadcasting.

Rep. Steve King (R-Iowa), a staunch immigration opponent, compared the occupation to the attack on Harpers Ferry, the unsuccessful but significant pre-Civil War attack on a U.S. military arsenal that aggravated tensions between the North and the South.

The protests come as the Trump administration is facing fallout from its policy of detaining immigrants at the border and separating children from their parents.

As The Washington Post has reported, more than 2,500 migrant children have been taken from their parents since the practice went into effect last month.

Still, it’s unclear how long the blockades will remain.

On Monday, around 10:30 a.m., officers from the Federal Protective Service, which secures U.S. government buildings, went from tent to tent distributing notices for protesters to vacate federal property.

“While demonstrators have a lawful right to assemble and voice their concerns, blocking the building’s driveways or entrances is not permitted under federal law,” Billy J. Williams, U.S. Attorney for the District of Oregon, said in a news release.

The fliers, which were also posted on the building, warned that “individuals who continue to obstruct the entrance of this federal facility will be subject to arrest and prosecution in federal court.”