National Trump: Illegal Immigrants Who ‘Invade’ U.S. Should Be Deported With ‘No Judges or Court Cases’
National 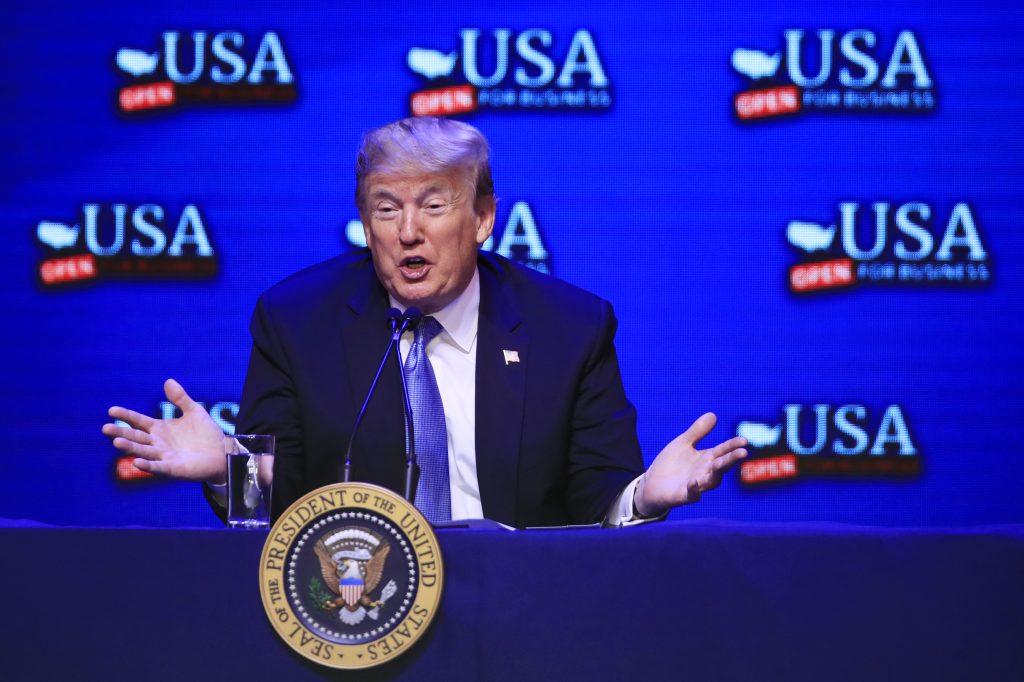 President Donald Trump said on Sunday that people who enter the United States illegally should be sent back immediately to where they came from without any judicial process, likening them to invaders who are trying to “break into” the country.

His proposal drew immediate criticism from legal analysts and immigrant rights advocates who said it would violate the U.S. Constitution’s due process provision, which applies to citizens and non-citizens alike.

In a series of tweets on Sunday, Trump said: “We cannot allow all of these people to invade our Country. When somebody comes in, we must immediately, with no Judges or Court Cases, bring them back from where they came.”

“Cannot accept all of the people trying to break into our Country. Strong Borders, No Crime!”

It was unclear if Trump was advocating an expansion of the provision that allows expedited removals of illegal immigrants at or near the U.S. border, a policy his administration has embraced since he took office. Nor did Trump differentiate between illegal immigrants and people who entered the United States to seek asylum protection.

The White House did not return a call seeking clarification.

“The president of the United States has just forcefully proposed the end of political asylum and no due process for migrants,” Sherrilyn Ifill, president of the NAACP Legal Defense Fund, wrote on Twitter.

Lee Gelernt, the deputy director of the ACLU’s Immigrants’ Rights Project, told Reuters: “The administration cannot simply get rid of all process for immigrants. The due process clause absolutely applies. It’s not a choice.”

Authorities can bypass due process protections with the expedited removals policy that allows quick deportations if an immigrant is apprehended within 100 miles (160 km) of the border and has been in the country less than 14 days. Those seeking asylum must be granted a hearing.

Trump’s tweets on Sunday came after a week of global outcry over images and video of crying children and their distraught parents separated at the U.S.-Mexico border. Critics in Trump’s Republican Party, as well as his wife and daughter, urged him to abandon the policy.

The president buckled to the pressure on Wednesday, issuing an executive order that ended the separations. But the government has yet to reunite more than 2,000 children with their parents.

But Trump’s frustration over the issue only grew. He has issued a drumbeat of criticism of the immigration system and Democrats in Congress, while using increasingly harsh terms such as “invasion” and “infestation” to describe illegal immigration.

“Here, I think he is making it clear, he just doesn’t want anybody here. He wants people to just be sent back, no matter what,” said Jorge Baron, executive director for the Northwest Immigrant Rights Project, who compared Sunday’s tweets with comments Trump was reported to have made in January about immigrants.

While some who advocate for stricter immigration rules have argued that people are making fraudulent asylum claims or abusing the loopholes in U.S. immigration laws, Baron said Trump’s views went way beyond those arguments.

Trump’s “zero tolerance” policy of prosecuting adults for entering the country illegally entails a process that typically takes many months, that required children to be separated from parents because they are not legally allowed to be kept in detention for more than 20 days.

Keeping the children with their migrant parents as they await court proceedings faces obstacles, however, including the lack of sufficient housing, a paucity of immigration judges and a daunting backlog of cases.

Under expedited removal proceedings, which are used most commonly at ports of entry, an immigration official can evaluate an immigrant’s claim and reject it with no involvement by an immigration judge or review board.

The Trump administration called last year for the expansion of the expedited removals program to immigrants who have been in the country illegally for up to two years.

There is an exception from expedited removal for those with a credible fear of returning home.

Lindsay Harris, an assistant professor of law at the University of the District of Columbia, said those with no credible fear could still see a judge, while those with such a fear could begin a long legal process that eventually could result in asylum and applying for a work permit.

“It’s already an extremely truncated process,” the ACLU’s Gelernt said. “The president’s suggestion that there is a ton of process for these individuals is simply wrong. There are already people being removed with a truncated process.”