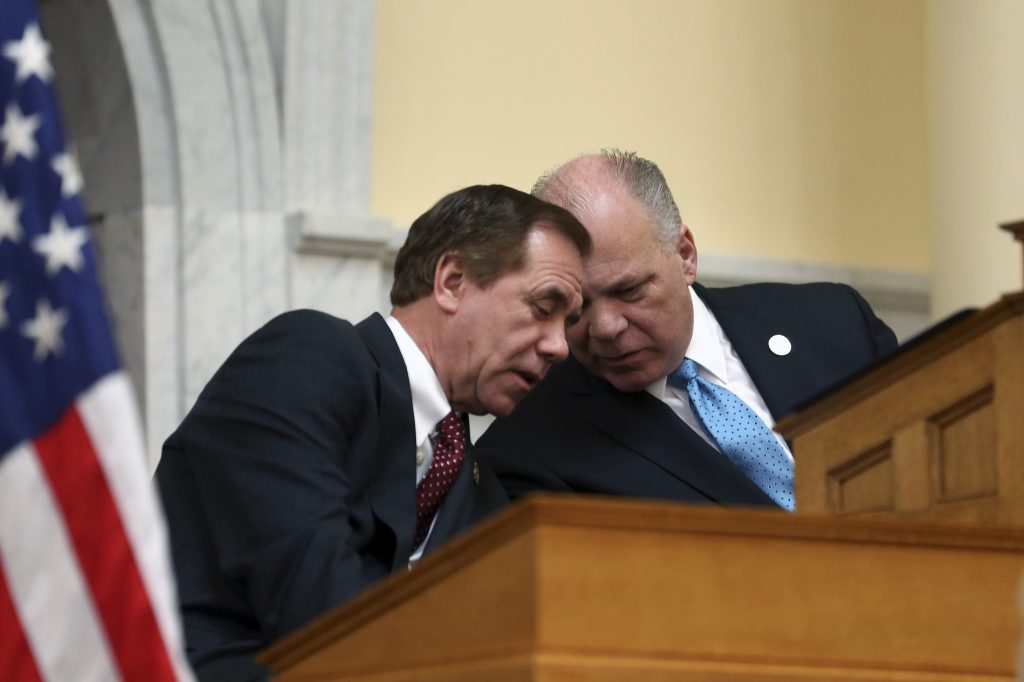 An all-Democrat skirmish over which taxes to raise has New Jersey flirting with a government shutdown.

Gov. Phil Murphy, Senate President Steve Sweeney and Assembly Speaker Craig Coughlin have so far failed to find agreement on how to fund state government ahead of the June 30 deadline.

Sweeney and Coughlin sent Murphy a $36.5 billion spending plan that he has threatened to veto over how the measure proposes financing government.

A state government shutdown would occur if Murphy and lawmakers fail to agree to a balanced budget before the deadline.

A closer look at the budget fight:

A major part of the fight centers on how to pay for roughly $37 billion budget, which under Murphy’s proposal would be about 5 percent bigger than the final budget under Republican Chris Christie.

Murphy says he wants to finance expanded pre-K, a bigger pension payment, and aid to schools by boosting several tax rates; the income tax on people earning $1 million and above would go from 8.97 percent to 10.75 percent under Murphy’s plan. He also wants to raise the sales tax, which Christie and lawmakers cut by a fraction when they raised the gas tax by about 25 cents in 2016. Under Murphy’s proposal, the rate would go from 6.625 percent to 7 percent, where it was before the 2016 deal.

Lawmakers say the public, especially poor people who pay the sales tax, can’t afford the increase, and instead they passed a budget that would raise business taxes. The plan calls for raising the rate from 9 percent to 11.5 percent on businesses that make between $1 million and $25 million. On businesses that make over $25 million, the rate would climb to 13 percent from 9 percent. That would make New Jersey’s the highest business tax in the country, over Iowa’s at 12 percent, though the provision would phase out in two years.

Murphy has all but rejected the tax hike over concerns about diminishing New Jersey’s competitiveness, and worries that a two-year tax increase will leave the state without needed revenues. He’s right that given the trend of required spending in the coming years that New Jersey would struggle to meet its bills, but lawmakers say two years will give them time to properly address the state’s fiscal mess.

Another big issue is school funding. Murphy and lawmakers agree about raising state aid for schools, which was underfunded by Christie, according to a Supreme Court-approved aid formula. Murphy initially called for about $284 million more dollars in K-12 spending. That’s a 3.5 percent increase over Christie’s last budget.

But he agreed with lawmakers’ plans to boost aid by $65 million. He also agrees with reconfiguring the formula to let schools that gained enrollment get more money, and reduce aid over seven years to districts that lost students but continue to get higher state help.

That deal, though, is contingent on tax revenue, Murphy said, and there’s no deal there.

There’s a lot of overlap between Murphy’s plan and the Democratic legislative leaders’ proposal. Both plans make a record $3.2 billion pension payment, up from $2.5 billion under Christie’s last budget.

But there are some other differences.

But they added about $150 million for a property tax rebate program and added back in funding for programs like financing, including for re-entry programs, and court-appointed advocates for children that Murphy had cut out of the budget he inherited from Christie.