World Jews, Muslims in Berlin Team Up on Bike Rides Against Hatred
World 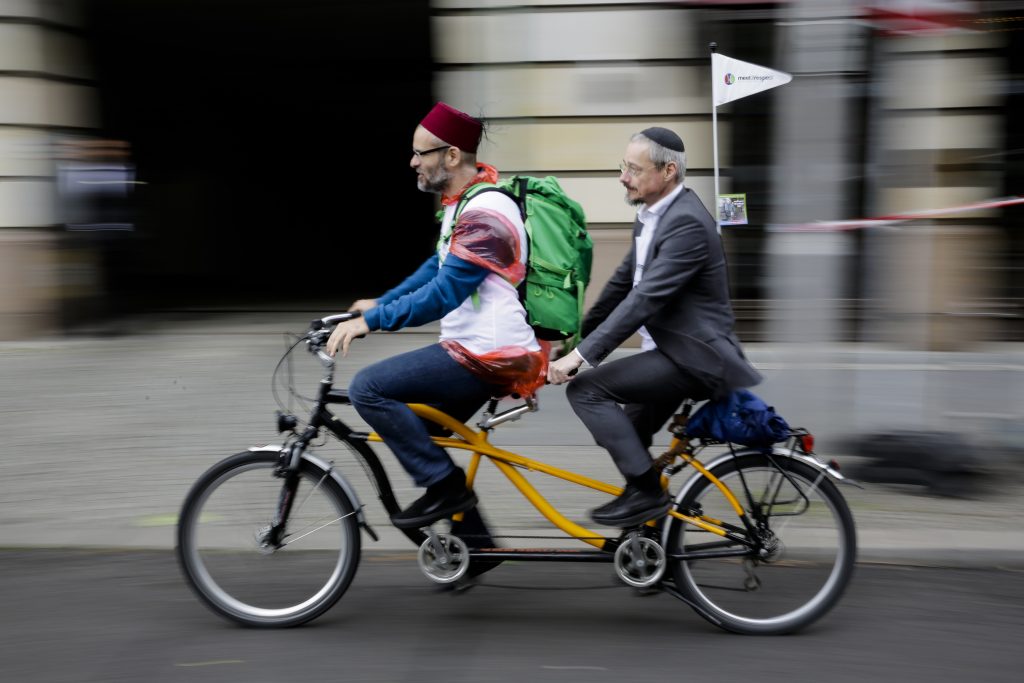 Some 25 Jews and Muslims rode tandem bicycles through the German capital on Sunday in a protest against growing anti-Semitism and attacks on Muslims in the country.

Some were rabbis and imams, others included women in headscarves and Jewish community members donning skullcaps from Berlin and beyond who shared the bikes on a tour through the city.

Rabbi Elias Dray, one of the organizers of the ride that started at Berlin’s Holocaust memorial, said the interfaith tour was intended to boost contacts between Jews and Muslims and other Germans.

“There’s often prejudice in places where there’s little contact,” said Dray, who works as a community rabbi in the Bavarian town of Amberg. “Anywhere it’s a big gain to get to know Judaism and Islam.”

He rode a tandem together with Berlin Imam Ender Cetin. They and others wore white vests with the words: “Jews and Muslims for respect and tolerance.”

In addition to the 25 interfaith-bikers, dozens of people joined the bicycle tour through Berlin’s downtown in a show of solidarity.

Anti-Semitism has been on the rise in Germany lately and attacks on Muslims have increased.

The rising tensions come as Germany grapples with an influx of more than 1 million mostly Muslim immigrants, along with the rise of a nationalist party, the Alternative for Germany, which was elected to Parliament last year for the first time. Its leaders are known for their openly anti-Muslim stance, while anti-Semitism has also featured in their statements, but less often.

To further complicate things, some of the newly arrived Muslim immigrants have added a new strain of anti-Semitism by holding Jews responsible for the Israeli-Palestinian conflict.

Reports of bullying of Jewish children by Muslim immigrant kids in schools across the country have scared many Jews, while Muslim women among others often report slurs and discrimination against them for wearing headscarves.

Despite these tensions, Imam Cetin said, “the majority of Muslims and Jews want to live peacefully together.”

“It must become a natural thing that we live together in this city and, that we can be able to express our religion openly,” Cetin added.