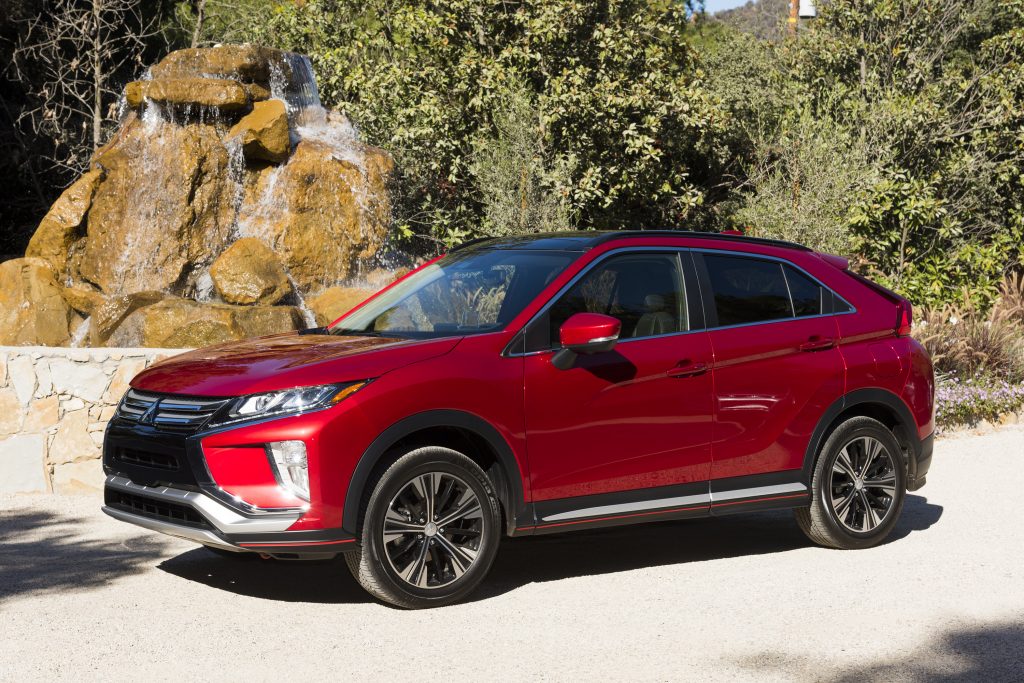 Back when I was learning how to drive in the 1990s, Mitsubishi sold sports coupes in the United States. My dad bought into the fastest growing car company of the 90s with a 195-horsepower Mitsubishi Eclipse with a five-speed manual. It might have been an Eagle Talon. Same difference.

When the all-new 2018 Mitsubishi Eclipse Cross showed up in my driveway, there was what shrinks call cognitive dissonance. Memories of a manual sports coupe clashed with a crossover with more safety aids than a preschool. A sign of the times, to be sure.

Aside from the budget-or-bust Mirage, Mitsubishi only sells crossovers in the U.S. now. The strategy has resulted in year-over-year sales growth since 2012. Other automakers are ditching cars for crossovers too. It’s hard to say the comparatively tiny Japanese brand is influencing the market, but the diamond star is currently the only automaker offering a vehicle at the convergence of two unstoppable trends in the plug-in hybrid midsize SUV Mitsubishi Outlander PHEV.

The Eclipse Cross is the most important vehicle for the brand’s survival and growth in the U.S. It is a compact crossover competing with the Nissan Rogue, Toyota RAV4, Honda CR-V and so many others in America’s best-selling segment.

The Eclipse Cross is not sporty like its namesake, but is very well-appointed at a very good price. The tester came with all-wheel drive, power folding side mirrors, adaptive cruise control, Apple CarPlay and all the latest modern touches, for just over $31,000 in top SEL trim. That’s at least a few thousand less than the competition. Undercutting the competition is a strategy that has worked well with the Outlander, too.

It has the edgy angularity of the latest crop of Japanese crossovers, with a sloping rear and rising beltline that gives it a pinched end. There’s an integrated roof spoiler, but then things get odd; to improve rear visibility, or to stand out in a cookie-cutter class, there is another spoilerlike bar that splits the rear windshield, not unlike the Toyota Prius. That bar houses the LED taillights and the third safety light. It’s different. It made many people ask about the brand and model, with mixed remarks on the overall design.

The parade of new crossovers and utility vehicles marched on throughout auto show season, with dozens or new and redesigned crossovers set to hit dealer lots in mid- to late-2018 for model year 2019. The differences are in the details.

From the inside, the split rear glass is annoying in the rear view mirror. Because the rear roofline is so tapered, I’m not sure how else Mitsubishi could have increased visibility. It’s cramped to look out, but not cramped to sit in for rear seat passengers or for cargo. This class is all about compromise.

The soft touch black surfaces contrast nicely with the chromelike trim pieces for an upscale feel. The center console houses a touch pad to control the 7-inch display screen. Touch pads have proven sensitive to use while driving, but the larger display on Apple CarPlay and Android Auto simplify the process. The steering wheel controls are basic, which is good, but then there’s another button behind the steering wheel to scroll through the vehicle info display, which is mildly inconvenient.

The 152-horsepower turbocharged four-cylinder engine is new. It’s not powerful but it delivers enough burst to make passing moves with confidence. Power is transmitted to all wheels via a continuously variable transmission that has paddle shifters, which was another source of dissonance for my shrink. You can make it feel like you’re shifting gears, but the system will override you pretty regularly.

The ride is on the louder side on the highway, no doubt due in part to the doors and the panoramic sunroof (part of the $2,500 touring package with advanced driver assistance systems such as forward collision and lane departure warnings).

Minor complaints aside, the Eclipse Cross is crucial for the brand and a good option for value-oriented consumers. The powertrain and ride quality is not as refined as the Honda CR-V, but it would be hard to notice if you haven’t had a new car in some time. The price and the timing are right.