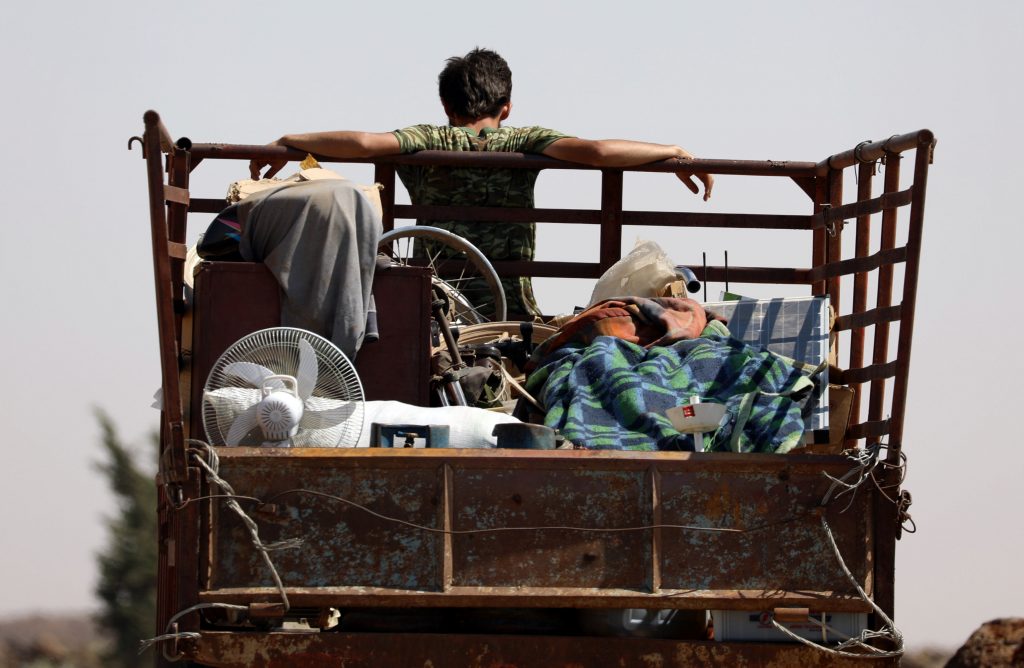 Syrian government helicopters dropped barrel bombs on opposition areas of the country’s southwest on Friday for the first time in a year, a war monitor and rebel officials said, in defiance of U.S. demands that President Bashar al-Assad halt the assault.

Assad has sworn to recapture the area bordering Jordan and the Israeli Golan Heights and the army this week began ramping up an assault there, threatening a “de-escalation” zone agreed upon by the United States and Russia last year.

The United States on Thursday reiterated its demand that the zone be respected, warning Assad and his Russian allies of “serious repercussions” of violations. It accused Damascus of initiating airstrikes, artillery and rocket attacks.

United Nations Secretary-General Antonio Guterres on Friday demanded an immediate end to military escalation in southwestern Syria, saying he was “concerned at the significant risks these offensives pose to regional security,” a spokesman for the U.N. chief said.

U.S. Ambassador to the United Nations Nikki Haley said earlier on Friday that the Syrian military escalation “unambiguously violates” the de-escalation arrangement and that over 11,000 people had already been displaced.

“Russia will ultimately bear responsibility for any further escalations in ‎Syria,” Haley said in a statement.

A major offensive would risk a wider escalation that could draw the United States deeper into the war. The southwest is of strategic concern to U.S.-allied Israel, which has this year stepped up attacks on Iran-backed militia allied to Assad.

The barrel bombs targeted a cluster of rebel-held towns including Busra al-Harir northeast of Deraa city, where the government attack threatens to bisect a finger of rebel ground jutting northwards into land held by the government.

The Syrian Observatory for Human Rights, a Britain-based war monitor, said Syrian government helicopters had dropped more than 12 barrel bombs on the area, causing damage, but no reported deaths.

Abu Bakr al-Hassan, spokesman for the rebel group Jaish al-Thawra, which fights under the banner of the Free Syrian Army (FSA), said the munitions had been dropped on three towns and villages and that warplanes had hit another.

“I believe [the bombardment] is testing two things: the steadfastness of the FSA fighters and the degree of U.S. commitment to the de-escalation agreement in the south,” he told Reuters.

Syrian state media said on Friday that army units had targeted “lairs and movements of terrorists” in the area.

The Syrian government has denied using so-called barrel bombs – containers filled with explosive material that are dropped from helicopters and which cannot be accurately aimed. However, United Nations investigators have extensively documented its use of them during the conflict.

While government forces have made heavy use of artillery and rockets in the assault, they have yet to draw on the kind of air power that was critical to the recovery of other rebel-held areas. Russian warplanes have yet to take part, rebels say.

Still, Russia’s Ambassador to Lebanon Alexander Zasypkin was quoted as saying that Russia was helping Damascus to recover the south.

“The Syrian army now, with support from Russian forces, is recovering its land in the south and restoring the authority of the Syrian state,” Zasypkin told the pro-Hezbollah newspaper al-Akhbar.

“Israel has no justification to carry out any action that obstructs the fight against terrorism,” he added.

A Syrian rebel commander in the south accused Iran of trying to torpedo the de-escalation agreement and vowed fierce resistance. “We possess many weapons,” said Colonel Nassim Abu Arra, commander of the Youth of Sunna Forces group.

Rebels in the southwest have received support, including arms from Assad’s foreign foes, during the seven-year-long war.

Analysts of the conflict believe this support continued even after U.S. President Donald Trump decided last year to shut down a military aid program run by the Central Intelligence Agency, though it may have been scaled back.

Assad has this year recaptured the last remaining enclaves of insurgent territory near the capital Damascus and the city of Homs, including the densely populated eastern Ghouta region.

But there are still large areas outside his control. Apart from the southwest, the rebels hold a swathe of northwest Syria. Terror groups backed by Turkey also hold parts of the northern border area.

And the quarter of Syria east of the Euphrates is controlled by an alliance of Kurdish and Arab militias supported by the United States. The United States also has a base at Tanf, near Syria’s borders with Iraq and Jordan, which controls the Damascus-Baghdad highway.

On Thursday a commander in the regional alliance backing Assad said a U.S. strike had killed a Syrian army officer near Tanf. The Pentagon, however, said a U.S.-backed Syrian rebel group had engaged “an unidentified hostile force” near Tanf, without casualties on either side.