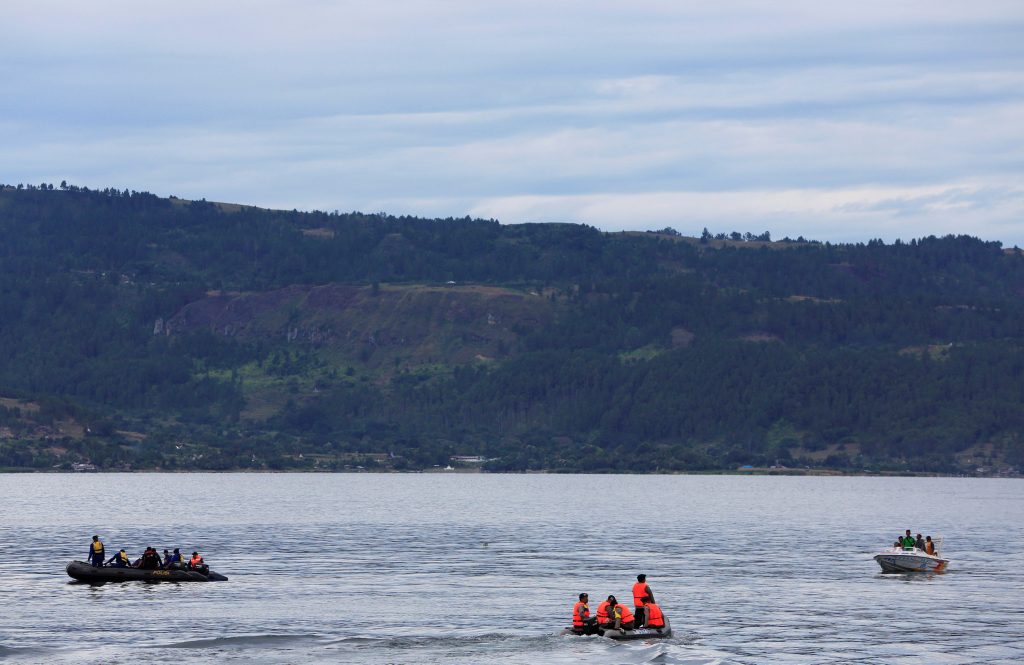 Divers and an underwater drone on Wednesday joined a fleet of rescue vessels in Indonesia’s search for at least 192 passengers missing two days after an overcrowded wooden ferry sank in one of the world’s deepest volcanic lakes in Sumatra.

Authorities are unable to confirm how many were aboard when the vessel sank on Monday in bad weather, since it did not have a manifest. Four were confirmed dead and 18 survivors picked up, but officials fear the death toll could be much higher.

Tearful relatives waiting for news gathered at the small port of Tigaras on Lake Toba. Search teams expect to find many more trapped victims once they know where the vessel came to rest in the lake, which is 1,500 feet deep.

“We have the coordinates from when it sank, but we need to verify them,” said Budiawan, a search and rescue official.

A team of 25 divers, including marines, was searching for the vessel, along with a remotely operated underwater vehicle (ROV) that can operate up to a depth of 1,247 ft, he added.

The first team of divers encountered poor visibility and freezing cold when it got to a depth of 164 ft, said Muhammad Syaugi, head of the national search and rescue agency.

Dozens of angry relatives demanded answers from authorities as the search was called off for the night.

Transport minister Budi Karya said on Wednesday the boat was designed for 43 passengers and had 45 life jackets on board.

The estimate of those missing shows the ferry was overloaded nearly five times above capacity. It was also carrying dozens of motorcycles, say officials and survivors.

It was also missing a sailing permit, and the life jackets on board were not up to standard, Karya said.

“There were mistakes. The journey was illegal,” Karya told a news conference in Jakarta, the Indonesian capital.

One survivor described panic among the passengers when high waves lashed the ferry and they started falling into the water as it keeled over.

“We were floating around for an hour in the middle of the lake before help arrived,” said Riko Sahputra, who clutched a motorcycle helmet to stay afloat before a passing boat rescued him, news website Kompas said.

Weather conditions can quickly change on the picturesque lake, where a string of accidents has included a 1997 sinking that killed about 80 people.

Ships in Indonesia often carry far more passengers and goods than they are designed for, flouting safety rules.