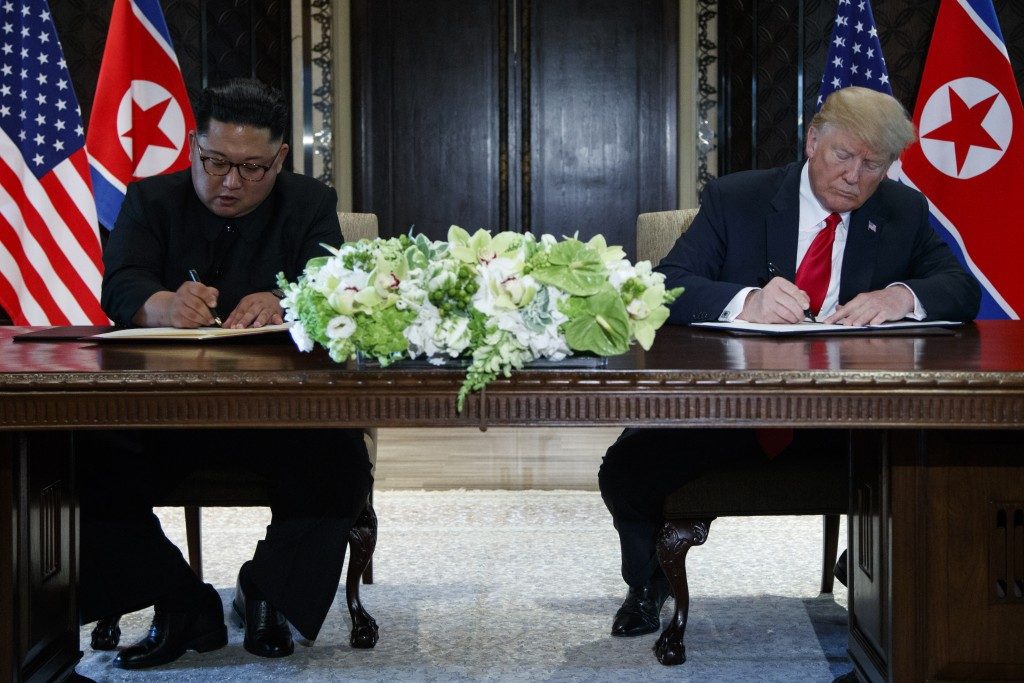 Well, that didn’t take long. President Trump had barely departed Singapore when Democrats in Washington unleashed scathing attacks over his meeting with North Korean dictator Kim Jong Un. “What the United States has gained is vague and unverifiable at best. What North Korea has gained, however, is tangible and lasting,” Senate Minority Leader Charles E. Schumer (D-N.Y.) fumed. “In his haste to reach an agreement, President Trump elevated North Korea to the level of the United States while preserving the regime’s status quo,” House Minority Leader Nancy Pelosi (D-Calif.) protested.

Please. Where were these complaints when President Barack Obama was enjoying peanuts and Cracker Jacks with Raul Castro at a Havana ballpark? And a few months ago, Schumer was decrying Mr. Trump’s “reckless” military threats and Pelosi was complaining about his “saber-rattling.” Now, suddenly, Trump’s gone from warmonger to a remake of Neville Chamberlain?

The criticism is premature and overwrought. Mr. Trump made no real concessions in Singapore. He did not lift sanctions, unfreeze North Korean assets or send secret planes loaded with hard currency to Pyongyang. He did not sign an agreement ending the Korean War or offer Pyongyang diplomatic recognition. All the president did was, as a goodwill gesture, suspend military exercises with South Korea — a decision he can easily reverse. And the fact that the statement the two leaders signed referred only to “complete denuclearization,” not “complete, verifiable and irreversible denuclearization,” does not mean that Mr. Trump gave up verification or irreversibility in the deal, because there is no “deal” yet, only a “communique” that summarized what the two leaders discussed. We are at the start of the negotiating process, not the end.

Mr. Trump’s critics need to back off. He inherited this mess. Every other approach by his predecessors to stopping Pyongyang’s nuclear drive has failed. So, the president and his team are trying something new; they deserve some latitude to see if this new approach can succeed.

Will it work? Maybe not. The North Koreans are skilled liars. It will be incredibly difficult to reach a good deal that ensures the complete, verifiable, irreversible denuclearization of North Korea.

But there is reason [to] hope Mr. Trump will not sign a bad deal. That’s because the president set a very high bar for himself when he withdrew from Obama’s nuclear deal with Iran. Any agreement with North Korea that he and Secretary of State Mike Pompeo reach can’t replicate the flaws they identified in the Iran deal.

What were those flaws? The administration has identified five principal defects:

A nuclear deal with North Korea must not replicate these five flaws. According to Pompeo, it will not. “There will be in-depth verification” of the North’s compliance, the secretary said this week. The United States, he said, has assembled a team of more than 100 experts who will be charged with the task of “dismantling North Korea’s weapons programs.” Any agreement, Pompeo also said, will cover North Korea’s “[chemical and biological weapons] program and missiles that threaten the world.” And he assured that “until such time as we get the outcome that we’re demanding, economic relief is not going to be provided.” Finally, Pompeo declared, “in contrast to the previous administration, we want to include Congress as a partner in this process. We want our efforts to have broad support with the American people and endure beyond the Trump Administration. A treaty would be our preferred way to go.”

That is an incredibly high standard that will be very tough to meet. “This administration will not repeat the mistakes of the past,” Pompeo promised, adding that “a bad deal is not an option.” We know what a bad deal looks like. We should all be pulling for Mr. Trump and Pompeo to negotiate a good one.n The Washington Post