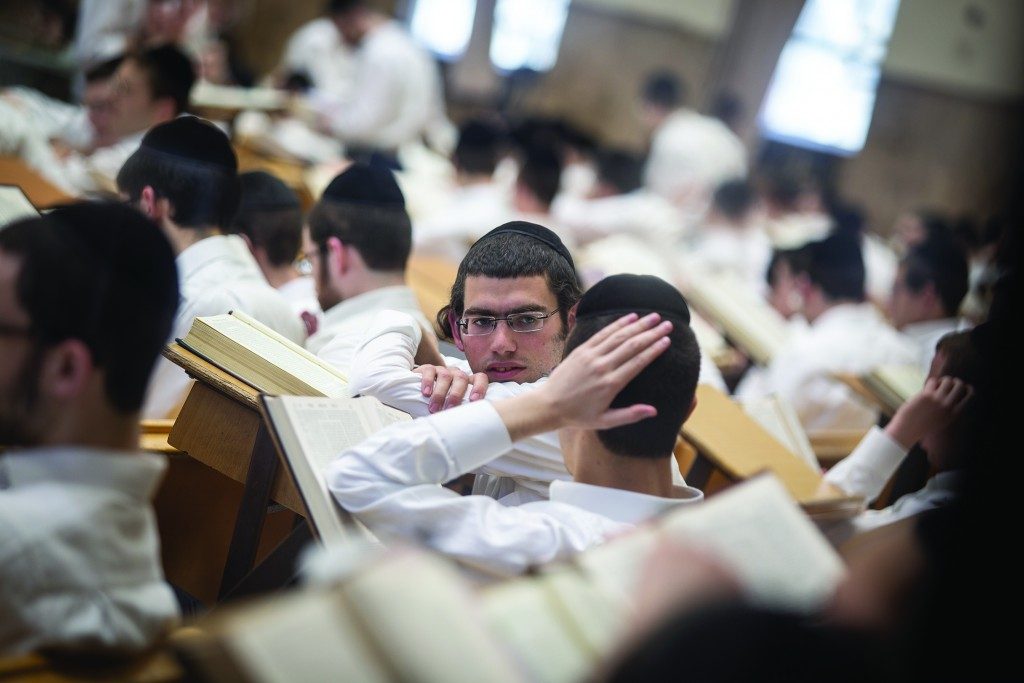 The chareidi public in Israel cannot survive without the means to educate its sons and daughters in the Torah path — which has been paved for us throughout the generations.

One of the principles that enabled our existence in Israel to date is the arrangement of an exemption from army service for those who have made Toraso umanuso — fully-committed, full-time yeshivah students. This arrangement has been in effect for 70 years, enabling every youth and married man whose soul longs for Torah to learn with no interference.

The memorandum and its accompanying proposed law that were presented this week by the committee appointed by the defense minister attempt to change this 70-year-old arrangement. The new bill seeks to limit the number of Torah students, under the guise of “quotas” and “targets.” It dares to punish Torah institutions in their pockets whenever these “quotas” and “targets” are not met. And it also warns that the blaze of the sword will continue to flash over the heads of our Yeshivos, in the form of a threat that if the “quotas” and “targets” are not met, the law will be voided and the general draft will be instituted instead.

These are inconceivable, unacceptable ideas. In the previous Knesset, a harsh law was legislated, restricting the freedom of Torah students. When coalition talks began for the current government, United Torah Judaism and Shas insisted that this law be revoked.

An outline for a new law was formulated, one that was no great relief for the chareidi public. Far from what we wanted, it merely reduced the chillul Hashem embodied in the previous law. This new law passed, but once again, the High Court fumed and foamed, sending all parties into a tizzy by demanding changes in the agreed-upon and duly-legislated bill.

And so, once again, we find ourselves on a precipice, nearing the deadline set by the High Court and the current government, which obligated itself to right the wrongs of the previous governments. Predictably, the Moetzes Gedolei HaTorah of Agudas Yisrael instructed its representatives this week to oppose the new bill, and said that if it passes without chareidi support, the chareidi parties must quit the coalition. For Jews who fear and tremble before the word of Hashem cannot lend their hand to a coalition and government that strikes at our most fundamental principles.

The Likud, as the leader of this coalition, and the other coalition partners recognize the sensitivity of the matter. They understand our fears, and they promised to allay them — and the time has now come to fulfill their word.

It is important that we recognize that despite the insistence of the High Court and the rumbles by Yesh Atid and its allies, the main issue is not the chareidim joining the military. In reality, as has been previously noted in these pages, the military is neither prepared for a mass enlistment of chareidim nor willing to undertake the necessary steps to make it possible for chareidim to enter the army. Nor does the political leadership want it. Cognizant of the fact that a successful military career is all-too-often a stepping stone to electoral victories, the secular leadership is wary of the idea of chareidi soldiers climbing the ranks of the IDF. Even the religious Zionists — who have been an integral part of the army throughout the decades — have discovered their careers stymied by a glass wall and an inherent bias, and how much more so for chareidim.

Rather, at the heart of the issue is the fate of chareidim in the Israeli workforce.

For many years, the secular leadership saw the fact that chareidim didn’t serve in the army — and their resulting disadvantage when seeking to enter the workforce — as an ideal situation, despite their claims to the contrary. This situation allowed them to paint this segment of society as pariahs, limiting their influence and turning them into a convenient scapegoat.

With the passage of time, this approach is no longer tenable, and that has put the secular leadership in a quandary. The chareidi community has, baruch Hashem, grown exponentially over the decades, and it can no longer be ignored. While the leadership remains apprehensive of chareidim in positions of influence and authority, Israeli society is in need of chareidim, who have proven to be intelligent and qualified workers.

What must be perfectly clear under all circumstances is that no matter how heavy the price, the Torah scholars will not abandon the traditions of their fathers and will never, Heaven forbid, leave the tents of Torah.

Ultimately, much will depend on the ability of the chareidi public to be able to withstand the pressure of those politicians seeking to cater to the virulent anti-chareidi hatred within their voter bases.

For this we need much tefillah and siyatta diShmaya.