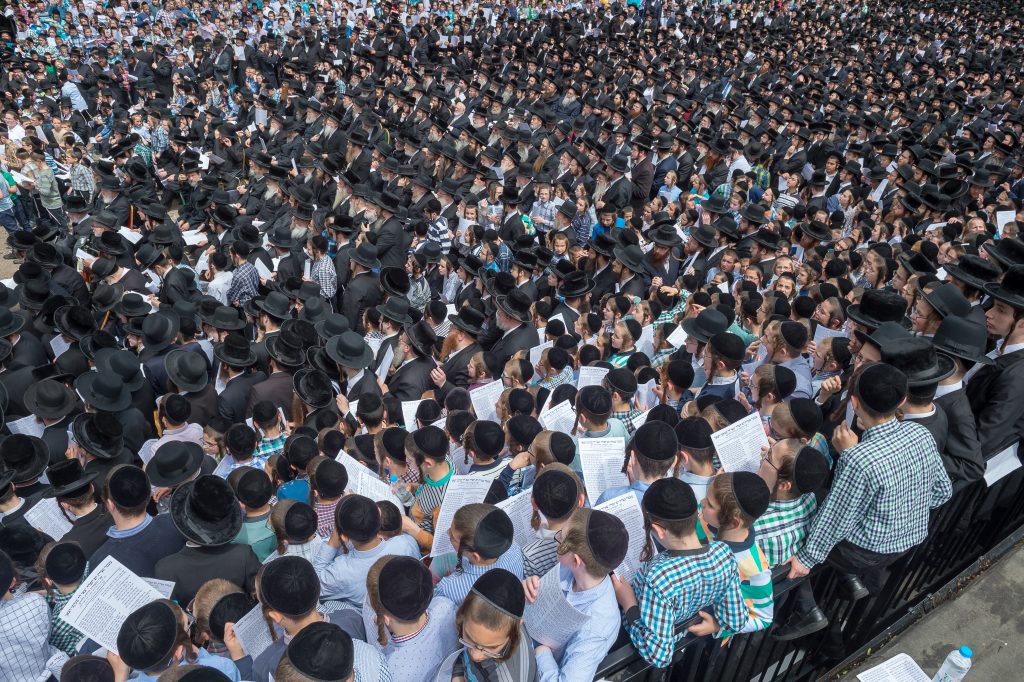 Thousands of people gathered Tuesday in North London to unite the whole kehillah in tefillah. The kinus was called at the initiative of the Mara d’Asra Harav Efraim Padwa, shlita, in response to the very serious threat to the whole chinuch system in the United Kingdom.

The response of the kehillah to the call of the Gaavad was overwhelming, making the occasion probably the largest assembly for Tehillim ever seen in town.

The British government Department for Education (DfE) has recently concluded a consultation process (requests for comment on proposed regulations) that has greatly alarmed the chareidi community. The DfE proposes to force all schools to include in their curriculum topics and discussions that are anathema to the Torah way of life. Under the proposals, any school that does not comply will be summarily closed.

The kehillos in London, Manchester and Gateshead were encouraged to voice their opinions to the consultation, but the government has not yet responded. Large tefillah gatherings have been organized during the past week, culminating in a large asifah in London on Tuesday.

The gathering took place on the grounds of Beis Hamedrash Torah Etz Chaim 69, Lordship Road, and was a clear demonstration of achdus within the community. They all joined together in the face of the common danger to the tinokos shel beis rabban of Klal Yisrael in this country.

For several years now, there have been ongoing areas of conflict between the chareidi school system, the Department for Education and Ofsted, the body which is responsible for inspecting schools. Many of them have been ironed out but there has always been a certain amount of leeway regarding what must be taught, even in a private school, and how many times the schools can be inspected, failed in certain areas and allowed time for improvement. Now, however, a consultation has taken place which if implemented, would tighten up the legislation and lead to the closure of most chareidi schools in the U.K., a fact acknowledged by the government.

Police estimated the size of the crowd to be 7,000 people, including members of every kehillah in North London, every Talmud Torah, every school and all yeshivos and kollelim. Respected Dayanim and Rabbanei ha’ir, talmidei chachamim and leaders of the kehillah could be seen in the vast crowd. Young talmidim from mosdos hachinuch were present, along with young and old men.

The proceedings began promptly at midday when Mr. Avrohom Yaakov Landau asked the Mara d’Asra to give his brief divrei chizuk. A hush fell as Harav Efraim Padwa told the assembly that we have two strengths with which to annul the threatened gezeiros: the zechus of all the tinokos shel beis rabban in whose merit the whole world exists, and the strength of the whole tzibur.

Reb Yisroel Yaakov Frenkel, acting as chairman, called on Harav Pinchos Schneebalg, Rosh Yeshivas Viznitz, to address the asifah. In an emotional and brief drashah, Harav Schneebalg emphasized that the threatened gezeiros aimed to uproot basic tenets of Yiddishkeit. Just as a drowning child appeals to his father to rescue him, our only hope is to turn to Avinu She’baShamayim, Who alone has the power to save us.

The recital of Tehillim was led by the well-known marbitz Torah Rabbi Avrohom Moskowitz. Harav Lippa Braun, Nitra Dayan, led the saying of the Yud-Gimel Ikarim, the Thirteen Basic Principles of our emunah that are the foundation of Yiddishkeit. The asifah continued with the heartfelt recital of the Yom Kippur Neilah piyut on Yud Gimel Middos, led by Rabbi Betzalel Kamionka, Rav Beis Hamedrash ZAI. Finally, the whole assembly recited the Kabbalas Ol Malchus Shamayim, led by the Z’kan Roshei Yeshivah Harav Elyokim Schlesinger, Rosh Yeshivah Yeshivas Horomoh. The Viznitzer Rebbe of London, shlita, said Kaddish to the response of the thousands of voices.

Mr. Landau thanked all those responsible for organizing the maamad, in particular, his son Mr. Yiddel Landau, Mr. Michoel Dov Just, and Mr. Noson Binyomin Bindiger. The family of Reb Moshe Gross, z”l, were also thanked for helping to defray the costs, in memory of their father, whose yahrtzeit fell on that day.

Rabbi Dovid Frand, president of the Union of Orthodox Hebrew Congregations, commented afterwards that the atzeres tefillah was organized in response to the threat to our way of life. The chareidi kehillah has brought up many generations of law-abiding citizens who have contributed much to the stability of the country.

The gathering succeeded in creating a kiddush Hashem, with thousands of men and children gathering with perfect decorum. Rabbi Frand concluded, “This is a tribute to the excellent education and high moral standards that our system delivers; and it is very ironic that this is now under attack!”