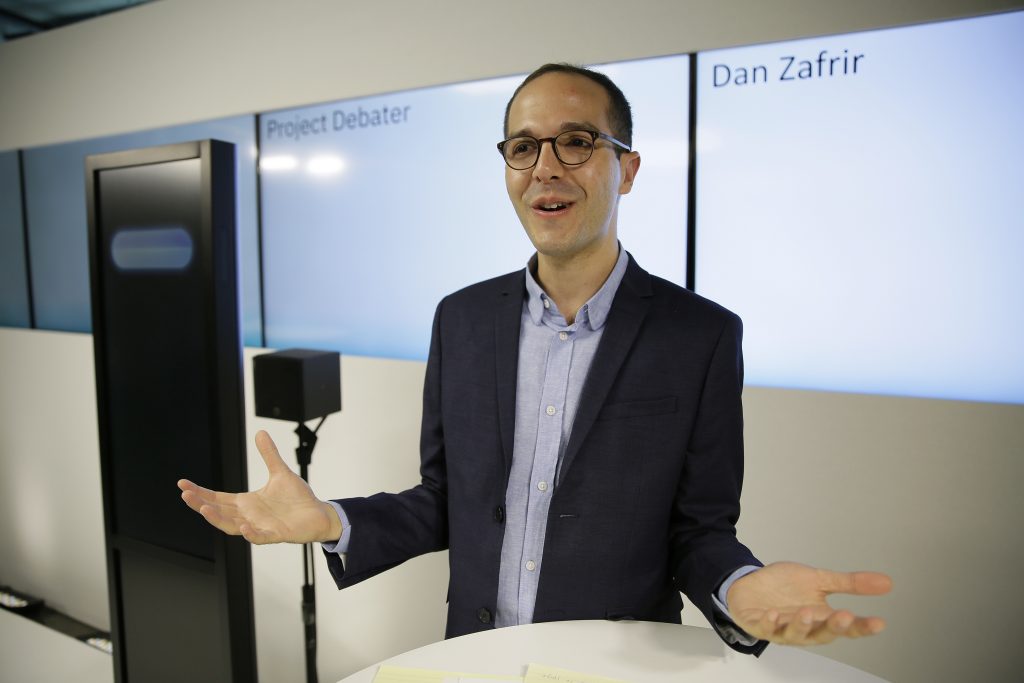 An argumentative computer proved formidable against two human debaters, as IBM gave its first public demonstration of new artificial intelligence technology it’s been working on for more than five years.

The new skills show that computers are getting better at mastering human language and speech.

The computer made its case for government-subsidized space research by pulling in evidence from its huge internal repository of newspapers, journals and other sources. After delivering opening arguments, the computer listened to a professional human debater’s counter-argument and spent four minutes rebutting it.

The company unveiled its Project Debater in San Francisco on Monday. IBM selected possible topics based on whether they were debatable; but neither the computer nor the human debaters knew the topic in advance. Nonetheless, the computer championed the topic fiercely with just a few awkward gaps in reasoning.

“Subsidizing space exploration is like investing in really good tires,” argued the computer system, its female voice embodied in a 5-foot-tall machine shaped like a monolith with TV screens on its sides. Such research would enrich the human mind, inspire young people and be a “very sound investment,” it said, making it more important even than good roads, schools or health care.

After closing arguments, it moved on to a second debate about telemedicine.

An IBM research team based in Israel began working on the project not long after IBM’s Watson computer beat two human quizmasters on a quiz show in 2011.

But rather than just scanning a giant trove of data in search of factoids, IBM’s latest project taps into several more complex branches of AI. Search engine algorithms used by Google and Microsoft’s Bing use similar technology to digest and summarize written content and compose new paragraphs. Voice assistants such as Amazon’s Alexa rely on listening comprehension to answer questions posed by people. Google recently demonstrated an eerily human-like voice assistant that can call hair salons or restaurants to make appointments.

But IBM says it’s breaking new ground by creating a system that tackles deeper human practices of rhetoric and analysis, and how they’re used to discuss big questions whose answers aren’t always clear.

“If you think of the rules of debate, they’re far more open-ended than the rules of a board game,” said Ranit Aharonov, who manages the debater project.

IBM doesn’t try to declare a winner of the debates, but Noa Ovadia, one of the human debaters, said the computer was a formidable opponent, even if it made a few too many blanket statements about space exploration being the pinnacle of human achievement.

Ovadia, a national debate champion in Israel, said she was impressed by its fluency in language and ability to construct sentences. She said the computer was able to “get to the bottom line of my arguments” and respond to them.

Among several outside experts IBM invited to attend Project Debater’s debut was Chris Reed, who directs the Centre for Argument Technology at the University of Dundee in Scotland. Reed said he was impressed by its grasp of “procatalepsis” — a rhetorical technique that involves anticipating an opponent’s argument and preemptively rebutting it.

As expected, the machine tends to be better than humans at bringing in numbers and other detailed supporting evidence. It’s also able to latch onto the most salient and attention-getting elements of an argument, and can even deliver some self-referential jokes about being a computer.

But it lacks tact, researchers said. Sometimes the jokes don’t come out right. And on Monday, some of the sources it cited — such as a German official and an Arab sheikh — didn’t seem particularly germane.

“Humans tend to be better at using more expressive language, more original language,” said Dario Gil, IBM’s vice president of AI research. “They bring in their own personal experience as a way to illustrate the point. The machine doesn’t live in the real world or have a life that it’s able to tap into.”

There are no immediate plans to turn Project Debater into a commercial product; but Gil said it could be useful in the future in helping lawyers or other human workers make informed decisions.