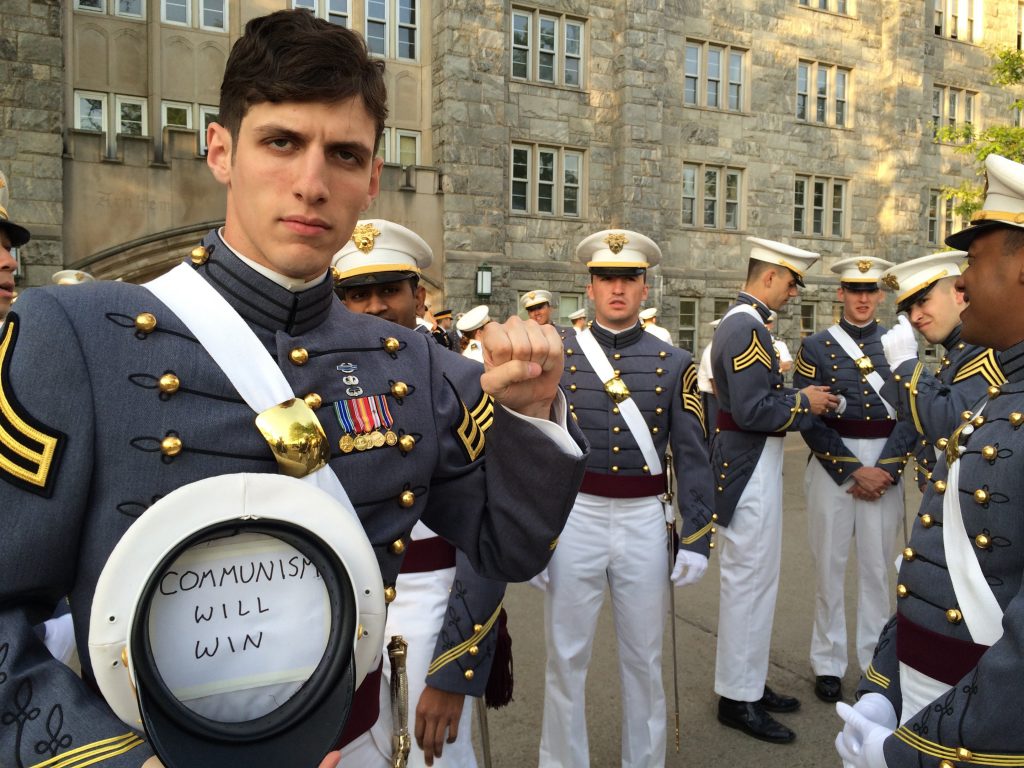 The images Spenser Rapone posted on Twitter from his West Point graduation were intentionally shocking: In one, the cadet opens his dress uniform to expose a T-shirt with a blood-red image of socialist icon Che Guevara.In another, he raises his fist and flips his cap to reveal the message: “Communism will win.”

Less than a year after Rapone’s images drew a firestorm of vitriol and even death threats, the second lieutenant who
became known as the “commie cadet” is officially out of the U.S. Army with an other-than-honorable discharge.

Top brass at Fort Drum accepted Rapone’s resignation Monday after an earlier reprimand for “conduct unbecoming of anofficer.” Rapone said an investigation found he went online to advocate for a socialist revolution and disparage high-rankingofficers. Officially, the Army said in a statement only that it conducted a full investigation and “appropriate action was taken.”

An unrepentant Rapone summed up the fallout in yet another tweet Monday that showed him making a gesture at a sign at the entrance to Fort Drum, accompanied by the words, “One final salute.”

“I consider myself a revolutionary socialist,” the 26-year-old Rapone told The Associated Press. “I would encourage all soldiers who have a conscience to lay down their arms and join me and so many others who are willing to stop serving the agents of imperialism and join us in a revolutionary movement.”

Rapone said his journey to communism grew out of his experiences as an Army Ranger in Afghanistan before he was
accepted into the U.S. Military Academy. And those views only hardened during his studies of history as one of the academy’s “Long Gray Line.”

He explained that he took the offending selfies at his May 2016 West Point graduation ceremony and kept them to himself until last September, when he tweeted them in solidarity with a sportsman kneeling for the national anthem.

West Point released a statement after Rapone posted the photos, saying his actions “in no way reflect the values of the U.S. Military Academy or the U.S. Army.” And U.S. Sen. Marco Rubio, a Florida Republican, called on the secretary of the Army to remove Rapone from the officer ranks.

“While in uniform, Spenser Rapone advocated for communism and political violence, and expressed support and sympathy for enemies of the United States,” Rubio said Monday, adding, “I’m glad to see that they have given him an ‘other-than-honorable’ discharge.”

One of six children growing up in New Castle, Pennsylvania, Rapone said he applied to West Point, which is tuition-free, because he couldn’t afford college. He was nominated out of high school by then-U.S. Rep. Jason Altmire in 2010.

“He was an honors student, an athlete, a model citizen who volunteered in the community,” recalled Altmire, a Democrat. “During the interview, he expressed patriotism and looked just like a top-notch candidate. There were no red flags of any kind.”

But he wasn’t accepted to West Point, so Rapone enlisted in the Army. He was deployed to Afghanistan in 2011 and was assigned as an assistant machine gunner in Khost Province.

“We were bullies in one of the poorest countries on Earth,” Rapone said. “We have one of the most technologically
advanced militaries of all time and all we were doing is brutalizing and invading and terrorizing a population that had nothing to do with what the United States claimed was a threat.”

Toward the end of his deployment, he learned West Point fulfills a certain quota of enlisted soldiers every year. Despite his growing disillusionment about the military, he applied and got in.

“I was still idealistic,” he said. “I figured maybe I could change things from inside.”

In addition to classic socialist theorists such as Karl Marx, Rapone says he found inspiration in the writings of Stan Goff, a retired Special Forces master sergeant who became a socialist anti-war activist.

Even while still a cadet, Rapone’s online postings alarmed a West Point history professor, who wrote Rapone up, saying his online postings were “red flags that cannot be ignored.” Rapone was disciplined but still allowed to graduate.

Greg Rinckey, an attorney specializing in military law, said it’s rare for an officer out of West Point to receive an other-than-honorable discharge. He added that it’s possible the military academy could seek repayment of the cost of Rapone’s education because he didn’t serve the full five-year service obligation required upon graduation.

“I knew there could be repercussions,” said Rapone, who is scheduled to speak at a socialism conference in Chicago next month. “Of course my military career is dead in the water. On the other hand, many people reached out and showed me support. There are a lot of veterans both active duty and not that feel like I do.”