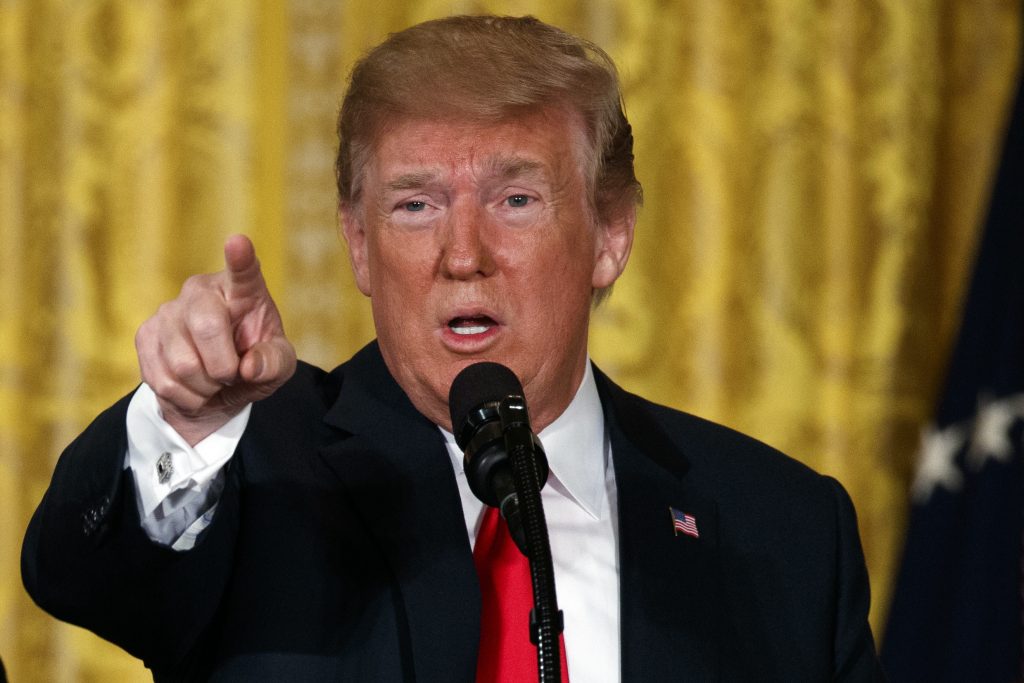 Facing a rising tide of outrage from Democrats and some Republicans over the forced separation of migrant children and parents at the U.S.-Mexico border, President Donald Trump dug in Monday, again blaming Democrats in the escalating political crisis.

Democrats have turned up the pressure over the policy, and some Republicans have joined the chorus of criticism. Former first lady Laura Bush has called the policy “cruel” and “immoral” while GOP Sen. Susan Collins expressed concern about it and a former adviser to Trump questioned using the policy to pressure Democrats on immigration legislation.

Trump continued to cast blame on Democrats Monday, tweeting: “Why don’t the Democrats give us the votes to fix the world’s worst immigration laws? Where is the outcry for the killings and crime being caused by gangs and thugs, including MS-13, coming into our country illegally?”

Homeland Security Secretary Kirstjen Nielsen refused Monday to apologize for enforcing immigration laws that result in the separation of children from their parents. Speaking at a meeting of the National Sheriffs’ Association in New Orleans Monday, she rejected criticism accusing DHS of inhuman and immoral actions.

“We are doing none of those things. We are enforcing the laws passed by Congress,” she said, calling on Congress to reform immigration laws.

Nearly 2,000 children were separated from their families over a six-week period in April and May after Attorney General Jeff Sessions announced a new “zero-tolerance” policy that refers all cases of illegal entry for criminal prosecution. U.S. protocol prohibits detaining children with their parents because the children are not charged with a crime and the parents are.

Nielsen said that releasing parents with their children amounts to a “get out of jail free card” policy for those in the country illegally.

Speaking at the same conference, Sessions echoed Nielsen’s defense of the policy, and called on Congress to act.

“We do not want to separate parents from their children,” Sessions said. “If we build the wall, if we pass legislation to end the lawlessness, we won’t face these terrible choices.”

Trump asserted Monday that children “are being used by some of the worst criminals on earth” as a way to enter the United States. He tweeted: “Has anyone been looking at the Crime taking place south of the border,” calling it “historic.”

The administration pushed back amid rising criticism from both sides of the political aisle. In a guest column for The Washington Post Sunday, Mrs. Bush made some of the strongest comments yet from a Republican.

“I live in a border state. I appreciate the need to enforce and protect our international boundaries, but this zero-tolerance policy is cruel. It is immoral. And it breaks my heart,” she wrote. She compared it to the internment of Japanese-Americans during World War II, which she called “one of the most shameful episodes in U.S. history.”

Underscoring the emotional tension, first lady Melania Trump, who has tended to stay out of contentious policy debates, waded into the issue. Her spokeswoman said that Mrs. Trump believes “we need to be a country that follows all laws,” but also one “that governs with heart.”

“Mrs. Trump hates to see children separated from their families and hopes both sides of the aisle can finally come together to achieve successful immigration reform,” spokeswoman Stephanie Grisham said.

The signs of splintering GOP support come after longtime Trump ally, the Rev. Franklin Graham, called the policy “disgraceful.” Several religious groups, including some conservative ones, have pushed to stop the practice of separating immigrant children from their parents.

Former Trump adviser Anthony Scaramucci said Monday on CNN that it “doesn’t feel right” for the Trump administration to blame Democrats for separating parents and children at the southern border as a way of pressuring Democrats into negotiating on a Republican immigration bill.

“What the administration has decided to do is to separate children from their parents to try to send a message that if you cross the border with children, your children are going to be ripped away from you,” she said. “That’s traumatizing to the children who are innocent victims, and it is contrary to our values in this country.”

Trump plans to meet with House Republicans on Tuesday to discuss pending immigration legislation amid an election-season debate over one of his favorite issues. The House is expected to vote this week on a bill pushed by conservatives that may not have enough support to pass, and a compromise measure with key proposals supported by the president. The White House has said Trump would sign either of those.

This pressure is coming as some White House officials have tried to distance themselves from the policy. “Nobody likes” breaking up families and “seeing babies ripped from their mothers’ arms,” said presidential counselor Kellyanne Conway

Conway rejected the idea that Trump was using the kids as leverage to force Democrats to negotiate on immigration and his long-promised border wall, even after Trump tweeted Saturday: “Democrats can fix their forced family breakup at the Border by working with Republicans on new legislation, for a change!”

Asked whether the president was willing to end the policy, she said: “The president is ready to get meaningful immigration reform across the board.”

To Rep. Adam Schiff, D-Calif., the administration is “using the grief, the tears, the pain of these kids as mortar to build our wall. And it’s an effort to extort a bill to their liking in the Congress.”

The House proposals face broad opposition from Democrats, and even if a bill does pass, the closely divided Senate seems unlikely to go along.

Steve Bannon, Trump’s former chief strategist, said that Republicans would face steep consequences for pushing the compromise bill because it provides a path to citizenship for young “Dreamer” immigrants brought to the country illegally as children. Bannon argued that effort risked alienating Trump’s political base and contributing to election losses in November, when Republicans hope to preserve their congressional majorities.