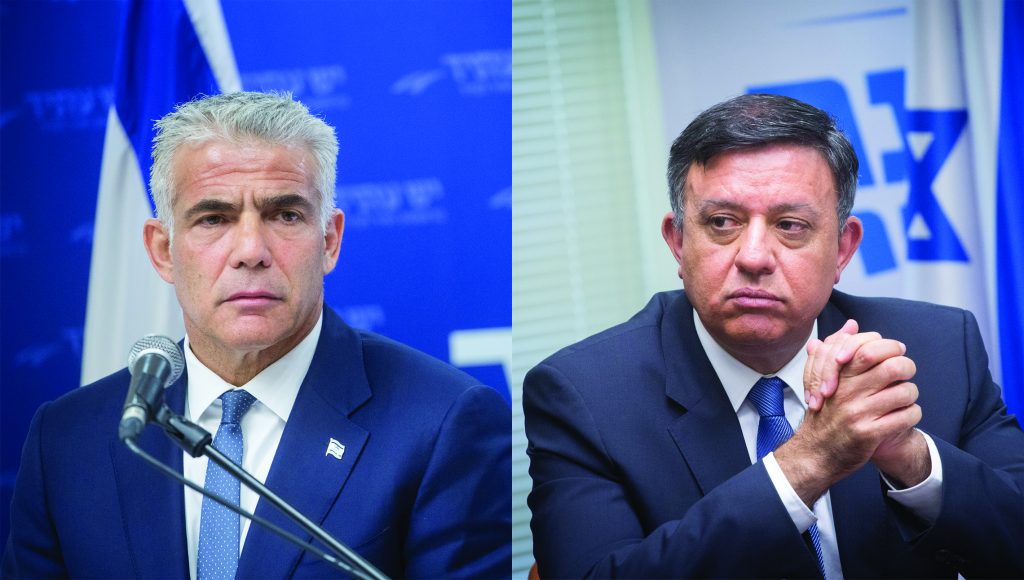 The Yesh Atid and Labor parties are reportedly split on whether to support the Defense Ministry recommendations for a new chareidi conscription law.

“I’m saying this now, clearly—we will vote against the draft law,” Gabbay said. “Our principles are known—we want every young man and woman to either do military service, national service or civic service,” he was quoted by Ynet as saying.

He criticized the current proposal on the grounds of inequality, since it sets out different criteria for recruitment of chareidim versus the general population.

“This proposal has no equality in carrying the burden of service or real rewards for serving soldiers,” he said.

It is likely that secular groups will petition to the High Court on the inequality issue, which the judges take very seriously. However, due to the fact that the military itself formulated the proposals to address its manpower needs, the Court may be hard put to invalidate it.

Lapid, on the other hand, claimed that the ministry’s recommendations are “a repeat of Yesh Atid’s law,” which was passed in March 2014 when his party was in the coalition and amended after the 2015 elections, following which his party was left in the opposition.

“This time, both the IDF and the chief of staff support this plan,” Lapid said.

However, the plan differs on certain fundamental points from his party’s plan. For example, the new proposals include no criminal sanctions, and the financial penalties are aimed at the yeshivah budget in general, not against individuals who fail to comply, as was the case in the 2014 law.

Nevertheless, Lapid urged that the law be passed without revisions.

“I have no expectations from the prime minister…But the defense minister cannot change even one word in this plan. He made a commitment to the public that he would give full backing to the IDF and Defense Ministry,” Lapid said.

In the coalition, meanwhile, it is not clear how Israeli Prime Minister Binyamin Netanyahu, who said on Sunday he wants the bill passed in two weeks, expects to obtain support from United Torah Judaism and Shas, which have objected strongly to the bill in its present form.

“This is the most balanced and stately law. There’s consensus about the bill in both the coalition and opposition.”

He called on members of Knesset “to leave your disputes and score-settling behind and unite around the plan formulated by the defense establishment.”

Education Minister Naftali Bennett dismissed reports of a crisis in the coalition over the issue, calling it a “fake crisis.”

Bennett described it as “a proportional law that provides solutions for everyone—a moderate and proportional recruitment of ultra-Orthodox without coercion or force.”

“I believe this thing is entirely solvable. This bill can pass. We’ll cooperate and help resolve this matter to maintain a stable government until the elections,” he added.