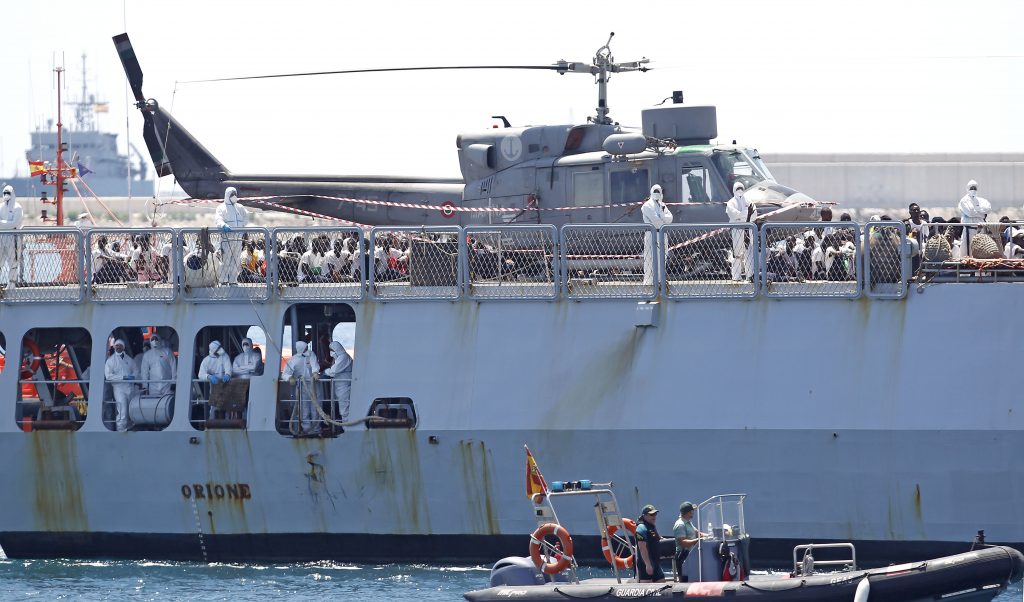 Ships in the Aquarius aid convoy docked Sunday at the Spanish port of Valencia, ending a weeklong ordeal for hundreds of people who were rescued from the Mediterranean Sea only to become pawns in Europe’s fight over immigration.

The Italian coast guard vessel Dattilo was the first of the three boats bearing the 630 migrants to touch land just before 7 a.m. Sunday. The 270 migrants on board soon began to disembark after medical staff had made a preliminary inspection.

The rescue ship Aquarius came in four hours later with another 106 migrants. Aid workers awaiting their arrival clapped and cheered as the first migrants walked down the gangway. Another Italian navy ship, the Orione, came in shortly after 1 p.m.

The Aquarius, operated by the aid groups SOS Mediterranee Sea and Doctors Without Borders, was stuck off the coast of Sicily on June 9 when Italy’s new populist government refused it permission to dock and demanded that Malta do so. Malta also refused.

After days of bickering and food and water running low on the ship, Spain stepped in and granted the rescue boat entry. The 1,500-kilometer (930-mile) journey across the Mediterranean from Sicily to Valencia took nearly a week.

David Noguera, the head of Doctors Without Borders in Spain, said he was glad Spain allowed the migrants in but he’s worried that more European nations will close their ports to those rescued at sea in the future.

“I have mixed feelings,” Noguera told The Associated Press as the first boat arrived. “I am happy that the journey (for the Aquarius migrants) is over, a journey that was too long, and I am worried for the situation in the Mediterranean and the closing of European ports.”

The migrants were met by emergency workers, health officials, Red Cross volunteers and psychologists at the city’s marina. Each were assigned to a translator, and authorities worked to determine their identities before they were sent to welcome centers. The first migrant was a 29-year-old man from South Sudan.

Valencia emergency official Jorge Suarez said some of the migrants were in a state of shock.

“They are very shaken,” Suarez said. “Put yourself in their position, you get off a ship and the first people who greet you are wearing masks.”

He said an examination of the 130 migrants from the Dattilo did not reveal any serious health problems but many passengers showed signs of exposure to high temperatures at sea.

Spanish authorities are examining the migrants on a case-by-case basis to see who may qualify for asylum.

Due to their ordeal, the migrants from the Aquarius have been granted special authorization to remain in Spain for 45 days before they must begin resolving their legal situation.

“We have to strike a balance between our sensibilities and humanity and our respect for the law,” said Spain’s migration minister, Magdalena Valerio.

“These people could not be left adrift in the Mediterranean, where they would face death,” she told Spanish radio Cope. “(The EU) must recognize that it needs an immigration policy that these times require.”

The migrants reportedly include 123 unaccompanied minors, 11 children and as many as seven expectant women. After Spain invited the Aquarius to land, Italy sent the Dattilo and Orione to help transport the migrants.

Meanwhile, several hundred more migrants were aboard an Italian coast guard vessel off Sicily on Sunday. The passengers came from a series of rescues in recent days, including ones carried out by cargo ships that the Rome-based coordination center asked to aid migrant boats in distress.

They also counted 41 migrants who were taken aboard a U.S. Navy vessel on June 12, survivors of a sunken dinghy. A private aid ship said it couldn’t assume the unexpected passengers from Trenton because Italy wasn’t assigning it a port within its navigational capacity.

The rescued people stayed on the Navy boat for several more days before being transferred to the Italian coast guard vessel on Sunday morning.

The destination wasn’t immediately announced, but the coast guard said it wouldn’t dock until at least Tuesday.

Italy’s new interior minister, Matteo Salvini, thanked Spain for taking in the migrants who reached Valencia and said he wished the country would take in “66,629 more.”

Salvini, who heads the right-wing League party, said that if France, Malta and Portugal also open their ports to migrants rescued from smugglers’ unseaworthy boats, “we’ll be happier.”

The refusal by Italy and Malta to allow the Aquarius to dock has reignited a continentwide battle over how to handle immigration.

Under the EU’s asylum laws, currently the subject of a major political dispute and under revision, migrants must apply for asylum in the country where they first enter Europe. In practice, the policy has placed a heavy burden on Italy and Greece, where hundreds of thousands of asylum-seekers have arrived in recent years.

Spain’s new Socialist government has taken up the cause of the migrants to demonstrate its commitment to protecting human rights.

But overall, the European Union’s 28 members have not agreed in the least how to handle the influx of refugees and migrants to Europe. The issue has put strong domestic pressure on German Chancellor Angela Merkel, created a spat between France and Italy, and prompted eastern nations like Hungary and Poland to refuse to take in any migrants.

Immigration will be a top issue at the EU leaders’ June 28-29 summit. In addition, a new populist government in Italy, one whose interior minister has vowed to deport tens of thousands of migrants as soon as he can, will make any compromises on EU migration policy even more difficult.

The warmer weather has caused a spike in migrants taking off from North Africa for Europe. Spain’s maritime rescue service pulled 986 people from 69 small smuggling boats near the Strait of Gibraltar between Friday and Saturday, and also recovered four bodies.

At least 792 migrants have died crossing the Mediterranean so far this year, according to the United Nations. Through the first five months of 2018, some 35,455 migrants reached European shores.