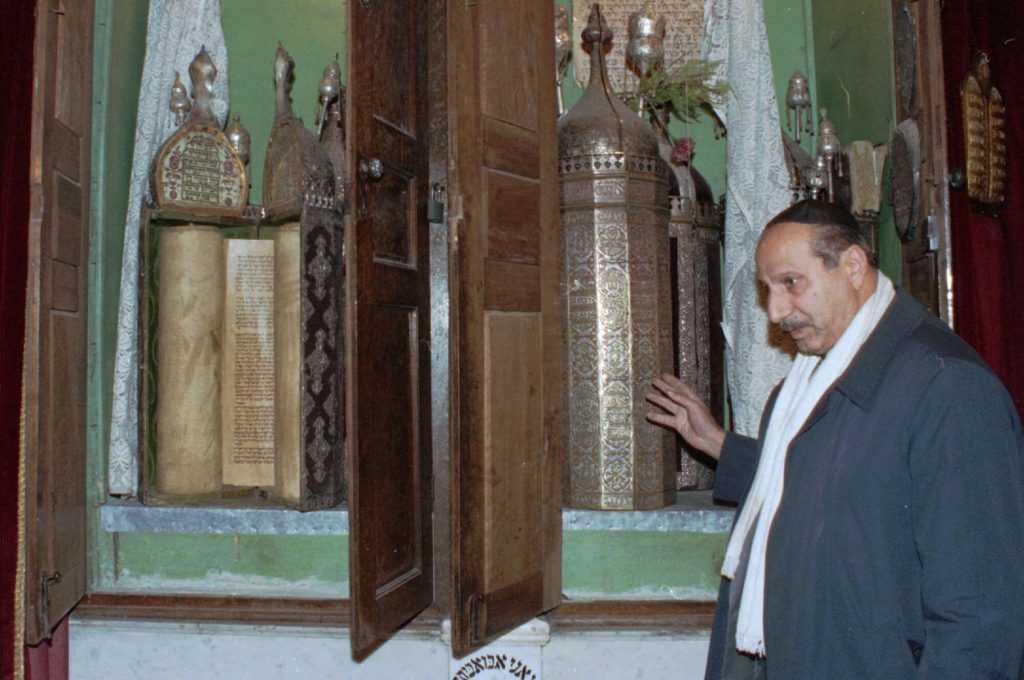 Jewish artifacts, including ancient sifrei Torah from one of the world’s oldest synagogues, have gone missing from the Syrian capital amid the tumult of the ongoing civil war, with some precious items reportedly surfacing abroad.

Activists say the artifacts, moved from the now-destroyed Jobar Synagogue in Damascus’s eastern Ghouta suburb when it was taken by rebels, were allegedly put into safekeeping to avoid theft and damage in 2013, but twice since then local officials have discovered some are missing.

The main missing cache, they say, contained sifrei Torah written on gazelle leather as well as tapestries and chandeliers, and was given to a militia by a local council for safekeeping when rebels surrendered the neighborhood to government forces earlier this year. That group, the Islamist-inspired Failaq al-Rahman brigade, later said that it was not in possession of the items after the council arrived at a new rebel base in Syria’s north after evacuating earlier this year.

Another set of objects appears to have been stolen by a Syrian guardian entrusted by the local council to hide the items in his home. The man, who officials involved declined to name, disappeared with the artifacts in 2014 before some allegedly resurfaced in Turkey.

“Some of the items that went missing in 2014 and this year have started surfacing now in Turkey,” said an activist who lived near the synagogue his whole life until fleeing the area in March after a crushing government offensive. The man, who goes by the name of Hassan al-Dimashqi, said the ensuing government airstrikes and bombardment destroyed most of the synagogue and the surrounding neighborhood, although some of the building’s pillars remain standing.

The synagogue, also known as Eliyahu Hanavi, is one of the few Jewish places of worship in Syria that was functioning until shortly before the conflict began in March 2011. Residents of the neighborhood remember how less than a dozen Jews, most of them over 50, came quietly once a week to pray.

Videos and photographs from the synagogue taken before the war show a main hall of arches lined with seats and tapestries. Chandeliers and lanterns hang from the ceiling as well as a marble stone with writing in Arabic, Hebrew and Latin.

During a visit by an Associated Press photographer to the synagogue in January 2000, Youssef Jajati, a Jewish community leader in Syria at the time, showed the sifrei Torah stored in a silver container inside a cupboard.

Al-Dimashqi said that for months after rebels seized the neighborhood in 2013, the synagogue was protected by the main local force in Jobar, known at the time as the Haroun al-Rashid Brigade. Later that year local officials formed a committee that decided to empty the building and hide its contents, he added.

Some local officials say the man who disappeared in 2014 reached Europe and the artifacts he took ended up in Israel, according to al-Dimashqi, although his ultimate fate and that of the antiquities remain unknown.

The whereabouts of the items entrusted with Failaq al-Rahman have not been verified, although al-Dimashqi and the Britain-based Syrian Observatory for Human Rights, a war monitor, say some of the pieces, including carpets, chandeliers and historical scripts, have surfaced in Turkey.

Turkish state media reported in May that authorities had detained five people in the country’s northwest who were trying to sell two old sifrei Torah for 8 million Turkish lira ($1.7 million). It said the manuscripts were written on gazelle leather.

Maamoun Abdul-Karim, who until recently was Syria’s director-general of antiquities and museums, has publicly urged the Turks to verify the manuscripts’ authenticity. In the 1990s, rumors circulated in Damascus that the originals had been stolen, switched with copies, and smuggled to Israel, he added.

Failaq al-Rahman has denied having any role in the artifacts’ disappearance, challenging accusers to present proof that would show otherwise. Meanwhile, two officials from Jobar’s Local Council, which had initially organized the hiding away of the artifacts, refused to speak to the AP, fearing for their safety.

In the Middle Ages, Syria was home to one of the largest Jewish settlements in the world, with most living in the Damascus area. Jewish life really blossomed in the city after 1099, when Christian armies conquered Yerushalayim in the First Crusade and massacred the city’s inhabitants. Historians say 50,000 Jews fled to Damascus, making almost one in three Damascenes Jewish almost overnight. Some became government ministers and advisers, and the community grew to around 100,000 by the turn of the 20th century.

Tens of thousands of Jews fled following Israel’s creation in 1948, while others held in Syria against their will finally emigrated once they were allowed to when Middle East peace talks began in the 1990s.

Syria has accused Israel, with whom it has been in a state of war for 70 years, of stealing the artifacts with the help of Turkey, a more recent enemy. Syria’s ambassador to the United Nations, Bashar al-Ja’afari, publicized the accusation with a letter in March, saying the two countries’ intelligence services worked with the rebels to smuggle them to Istanbul, where experts confirmed them as “extremely valuable,” then New York.

Israel denies involvement and accuses Syria of trying to distract world attention away from the civil war.