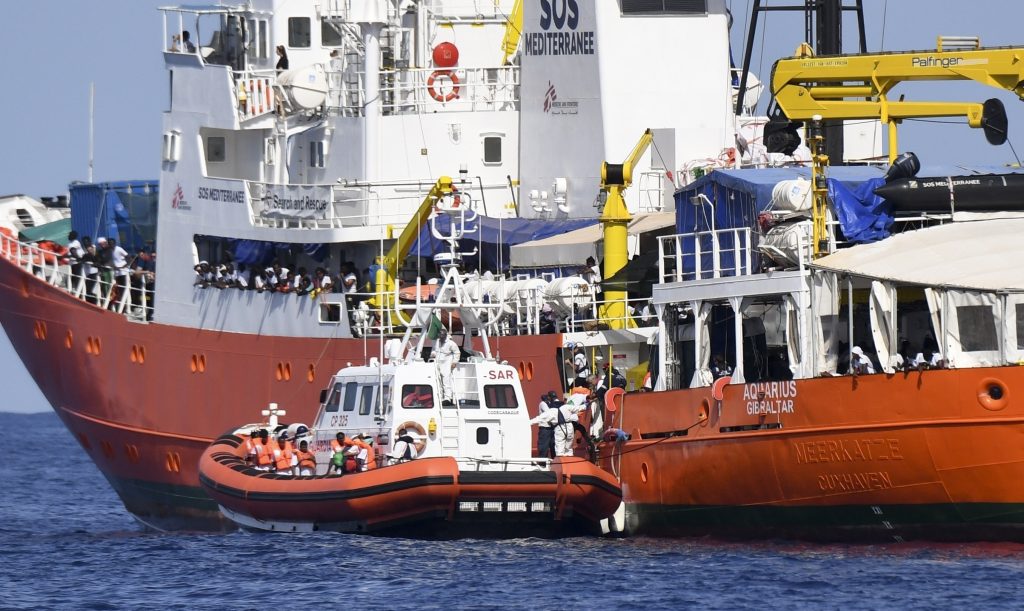 The first Italian government ship accompanying the migrant aid vessel Aquarius with 630 people aboard on Sunday docked at the Spanish port of Valencia, ending a weeklong perilous crossing of the Mediterranean.

Medical staff boarded the Italian Coast Guard vessel Dattilo after it arrived just before 7 a.m. It will be followed by the Aquarius and another Italian navy ship, the Orione, in the coming hours.

The Aquarius, operated by the aid groups SOS Mediterranee Sea and Doctors Without Borders, was stuck off the coast of Sicily last Saturday when Italy refused permission to dock and demanded Malta do so. Malta also refused and Spain stepped in and offered to grant them entry some 930 miles away.

The migrants were met by emergency workers, including health officials and psychologists, at the city’s marina.

Spanish authorities have said they will examine the migrants case-by-case to see if they qualify for asylum according to the country’s regulations.

Spain’s Minister of Public Works Miguel Angel Abalos said Saturday that the migrants from the Aquarius will be granted a “special authorization” to remain in the country for one month before “they will be dealt with according to our laws without exception.”

Abalos said that the Spanish government “will act with sensitivity and at the same time within the law, and with a message to Europe that it doesn’t have an immigration policy up to the challenge at hand.”

The boatload of migrants that was forced to spend days crossing the western Mediterranean includes 123 unaccompanied minors, 11 children and as many as seven pregnant women, according to Valencia’s regional authorities.

Spain has accepted the French government’s offer to take in those migrants who want to go to France “once they have fulfilled the protocols established for their arrival.”

The refusal by Italy and Malta to allow the Aquarius to enter their ports has created a row between European Union members over how to handle immigration.

Under the EU’s asylum laws — currently the subject of a major political dispute and under revision — migrants must apply for asylum in the country where they first enter Europe. In practice, the policy has placed a heavy burden on Italy and Greece, where hundreds of thousands of asylum-seekers have arrived in recent years.

Spain’s new Socialist government has taken up the cause of the migrants’ plight to demonstrate its commitment to protecting human rights and respecting international law.

The arrival of the Aquarius convoy comes during a spike of seaborne migrants crossing from African shores to southern Spain. Spain’s maritime rescue service pulled 986 people from 69 small boats its rescue craft reached in waters in or near the Strait of Gibraltar between Friday and Saturday. It also recovered four bodies.

Fleeing violent conflicts or extreme poverty, thousands of migrants attempt the dangerous journey into Europe each year in smugglers’ dinghies.

At least 792 migrants have died crossing the Mediterranean so far this year, according to the United Nations. Through the first five months of 2018, a total of 35,455 migrants reached European shores, with 11,792 of them arriving in Spain.