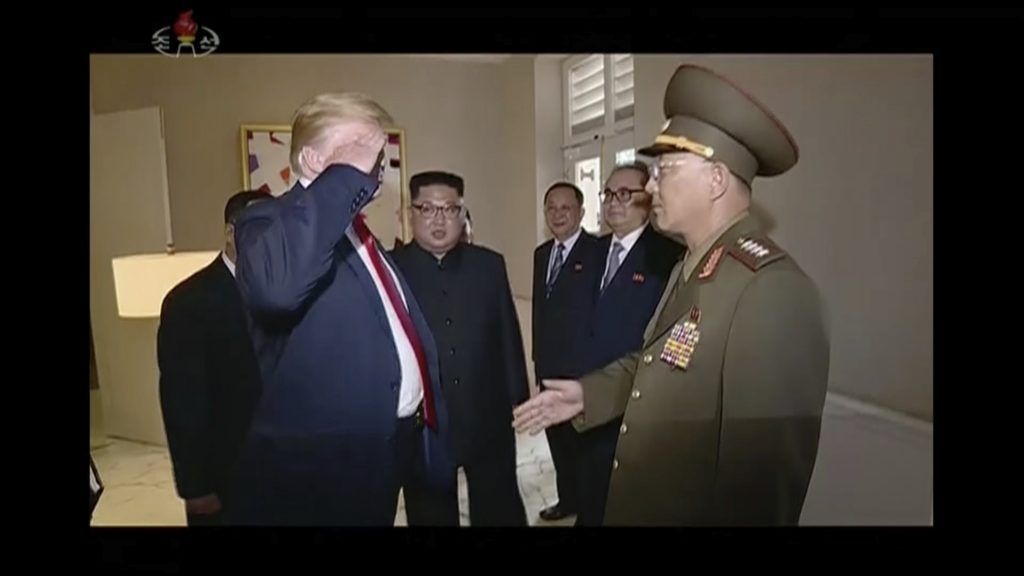 “It’s a common courtesy when a military official from another government salutes, that you return that,” presidential spokeswoman Sarah Huckabee Sanders told reporters two days after Trump returned from his summit with North Korea’s Kim Jong Un.

North Korean state media released video from the visit of Trump reaching out to shake the hand of the minister of the People’s Armed Forces, who instead saluted during the summit in Singapore. The two then reversed gestures, with Trump saluting and the general reaching out to shake hands. The two eventually shook hands.

The awkward moment raised some eyebrows because the U.S. and North Korea technically are still at war.

“I have never seen an American president salute an officer of another military, let alone a military that acts as a brutal enforcer of human slavery and awful prison camps in a gulag across its nation,” said James Stavridis, a retired Navy admiral who served as the top NATO commander. “It was a mistake.”

The protocol on how American presidents should meet foreign leaders is murky. During the 2012 presidential campaign, Trump went after President Barack Obama for bowing to the Saudi king, tweeting: “@BarackObama bowed to the Saudi King in public — yet the Dems are questioning @MittRomney’s diplomatic skills.”

Obama also took some grief in 2014 for saluting with a coffee cup in his hand as he stepped off Marine One in New York. The “latte salute,” had its own hashtag on Twitter.