National Trump Says FBI Was ‘Plotting Against My Election’
National 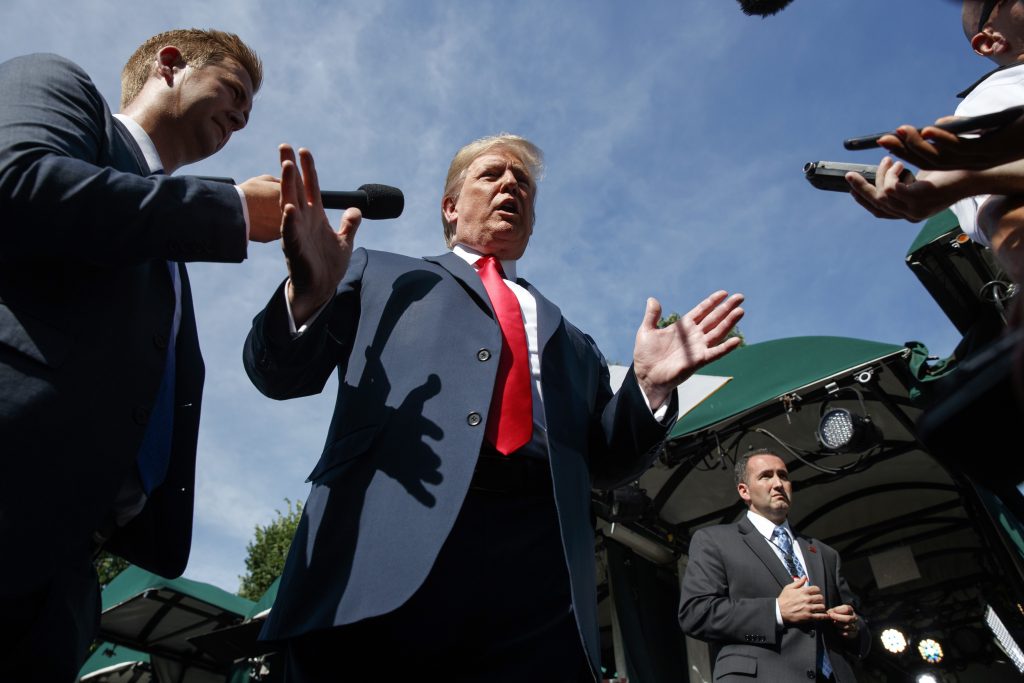 President Donald Trump disputed findings by the Justice Department on Friday that former FBI Director James Comey’s handling of the Hillary Clinton email probe was not politically motivated, declaring that the FBI was biased “at the top level” and “plotting against my election.”

The department’s inspector general report, while critical of the FBI and Comey personally, did not find evidence that political bias tainted the investigation of Clinton’s email practices in the months and days leading up to Trump’s election.

But on Friday, after tweeting that he did a “great service” to the nation by firing Comey, Trump marched out to the White House North Lawn to talk with Fox News for more than half an hour, saying that the report “totally” exonerated him, then pointing to accomplishments he said he’s achieved and complaining about not getting proper credit. Then he turned to other reporters and went over the same list for another 20 minutes.

On the inspector general report that found no political bias in the FBI’s final conclusions, he said, “The end result was wrong. There was total bias.”

Trump’s comments followed the IG’s 500-page report that said Comey was “insubordinate” in his handling of the Clinton investigation because he broke agency protocol. The report also rebuked FBI officials for exchanging anti-Trump text messages during the 2016 campaign.

But it said, “We found no evidence that the conclusions by the prosecutors were affected by bias or other improper considerations; rather, we determined that they were based on the prosecutors’ assessment of the facts, the law and past department practice.”

Trump’s supporters have argued that the findings are proof of political bias at the FBI’s highest levels that then tainted the Russia investigation, first led by the FBI and now by special counsel Robert Mueller. Mueller’s probe includes a look into whether Trump himself tried to obstruct justice by firing Comey.

Trump said Friday, as he has before, that the Mueller probe, too, “has been totally discredited.”

“The IG Report is a total disaster for Comey, his minions and sadly, the FBI,” Trump tweeted earlier. “Comey will now officially go down as the worst leader, by far, in the history of the FBI. I did a great service to the people in firing him. Good Instincts.”

Trump’s personal lawyer, Rudy Giuliani, told Fox News that the report casts doubt on whether Trump will ever agree to an interview with Mueller’s team because “why would he get interviewed by a corrupt investigation?”

Trump himself said he had “reservations.”

Thursday’s report documents in painstaking detail one of the most consequential investigations in modern FBI history and reveals how the bureau, which for decades has endeavored to stand apart from politics, came to be entangled in the 2016 presidential election. It underscores efforts by FBI and Justice Department leaders to juggle developments in the Clinton investigation — she had used private email for government business while secretary of state — with a separate probe that was then unknown to the American public into potential coordination between the Trump campaign and Russia.

The IG found that the FBI director erred when he announced in July 2016 that Clinton had been “extremely careless” with classified material but would not be charged with any crime, and again months later when Comey told Congress just days before the election that the investigation into Clinton’s emails had been reopened. Comey concealed from the Justice Department his plans to make a public announcement until the morning he did so, even though such statements are normally handled by the Justice Department, if at all, the report says.

“We found that it was extraordinary and insubordinate for Comey to do so, and we found none of his reasons to be a persuasive basis for deviating from well-established Department policies in a way intentionally designed to avoid supervision by department leadership over his actions,” the report says.

Trump supporters, and then the president himself, quickly focused on the report’s recounting of anti-Trump text messages from two FBI officials who worked the Clinton probe and later the Russia case, including one in which an agent says, “We’ll stop it,” with regard to a possible Trump victory.

The report suggests that text from Peter Strzok, who was later dropped from Mueller’s team, “implies a willingness to take official action to impact the presidential candidate’s electoral prospects.” It did not find evidence that those views seeped into the investigation.

FBI Director Chris Wray told reporters the FBI accepted the report’s findings and was making changes, including requiring further training for FBI employees and re-emphasizing the importance of objectivity. In a New York Times opinion piece released after the report, Comey said he disagreed with some conclusions but respected the watchdog’s work.

Also criticized in the report was Comey’s decision, despite the discouragement of the Justice Department, to reveal to Congress that the FBI was reopening the investigation following the discovery of new emails.

The FBI obtained a warrant nine days before the presidential election to review those emails, found on the laptop of former U.S. Rep. Anthony Weiner, D-N.Y., — the husband of top Hillary Clinton aide Huma Abedin — and ultimately determined there was nothing that changed its original conclusion.

The report faulted the FBI for failing to act with more urgency in reviewing emails from Weiner’s laptop, saying the inaction had “potentially far-reaching consequences.” Clinton supporters say her name could have been cleared well before the election had the FBI moved more quickly to review the emails. Comey said had he known earlier about the laptop’s import it might have affected his decision to notify Congress.

“But my emails,” she said, reacting in a three-word tweet.