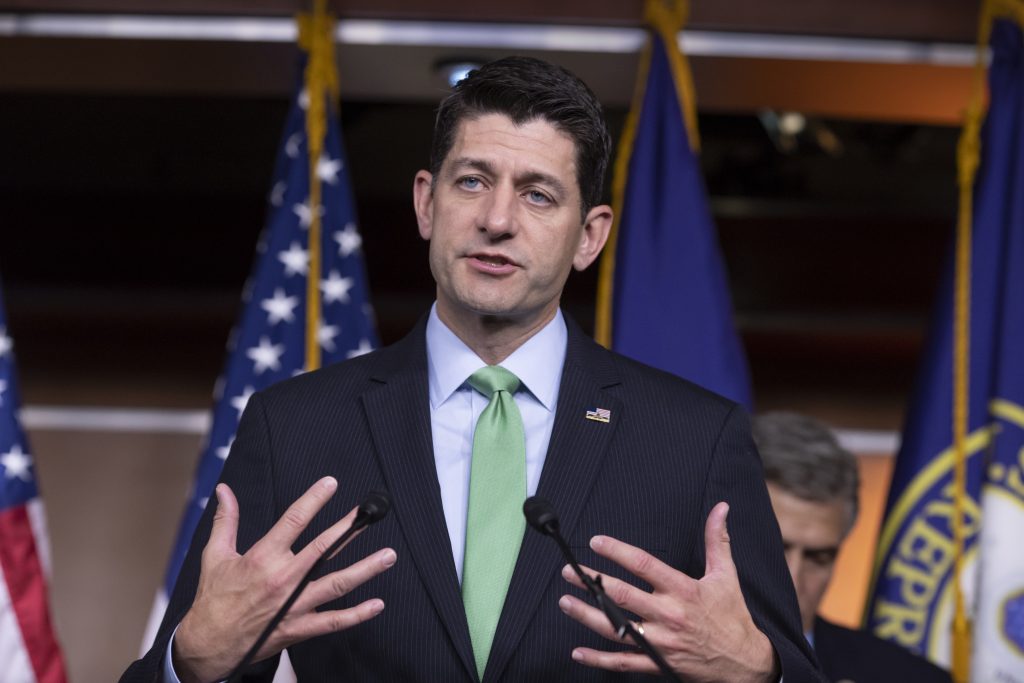 “We don’t want kids to be separated from their parents,” Ryan said.

Ryan and other GOP lawmakers said they are seeking to resolve the problem in a compromise immigration bill House Republicans are racing to finish. That bill is set to receive a vote next week.

Ryan claimed Thursday that the family-separation policy is being dictated by a court ruling that prevents children who enter the country illegally from being held in custody for long periods.

But House Democratic Leader Nancy Pelosi pushed back on that assessment, saying that President Donald Trump could “stop the practice on a dime.”

She called the Trump administration’s separation policy “barbaric,” adding: “It has to stop.”

The family separations are occurring as a result of the Trump administration’s “zero tolerance” policy for those entering the country illegally. Under the directive, families crossing the border are routinely referred for criminal prosecution. Previously, families were often sent to civil deportation proceedings, which allow children to remain with their parents.

During the criminal proceedings, the children are usually released to other family members or foster care.

The administration’s policy has become a political flashpoint, at a time when House Republican leaders are trying to craft compromise legislation on immigration. The bill aims to address thorny issues that have bedeviled Congress for years.

Some Republicans have begun distancing themselves from the Trump policy, as news stories have highlighted that families are being separated as they enter the country illegally from Mexico. Many of those families are seeking asylum in the U.S.

Sen. James Lankford, R-Okla., tweeted Thursday that he told a constituent that, “I am asking the White House to keep families together as much as we can.”

Rep. Kevin Yoder, R-Kan., said he’s “heartbroken” by the separations, and is working to find a solution to keep families together. His comments were in response to a letter from local officials urging him to demand that the Department of Homeland Security end the practice.

“As a father to two young girls, it is unimaginable what these parents are suffering,” Yoder said.

With horror stories of babies and young children being taken from their mothers receiving heavy news coverage, the White House sought to shift the narrative by providing some media groups with a tour of a former Wal-Mart near the border in Texas that houses several hundred immigrant children.

The tour was tightly controlled, and the Health and Human Services Department did not allow any photographs or video or interviews, instead releasing a government-produced video of the shelter.

The Associated Press declined to participate in the tour, which came after a Democratic senator tried to enter a federal facility in Texas where immigrant children are being held. Police were called, and Sen. Jeff Merkley of Oregon was told to leave.

Merkley said he was able to enter another facility used for processing migrants and run by the Department of Homeland Security. He said he saw men, women and children crowded in cages.

“It reminds me a little bit of a dog kennel, constructed of cyclone fencing,” Merkley told the AP.

The U.S. Conference of Catholic Bishops also weighed in, saying U.S. officials have discretion to keep families intact. “Separating babies from their mothers is not the answer and is immoral,” said Cardinal Daniel DiNardo, president of the bishops group.

Historically, immigrants without serious criminal records have been released from custody while they pursued asylum or refugee status. The Trump administration has moved to detain more people, including asylum seekers.

Attorney General Jeff Sessions insists that the policy of separating families is necessary to deter illegal border-crossings. Authorities say the decision to send people to prisons is a temporary one forced by a shortage of beds.

Lawmakers are considering ways to prevent family separations, although it’s unclear what approach the emerging compromise legislation in the House will take.

One idea is to revisit longstanding rules under the so-called Flores agreement, a decades-old legal settlement that prevents children who enter the country illegally from being held in custody for long periods. Critics say the settlement leaves few options but to separate families as parents are being detained.

The White House wants to change the rules. But advocates for immigrants have warned against simply allowing longer detentions for the kids.

Pelosi said that if Republicans really wanted to tackle the issue of separating families, they could bring a bill to the House floor on an expedited basis. She said she sees no prospect for a legislative fix in the Republican-controlled Congress in an election year.

Ryan, R-Wis., said the House would vote next week on two competing immigration measures, but said he “won’t guarantee passage.”

One bill being pushed by GOP conservatives would give young “Dreamer” immigrants limited opportunities to remain in the U.S., while imposing tough restrictions on legal immigration and bolstering border security. That bill is not expected to pass.

GOP leaders, negotiating with quarreling moderates and conservatives, are still writing the second bill. Republicans said it would contain a way for Dreamers to qualify for permanent residence and potentially become citizens, while accepting conservatives’ demands to finance Trump’s proposed border wall with Mexico and restrictions on legal immigration.

With Republicans battling to keep their House majority in November’s elections, merely staging the immigration votes — win or lose — achieves some political objectives. The plan helped party leaders block unhappy moderates trying to force the House to consider immigration bills considered too liberal by many Republicans, and will let lawmakers assert that they moved to address the issue.