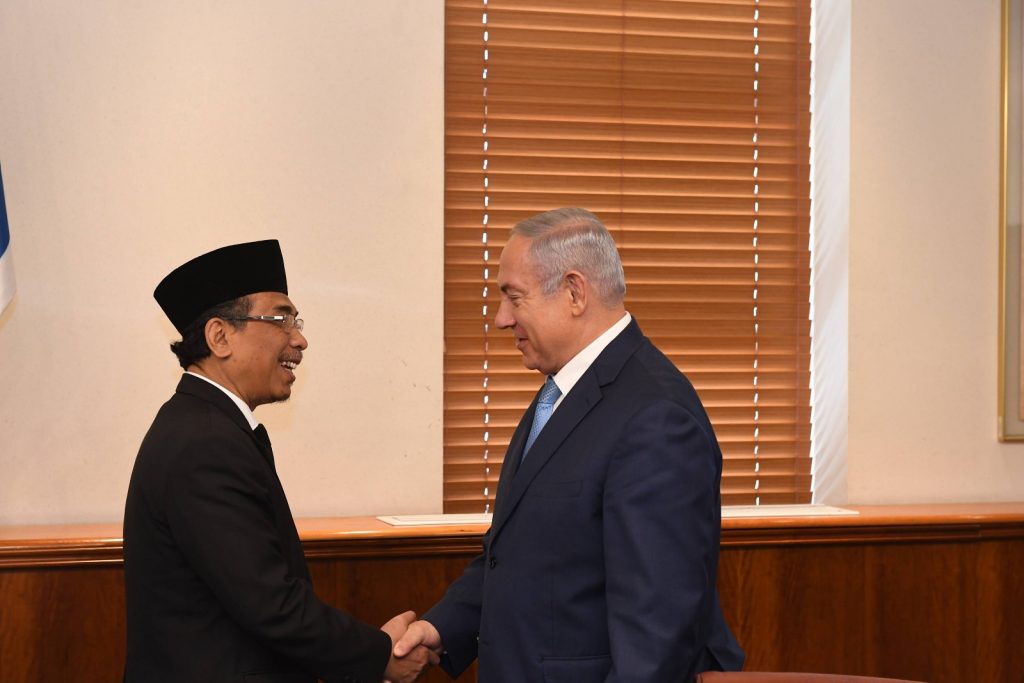 The leader of Indonesia’s largest Muslim organization has held a surprise meeting with Israel’s prime minister.

Yahya Staquf, secretary general of the 60-million-member Nahdlatul Ulama, is visiting Israel at the invitation of the American Jewish Committee, a U.S. advocacy group.

Israel and Indonesia do not have diplomatic relations, and the visit has prompted protests in Indonesia.

Staquf, an advocate of interfaith coexistence, met with several religious leaders this week. However, Thursday’s meeting with Prime Minister Binyamin Netanyahu was not listed on his schedule.

Netanyahu boasted of Israel’s warming ties with Muslim countries, saying “I hope that we have some movement with Indonesia.”

The Prime Minister told him that many Muslim countries are getting closer to Israel for various reasons; the first is security — the common struggle against the Iranian regime and Daesh, and the second is technology, according to a statement released by the Israel General Press Office.

There were many angry protests on social media back home over Staquf’s visit to Israel.

But in an interview, Staquf said he remains committed to the visit and hopes the controversy can bring more attention to his message of tolerance.

“Some people here are amazed by my decision to come, because they think it must be dangerous for this man to come, thinking that many, many Muslims must be threatening him with death or something,” Staquf told the Associated Press on Monday.

Earlier this week, Staquf addressed the American Jewish Committee’s conference, appearing alongside a rabbi in his discussion.

His schedule also includes meetings at the Hebrew University, and talks with local Jewish, Christian and Muslim leaders.

Speaking of the Israeli-Palestinian conflict, he said, “We are facing a civilizational problem here; and it is related to religions. As Muslims, we want to do our part related to our religion.”

Staquf says he has identified portions of Islam that he considers problematic, including how Muslims interact with non-Muslims. He says there needs to be “a new discourse” to recognize that Muslims and non-Muslims are equal, and should be able to coexist peacefully.

“These elements are problematic, because they are not compatible anymore with the current reality of our civilization,” he said.