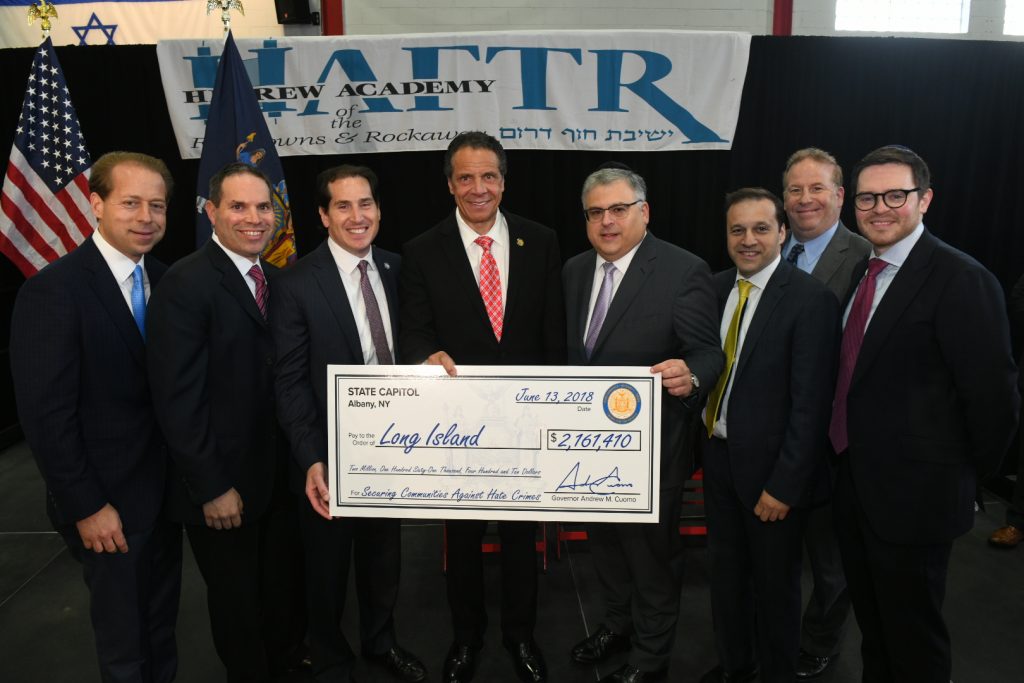 Gov. Andrew Cuomo announced to wild applause Wednesday that the first checks had gone out for his security grant program for yeshivos and Jewish sites, marking the occasion by presenting two giant checks at twin visits to yeshivos.
A total of 121 grants were distributed over the past week, the majority of recipients getting the maximum of $50,000 per campus. The $25 million program was established by the legislature after a rash of anti-Semitic vandalism and hoax calls last year.
Wearing a yarmulke, Gov. Cuomo first visited the Hebrew Academy of the Five Towns and Far Rockaway, followed by the Magen David Yeshivah in Brooklyn.

He recalled his Italian immigrant grandfather, Andrea, who would cry when saying “G-d bless America.”
“Now ‘G-d bless America’ has faced challenging times,” the Democrat said at HAFTR. “We’re seeing a rash of actions that are contrary to the fundamental concept of this country. We’re seeing more racial tension than ever before. … We’re seeing more acts of anti-Semitism than we have seen in years. … In New York state, we’ve seen a 90 percent increase in anti-Semitic activity. It is frightening.”
“We want every one of you, we want every student, every teacher, to know that when they come to school, they are safe,” he said, “that a school is a sanctuary, that they are protected, and that New York is going to make sure that you are safe and you are protected.”
Using vintage Cuomo humor, the governor joked that Allen Fagin of the Orthodox Union was what “in Italian we would call … a mensch. Yes, it was Italian first, mensch. And it was appropriated along the way.”
The governor credited the OU’s Teach NYS with helping to lobby for the grant program as part of the 2017 budget.
“We are beyond thrilled that this grants program is being released to the institutions that need it most,” said executive director Maury Litwack of the Teach Advocacy Network. “All New Yorkers can appreciate the intention behind this bill: the safety and well-being of students in all schools.”
Rabbi Chaim Dovid Zwiebel, executive vice president of Agudath Israel of America, said that the governor’s “unwavering stance on anti-Semitism has distinguished him as a friend of our community.”
“He has put his office and prestige behind a tangible proposal to protect religious institutions,” Rabbi Zwiebel said in a statement. “Those institutions will now be able to reap the fruits of this initiative in the form of more secure facilities and greater protection for yeshivah and other nonpublic students throughout the state. We are truly grateful for his leadership.”