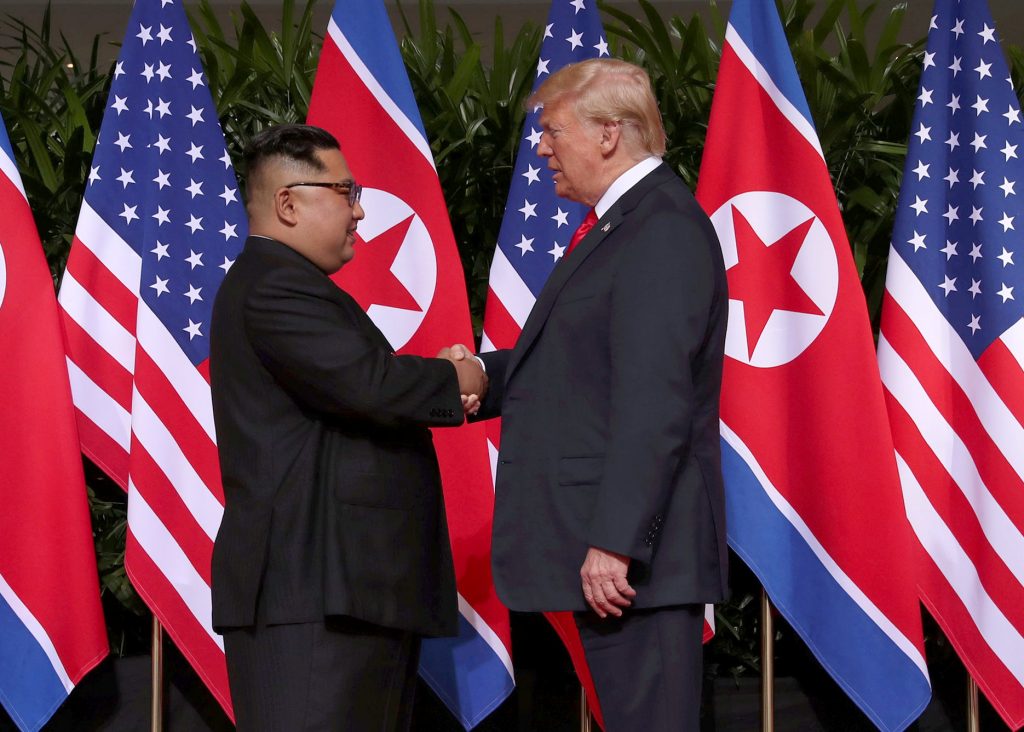 President Donald Trump and North Korea’s Kim Jong Un kicked off a momentous summit Tuesday, with Trump declaring the two would have a “great discussion” and Kim saying they had overcome “obstacles” to get to this point.

Before a row of alternating U.S. and North Korean flags, the leaders shook hands warmly at a Singapore island resort, creating an indelible image of two unorthodox leaders as they opened a conversation that could determine historic peace or raise the specter of a growing nuclear threat.

In the first meeting of a sitting U.S. president and a North Korean leader, Trump and Kim converged at a luxury resort on Singapore’s Sentosa Island, clasping hands as they stood on a red carpet in front of a backdrop of alternating U.S. and North Korean flags. Trump was first to arrive at the summit site, followed by Kim, both readying for the 9 a.m. meeting that culminated dizzying weeks of negotiations over logistics and policy.

Trump and Kim planned to meet one on one for most of an hour— joined only by translators. Then aides to each were to join for more discussions and a working lunch. But even before they met, Trump announced plans to leave early, raising questions about whether his aspirations for an ambitious outcome had been scaled back.

Up early in Singapore, Trump tweeted with cautious optimism: “Meetings between staffs and representatives are going well and quickly … but in the end, that doesn’t matter. We will all know soon whether or not a real deal, unlike those of the past, can happen!”

In the run-up to the talks, Trump had hopefully predicted the two men might strike a nuclear deal or forge a formal end to the Korean War in the course of a single meeting or over several days. But on the eve of the summit, the White House unexpectedly announced Trump would depart Singapore by Tuesday evening, meaning his time with Kim would be fairly brief. And Secretary of State Mike Pompeo sought to keep expectations for the summit in check.

“We are hopeful this summit will have set the conditions for future successful talks,” Pompeo said, describing a far more modest goal than Trump had outlined days earlier.

The White House said Trump was leaving early because negotiations had moved “more quickly than expected,” but gave no details about any possible progress in preliminary talks. On the day before the meeting, weeks of preparation appeared to pick up in pace, with U.S. and North Korean officials meeting throughout Monday at a Singapore hotel.

The president planned to stop in Guam and Hawaii on his way back to Washington.

Trump spoke only briefly in public on Monday, forecasting a “nice” outcome. Kim spent the day mostly out of view — until he left his hotel for a late-night tour of Singapore sights, including the Flower Dome at Gardens by the Bay, billed as the world’s biggest glass greenhouse.

As Trump and Singapore’s Prime Minister Lee Hsien Loong sat down for a working lunch at the Istana house, the president sounded optimistic, telling Lee, “We’ve got a very interesting meeting in particular tomorrow, and I think things can work out very nicely.” Trump had earlier tweeted about “excitement in the air!”

It was a striking about-face from less than a year ago, when Trump was threatening “fire and fury” against Kim, who in turn scorned the American president as a “mentally deranged U.S. dotard.” As it happens, the North Korean and the American share a tendency to act unpredictably on the world stage.

Beyond the impact on both leaders’ political fortunes, the summit could shape the fate of countless people — the citizens of impoverished North Korea, the tens of millions living in the shadow of the North’s nuclear threat, and millions more worldwide. Or, it could amount to little more than a much-photographed handshake.

Still, the sense of anticipation was great in Singapore, with people lining spotless streets holding cellphones high as Trump headed to meet Lee.

U.S. and North Korean officials huddled throughout Monday at the Ritz-Carlton hotel ahead of the sit-down aimed at resolving a standoff over Pyongyang’s nuclear arsenal. Delegates were outlining specific goals for what the leaders should try to accomplish and multiple scenarios for resolving key issues, a senior U.S official said, adding that the meetings were also an ice breaker of sorts, allowing the teams to get better acquainted after decades of minimal contact between their nations.

Trump’s early exit will be his second from a summit in just a few days.

Alluding to the North’s concerns that giving up its nuclear weapons could surrender its primary deterrent to forced regime change, Pompeo told reporters that the U.S. was prepared to take action to provide North Korea with “sufficient certainty” that denuclearization “is not something that ends badly for them.”

He would not say whether that included the possibility of withdrawing U.S. troops from the Korean Peninsula, but said the context of the discussions was “radically different than ever before.”

“I can only say this,” Pompeo said. “We are prepared to take what will be security assurances that are different, unique, than America’s been willing to provide previously.”

The North has faced crippling diplomatic and economic sanctions as it has advanced development of its nuclear and ballistic missile programs. Pompeo held firm to Trump’s position that sanctions will remain in place until North Korea denuclearizes — and said they would even increase if diplomatic discussions did not progress positively.

Experts believe the North is close to being able to target the entire U.S. mainland with its nuclear-armed missiles, and while there’s deep skepticism that Kim will quickly give up those hard-won nukes, there’s also some hope that diplomacy can replace the animosity between the U.S. and the North.

While advisers say Trump has been reviewing briefing materials, the president insists his gut instincts will matter most when he gets in the room with Kim. He told reporters he thinks he will know almost immediately whether a deal can be made, saying: “I will know, just my touch, my feel. That’s what I do.”