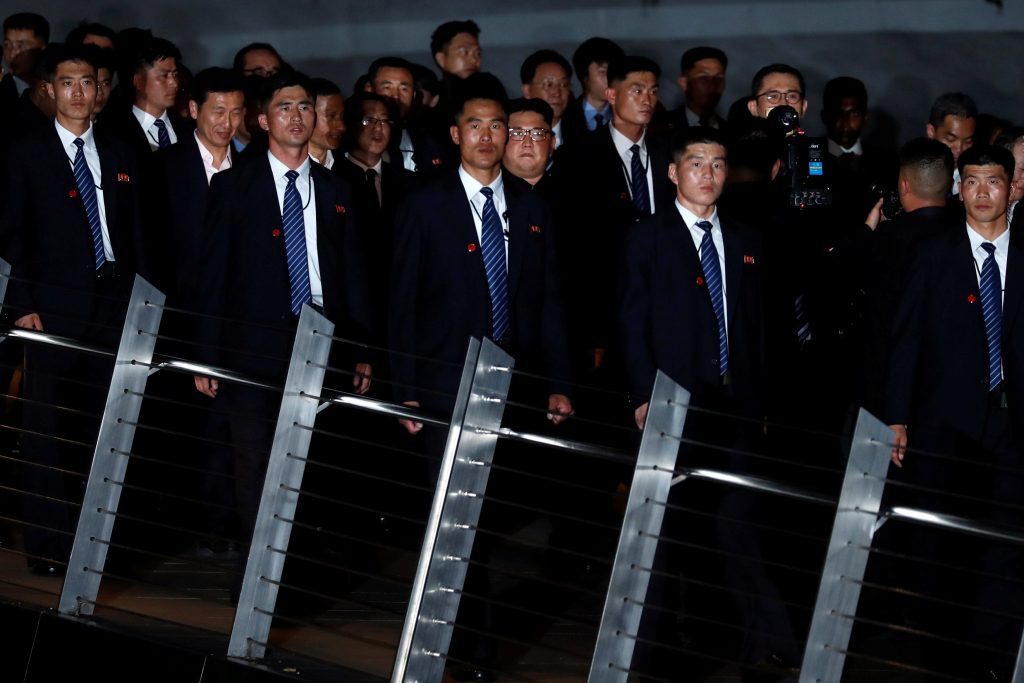 U.S. President Donald Trump said on Monday his historic summit with North Korean leader Kim Jong Un in Singapore could “work out very nicely” as officials from both countries sought to narrow differences on how to end a nuclear stand-off on the Korean peninsula.

Kim, one of the world’s most reclusive leaders, made an evening tour of sites on Singapore’s waterfront, on the eve of the summit that is due to get underway on Tuesday morning at a nearby resort island.

While Trump was optimistic about prospects for the summit between the old foes, U.S. Secretary of State Mike Pompeo injected a note of caution ahead of the first-ever meeting of sitting U.S. and North Korean leaders, saying it remained to be seen whether Kim was sincere about his willingness to denuclearize.

Officials from the two sides held last-minute talks aimed at laying the groundwork for a meeting that was almost unthinkable just months ago when the two leaders were exchanging insults and threats that raised fears of war.

But after a flurry of diplomatic overtures eased tension in recent months, the two leaders are now headed for a history-making handshake that U.S. officials hope could eventually lead to the dismantling of a North Korean nuclear program that threatens the United States.

Offering a preview to reporters, Pompeo said it could provide “an unprecedented opportunity to change the trajectory of our relationship and bring peace and prosperity” to North Korea.

However, he played down the possibility of a quick breakthrough and said the summit should set the framework for “the hard work that will follow,” insisting that North Korea had to move toward complete, verifiable and irreversible denuclearization.

North Korea, though, has shown little appetite for surrendering nuclear weapons it considers vital to the survival of Kim’s dynastic rule.

Sanctions on North Korea would remain in place until that happens, Pompeo said. “If diplomacy does not move in the right direction … those measures will increase.”

“North Korea has previously confirmed to us its willingness to denuclearize and we are eager to see if those words prove sincere,” he said.

The White House later said discussions with North Korea had moved “more quickly than expected” and Trump would leave Singapore on Tuesday night, after the summit. He had earlier been scheduled to leave on Wednesday.

Kim is due to leave on Tuesday afternoon, a source involved in the planning of his visit said on Sunday.

Kim was not believed to have left his hotel since a meeting with Singapore Prime Minister Lee Hsien Loong soon after his arrival in the city on Sunday, but he ventured out on Monday evening.

The Swiss-educated leader, who is believed to be 34, has not left his isolated country since taking office in 2011 other than to visit China and the South Korean side of the border Demilitarized Zone, which separates the two Koreas.

His first stop was a waterfront park with futuristic installations, Gardens by the Bay, which boasts the largest glass greenhouse and tallest indoor waterfall in the world.

He joined Singapore’s foreign minister, Vivian Balakrishnan, who took a selfie, before stopping at the Marina Bay Sands hotel, which resembles a giant surfboard perched on three tall columns, for a look out over the bright lights of the city from its rooftop garden and swimming pool.

The rare public appearance of Kim, waving and smiling to onlookers, adds to the more affable image of the young leader that has emerged since his summit in April with South Korean leader Moon Jae-in.

Just a few months ago, Kim was an international pariah accused of ordering the killing of his uncle, a half-brother and scores of officials suspected of disloyalty.

President Trump arrived in Singapore on Sunday after a blow-up over trade with other members of the Group of Seven major industrialized nations that cast a cloud over his efforts to score a major foreign policy win in the nuclear talks.

Although gaps remain over what denuclearization would entail, Trump sounded a positive note in a lunch meeting with Singapore’s Prime Minister Lee.

It was a far cry from last year when Trump threatened North Korea with “fire and fury” and mocked Kim as “little rocket man,” and Kim denounced the U.S. president as the “mentally deranged U.S. dotard.”

Trump and Kim are staying in separate hotels less than a kilometer apart in the famous Orchard Road area of Singapore, dotted with high-rise luxury apartment blocks, offices and glittering shopping malls.

Commenting for the first time on the summit, North Korea’s state-run KCNA news agency said the two sides would exchange “wide-ranging and profound views” to re-set relations. It heralded the summit as part of a “changed era.”

In the lead up to the summit, North Korea rejected any unilateral nuclear disarmament, and KCNA’s reference to denuclearization of the peninsula has historically meant it wants the United States to remove its “nuclear umbrella” protecting South Korea and Japan.

The White House said President Trump would hold a one-on-one meeting with Kim on Tuesday on the small island of Sentosa. The two will later be joined by officials and have lunch together.

Many experts on North Korea, one of the most insular and unpredictable countries in the world, remain skeptical Kim will ever completely abandon nuclear weapons. They believe Kim’s engagement is aimed at getting the United States to ease the crippling sanctions that have squeezed the impoverished country.

Kelsey Davenport, director for Nonproliferation Policy at the Arms Control Association, said there were signs that the gaps between the two sides were narrowing but there was also risk.

“Trump is likely to declare the summit a victory irrespective of the outcome, but if the two sides fail to reach a common understanding of denuclearization it will put at risk any process that the summit kicks off,” he said.

“The process could be doomed before it begins.”

President Trump initially touted the potential for a grand bargain with North Korea to rid itself of a nuclear missile program that has advanced rapidly to threaten the United States.

But he has since lowered expectations, backing away from an original demand for North Korea’s swift denuclearization.

He has said the talks would be more about starting a relationship with Kim for a negotiating process that would take more than one summit.