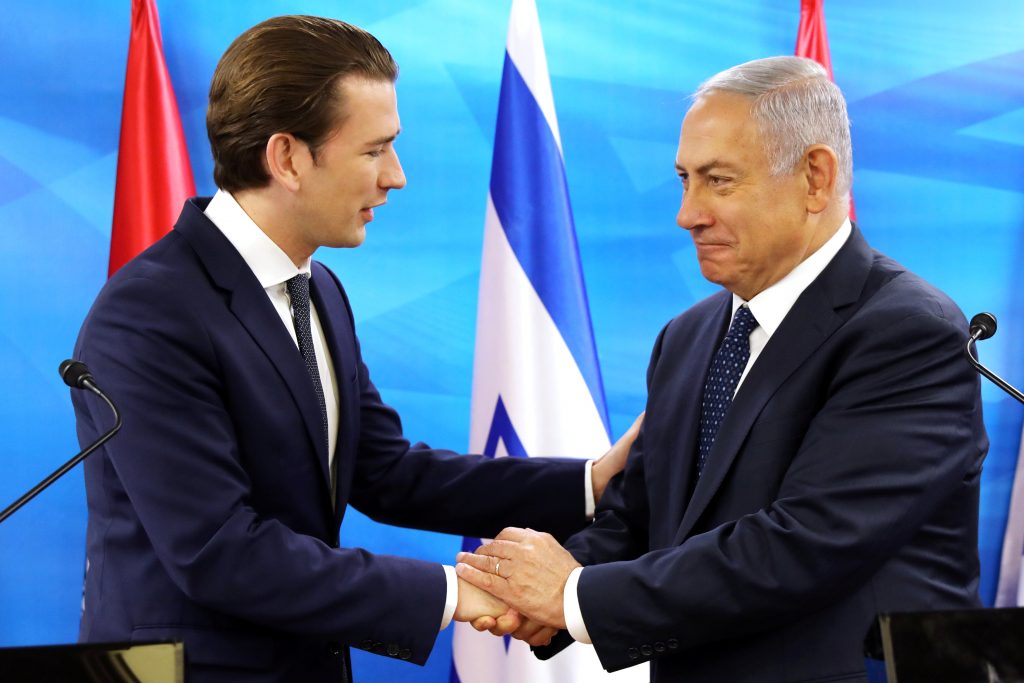 Israeli Prime Minister Binyamin Netanyahu lavishly praised Austrian Chancellor Sebastian Kurz for the stance he has taken against anti-Semitism, in a joint press conference in Yerushalayim on Monday.

“You are a true friend of Israel and the Jewish people. I think you demonstrated that when you went to the Kotel, to the Western Wall, and I hope that other European leaders will follow your important example,” said PM Netanyahu, referring to the fact that EU leaders do not normally visit the Kosel because they consider it “occupied territory.”

PM Netanyahu went on to laud Kurz for both words and deeds for the Jewish people:

“We deeply appreciate the steps taken by the Austrian government and the Austrian parliament in recent months, most notably among them your speech, a wonderful speech of the 80th anniversary of the Anschluss. You addressed historical responsibility. You clearly opposed anti-Semitism and you spoke about Jewish life in Austria.

“You said, and I want to quote this, ‘Austria was not only a victim but also a perpetrator.’ These are courageous and bold words and I think they chart the course that you’re leading in Austria and our relationship, one that I support very, very much.

“You have backed up your words with actions. You’ve shown zero tolerance towards anti-Semitism; you established a place of remembrance in Vienna listing the names of all 60,000 Austrian Jews who perished in the Holocaust; you’re funding youth visits to Mauthausen and education and memorial projects. Yesterday you announced in Yad Vashem a four million euro fund for a heritage center in Yad Vashem. We are deeply grateful for these and other important steps and for your leadership.”

At the press conference, there was no mention of Israel’s boycott of officials in the Austrian government who belong to the anti-Semitic Freedom Party.

However, later on Monday, the Austrian Chancellor told Israel’s Channel 10: “I don’t see this as a boycott, but rather that there are reservations about the Freedom Party.”

He said the Freedom Party, which has Nazi roots, is working to deal with its past. “It renounces every type of anti-Semitism and together we’re leading in the government a very pro-Israel line,” he says.

In response to comments by Chancellor Kurz that he intends to bring Israel’s security concerns and the issue of anti-Semitism more to the attention of the EU, the PM said:

For his part, Mr. Kurz said: “I can assure you that Austria will fight all forms of anti-Semitism in Europe with determination. Be it the still existing one or also new imported anti-Semitism.”

“We also know that our responsibility does not end at our borders. We want to support the State of Israel and also your security needs; you mentioned that. You live in a dangerous neighborhood and your neighbors are not like ours – Liechtenstein or Switzerland. And so we understand the difference. But we understand that your situation is a different one and therefore we will try to raise awareness in Europe for the special situation and the special security needs of Israel.”