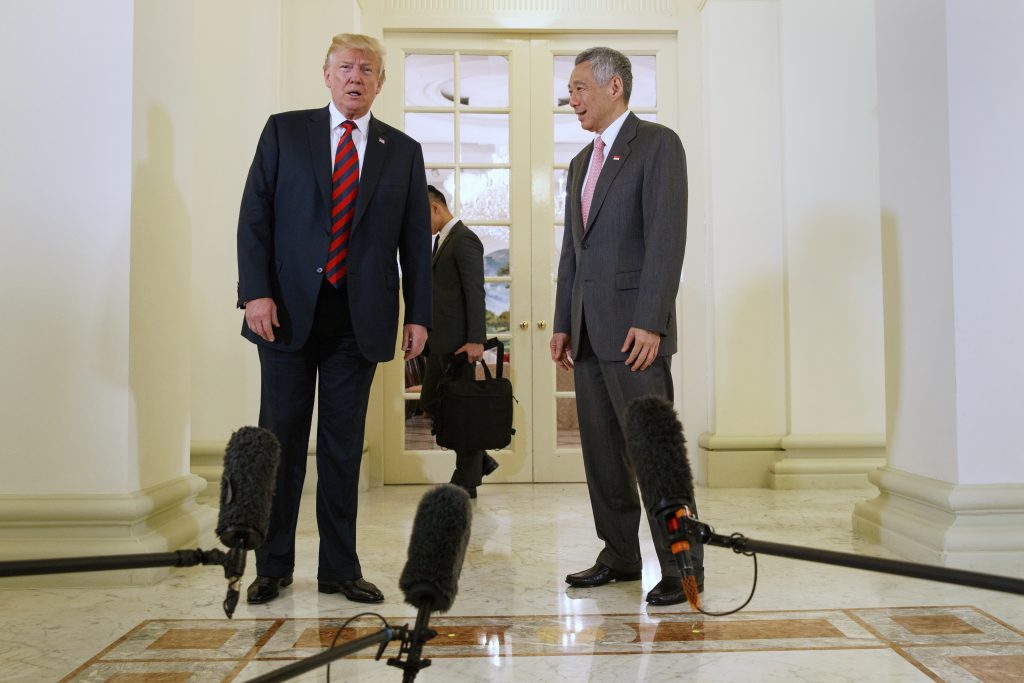 President Donald Trump said on Monday his historic summit with North Korean leader Kim Jong Un in Singapore could “work out very nicely” as officials from both countries met to narrow differences on how to end a nuclear stand-off on the Korean Peninsula.

Kim and Trump arrived in the tropical city-state on Sunday for the first ever face-to-face meeting by leaders of two countries that have been enemies since the 1950-1953 Korean War.

With gaps remaining over what denuclearization would entail, officials from both sides held two hours of talks to push the agenda forward ahead of Tuesday’s summit.

U.S. Secretary of State Mike Pompeo said in a statement that the meetings were “substantive and detailed” but there was no immediate word on what the outcome was.

“We’ve got a very interesting meeting in particular tomorrow, and I just think it’s going to work out very nicely,” Trump said.

He also told Lee: “We appreciate your hospitality and professionalism and friendship … You’re my friend.”

Kim remained ensconced in the heavily guarded St. Regis Hotel where he is staying. There was also no sign of his sister, Kim Yo Jong, who has accompanied him to Singapore.

Some people were grumbling in the wealthy city-state because of the traffic jams caused by the summit and the cost of hosting two leaders with massive security needs. Lee has said the summit would cost Singapore about 20 million Singapore dollars ($15 million), more than half of which would go on security.

“Thanks [to] PM Lee for spending $20 million of taxpayers money, which can … help a lot of needy families in Singapore to survive,” posted one social media user. Others complained about the jams in downtown Singapore.

Lee said the cost was worthwhile.

“It is our contribution to an international endeavor which is in our profound interest,” he told reporters on Sunday.

Leaders Trump and Kim are staying in separate hotels in the famous Orchard Road area of Singapore, dotted with high-rise luxury apartment blocks, offices and glittering shopping malls. Traffic was held up in the steamy midday sun and scores of bystanders were penned in by police when President Trump went to meet President Lee.

Similar scenes were seen on Sunday when Kim and Trump arrived in the city, and when Kim went to meet Lee. Entry to their hotels is extremely restricted.

Commenting for the first time on the summit, North Korea’s state-run KCNA news agency earlier said the two sides would exchange “wide-ranging and profound views” to reset relations. It heralded the summit as part of a “changed era.”

Discussions would focus on “the issue of building a permanent and durable peace-keeping mechanism on the Korean Peninsula, the issue of realizing the denuclearization of the Korean peninsula and other issues of mutual concern,” KCNA said.

In the lead-up to the summit, North Korea rejected any unilateral nuclear disarmament, and KCNA’s reference to denuclearization of the peninsula has historically meant that Pyongyang wants the United States to remove its “nuclear umbrella” protecting South Korea and Japan.

Pompeo said in an earlier tweet that Washington was “committed to the complete, verifiable, irreversible denuclearization of the Korean Peninsula.”

Many experts on North Korea, one of the most insular and unpredictable countries in the world, remain skeptical Kim will ever completely abandon nuclear weapons. They believe Kim’s latest engagement is aimed at getting the United States to ease the crippling sanctions that have squeezed the impoverished country.

A Trump administration official, speaking on condition of anonymity, said the U.S. side was entering the talks with a sense of optimism and an equal dose of skepticism given North Korea’s long history of developing nuclear weapons.

“We will not be surprised by any scenario,” said the official.

The official said Trump and Kim would hold a one-on-one meeting on Tuesday that could last up to two hours. He described it as a “get to know you plus” meeting.

Later, a meeting including officials could last another hour.

The summit’s venue is the Capella Hotel on Sentosa, a resort island off Singapore’s port with luxury hotels, a theme park and man-made beaches.

President Trump, speaking in Canada on Saturday, said any agreement at the summit would be “spur of the moment,” underscoring the uncertain outcome of what he called a “mission of peace.”

He initially touted the potential for a grand bargain with North Korea to rid itself of a nuclear missile program that has advanced rapidly to threaten the United States.

But he has since lowered expectations, backing away from an original demand for North Korea’s swift denuclearization.

He has said the talks would be more about starting a relationship with Kim for a negotiating process that would take more than one summit.