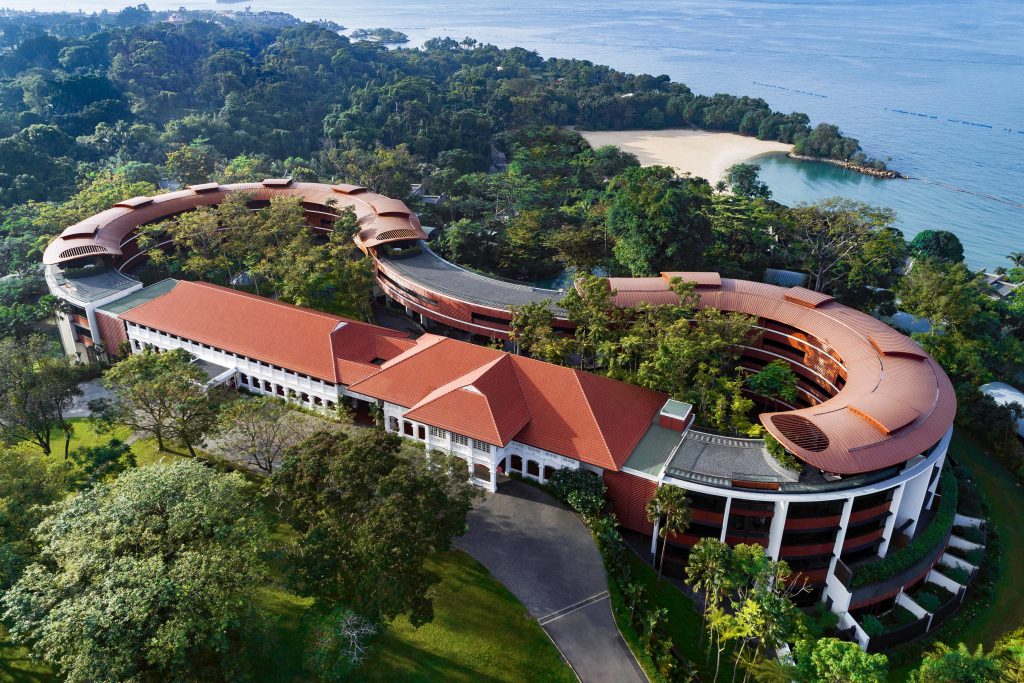 A new surveillance camera was installed and restaurants closed on Singapore’s Sentosa Island, a popular tropical getaway thrust into the spotlight ahead of a summit between President Donald Trump and North Korean leader Kim Jong Un.

Located a quarter mile (400 meters) off the coast of the city-state, Sentosa is no stranger to celebrities and VIPs. It is linked to the city by a bridge and home to high-end resorts, golf courses and a large amusement park.

The macabre history of the island, which will become the venue of the historic summit on Tuesday, is less known.

In the 18th century, when Singapore was a British colony, an unknown epidemic killed off most of its population of 60. Only two households survived.

During World War II, the British used artillery forts and a battery on the island to unsuccessfully fend off a Japanese invasion, which transformed it into a prisoner-of-war camp.

It’s no wonder the island was known as Pulau Blakang Mati, which roughly translates as “island of death from behind.”

In 1970, the island was renamed after a nationwide contest. Sentosa was subsequently developed as a resort and expanded on reclaimed land.

Nevertheless, Lee Kuan Yew, Singapore’s prime minister from 1959 to 1990, used the island to hold long-term political prisoners who were often detained without trial. Chia Thye Poh, a former member of parliament, spent 23 years in jail and under loose house arrest there.

He worked as a freelance translator for the island’s management, before he was allowed to visit the mainland for a short time every day and set free.

These days, the island attracts around 19 million visitors every year.

“I think it’s very good. Once they come, a lot of people will come here. All the Singaporeans want to see them,” he said.

The resort island plans to keep welcoming tourists this week despite boosted security for the summit at the 112-room Capella Singapore hotel.

A group of journalists gathered outside the hotel and across the road, waiting for signs that officials had arrived. Only authorized vehicles were allowed to enter, and hotel restaurants were not taking reservations until after the summit.

Police have marked the island and some of its surrounding waters as a “special event area,” where loud-hailers, flags or banners over a meter (yard) long or wide are banned.

At a preserved fort, World War II cannons were decorated with flowers to honor the historic meeting. Lilies, eustomas, gerberas and olives were “chosen specifically for their representation as symbols of peace.”

Adam Chen, a visitor from Hong Kong, thought that it was a nice gesture. “I hope the talks are a success,” he said.

“Ever since I’ve been working here, the government’s doing a great job in keeping Singapore as peaceful as possible. The Singapore government is really capable of doing it,” Belver said.

Businesses like the Singapore Mint are optimistic that the summit would go well. It is selling medallions showing a handshake between Mr. Trump and Kim.

Roses and magnolias, the national flowers of the U.S. and North Korea, are intertwined under a carving of a dove.

“We hope there is some kind of bonding. Hopefully, the friendship improves from this summit onwards,” said its director David Yip.