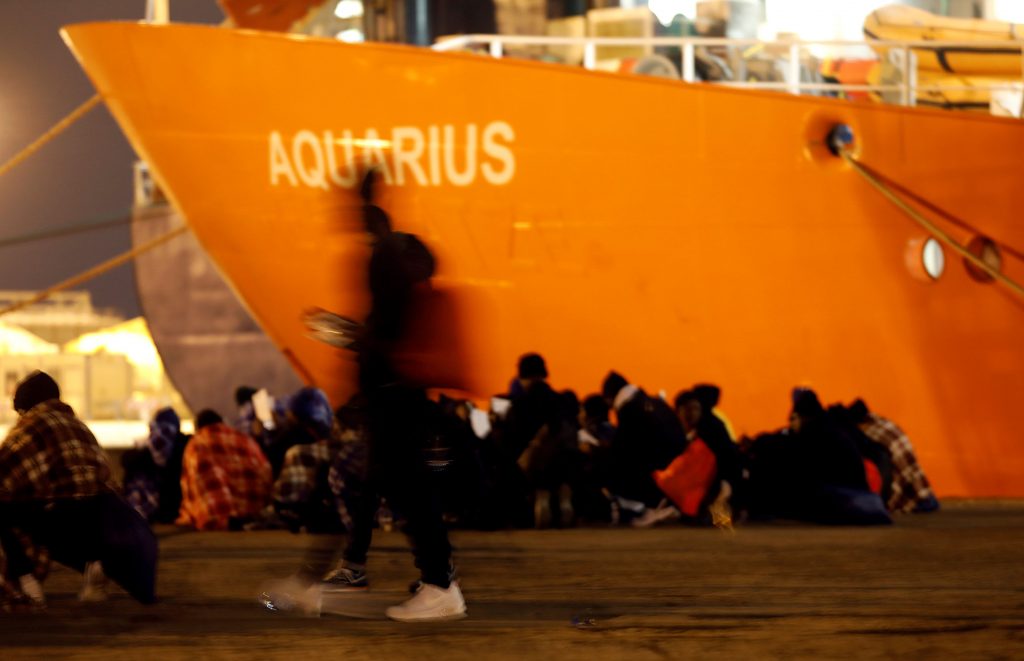 A private rescue ship carrying 629 migrants remained Sunday evening on a northward course in the Mediterranean Sea after more than a day of not receiving permission to dock in either Italy or the small island nation of Malta.

Aid group SOS Mediterranee said the passengers on its ship, the Aquarius, included 400 people who were picked up by the Italian navy, the country’s coast guard and private cargo ships and transferred. The rescue ship’s crew itself pulled 229 migrants from the water or from traffickers’ unseaworthy boats Saturday night, including 123 unaccompanied minors and seven expecting women.

The Aquarius and its passengers were caught up in a crackdown swiftly implemented by the right-wing partner in Italy’s new populist government, which has vowed to stop the country from becoming the “refugee camp of Europe.”

“Starting today, Italy, too, begins to say NO to the trafficking of human beings, NO to the business of clandestine immigration,” Interior Minister Matteo Salvini, leader of the anti-migrant League party, tweeted Sunday.

Salvini and Italian Transportation Minister Danilo Toninelli, who is part of the 5-Star Movement faction in the new government, said in a joint statement Sunday that it was Malta’s responsibility to “open its ports for the hundreds of the rescued on the NGO ship Aquarius.”

“The island can’t continue to turn the other way,” the ministers said. “The Mediterranean is the sea of all the countries that face it, and it (Malta) can’t imagine that Italy will continue to face this giant phenomenon in solitude.”

The Maltese government, however, was not moved. It said in a statement that the Aquarius took on the passengers in waters controlled by Libya and where Italian authorities in Rome coordinate search-and-rescue operations.

The Maltese Rescue Coordination Center “is neither the competent nor the coordinating authority,” the statement said.

The aid group said in a statement it had taken “good note” of Salvini’s stance, as reported earlier by Italian media. It added that the Aquarius “is still waiting for definitive instructions regarding the port of safety.”

SOS Mediterranee said Maltese search-and-rescue authorities were contacted by their Italian counterparts “to find the best solution for the well-being and safety” of the people on the ship.

Farther west in the Mediterranean, Spain’s maritime rescue service saved 334 migrants and recovered four bodies from boats it intercepted trying to reach Europe over the weekend. The rescue service said its patrol craft reached nine different boats carrying migrants that had left from Africa on Saturday and early Sunday.

One boat found Sunday was carrying four bodies along with 49 migrants. The cause of death was yet to be determined.

To the east, Libya’s coast guard intercepted 152 migrants, including women and children, from two boats stopped in the Mediterranean off the coast of the western Zuwara district Saturday. The migrants were taken to a naval base in Tripoli.

Human rights groups oppose returning rescued migrants to Libya, where many are held in inhumane conditions, poorly fed and often forced to do slave labor.

Libya was plunged into chaos following a 2011 uprising. The lawlessness in Libya has made it a popular place for migrants to try to depart for Europe.

Driven by violent conflicts and extreme poverty, hundreds of thousands of migrants have reached southern Europe in recent years by crossing the Mediterranean in smugglers’ boats that often are unseaworthy.

The United Nations says at least 785 migrants have died crossing the sea so far, this year.