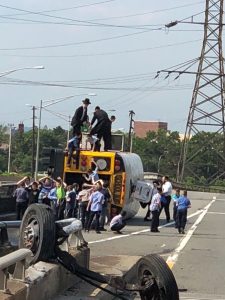 A school bus carrying yeshivah students home from a trip to a New Jersey amusement park on Thursday overturned but, baruch Hashem, there were no serious injuries.

A Talmud Torah Mevakshei Hashem bus returning home from Diggerland USA was tilted on its side about 4:00 in the afternoon on the ramp leading to the Goethals Bridge. All 30 boys on board were safely evacuated and sent home on other buses. Three of the boys had minor injuries and were treated on the scene before being sent home.

Sixth-grader Yitzchok Levanoni said he was on the right side of the bus that ended up on top after it overturned.

“One of the children tried prying open the window until a rebbi was able to open the emergency door on the bus’s roof,” Levanoni said.

He said that a passing food truck stopped and distributed Gatorade to all children.

The bus’s axle lay several feet away, suggesting that the axle came off, leading to the overturn on the bridge connects the New Jersey Turnpike and Staten Island.

The bus was one of several from the yeshivah, located at Ocean Parkway in Kensington, returning from a trip to the theme park in West Berlin, N.J.

Yosef Kaplan, who owns Bertram Foods in Flatbush, told Hamodia that one of his truck drivers had witnessed the accident. The driver, who was not able to speak directly to Hamodia since he does not speak English, called Kaplan right away.

“He watched the bus hit the barrier and flip over,” Kaplan said. “It’s a real miracle — if he would have hit the second guardrail he would have flipped onto the lower level of the Turnpike.

Rabbi Yitzchok Gluck, the yeshivah’s menahel, said that a robocall was immediately sent to all parents.

Chai Lifeline was scheduled to hold a phone conference with all parents at 10:30 Thursday night and will speak to all children in the yeshivah on Friday.

“But they had a great trip,” said Mrs. Pessie Levanoni, Yitzchok’s mother. “This only happened at the end.” 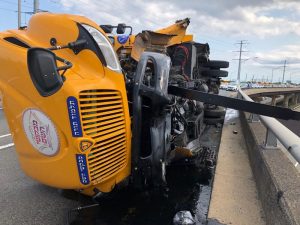 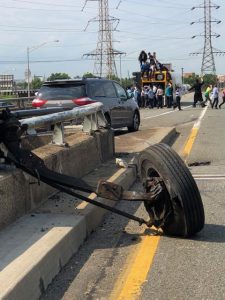 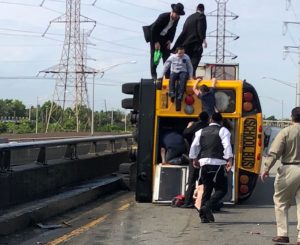