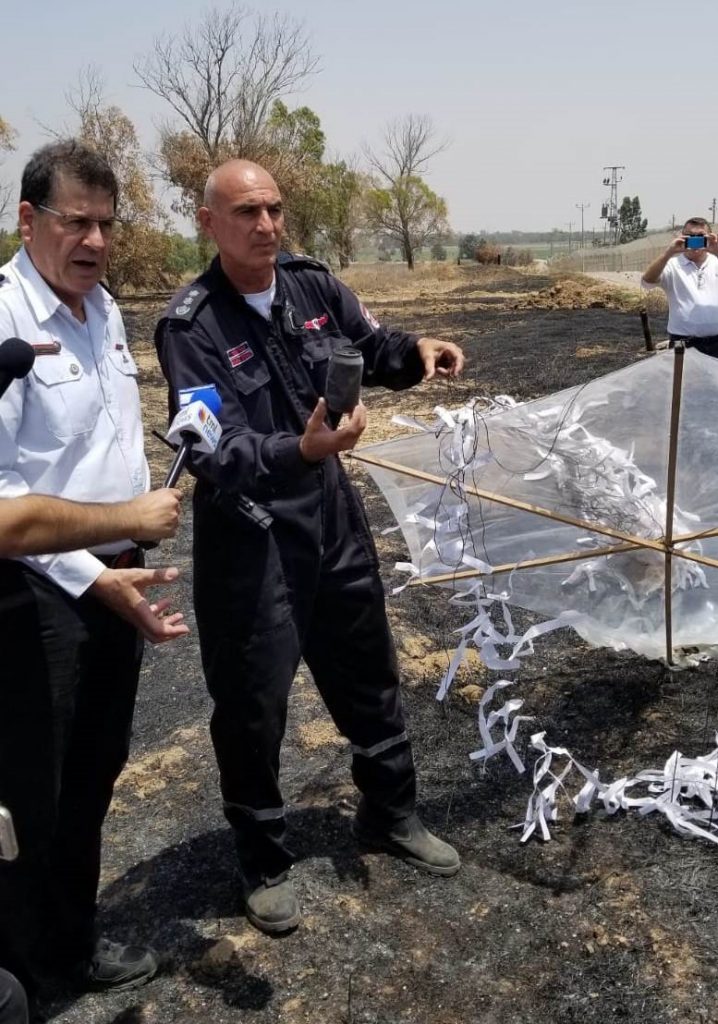 Israel’s Government Press Office (GPO) held a tour for foreign journalists on Thursday in the Gaza periphery where terrorist fire kites and balloons have ravaged large swaths of farmland and nature reserves.

The tour was aimed at “balancing the picture and increasing global awareness of the phenomenon, which is aimed entirely at civilians,” which has received “very little” coverage in the media, the GPO said in a statement.

The tour began in the burnt, still-smoking fields several hundred yards from Kibbutz Or Haner where Fire and Rescue Service Spokesperson Yoram Levy briefed the journalists on the Fire and Rescue Service’s deployment to meet the threat posed by the new reality. At the service’s regional command center in Sderot, tour participants were briefed on the scope of the challenge in real time.&

The tour continued to Kibbutz Nahal Oz, to a blackened, ash-covered hill overlooking the Shuja’iyya neighborhood about a mile and a half away. Kibbutz spokesperson Danny Rahamim briefed the visitors on how farmers and residents are dealing with the phenomenon which threatens their livelihoods.

“We will not budge from here. We will continue to work the land down to the last meter and we are also optimistic that it will be possible to achieve peace and stability,” he said.

As he finished his remarks, two firefighters brought a Palestinian kite that had been captured nearby and showed how such a primitive, simple and inexpensive device could cause so much damage.

The commander of the IDF kite unit, Col. Nadav Livne discussed the success of the IDF’s kite-hunting drones. Between 450-500 kites have been intercepted by the high-durability UAVs, which can attain speeds of over 100 miles per hour. A demonstration was held in which a UAV took off, accelerated and maneuvered. According to Col. Livne, reservists who specialize in flying UAVs have been mobilized and have succeeded in reducing the number of fires over the past week. &

GPO Director Nitzan Chen said that in the framework of the struggle over content and headlines, the GPO would expand its public diplomacy efforts vis-à-vis the foreign press in Israel, part of which is trying to downplay the significance of the firing and the attacks on communities in the area adjacent to the Gaza Strip.