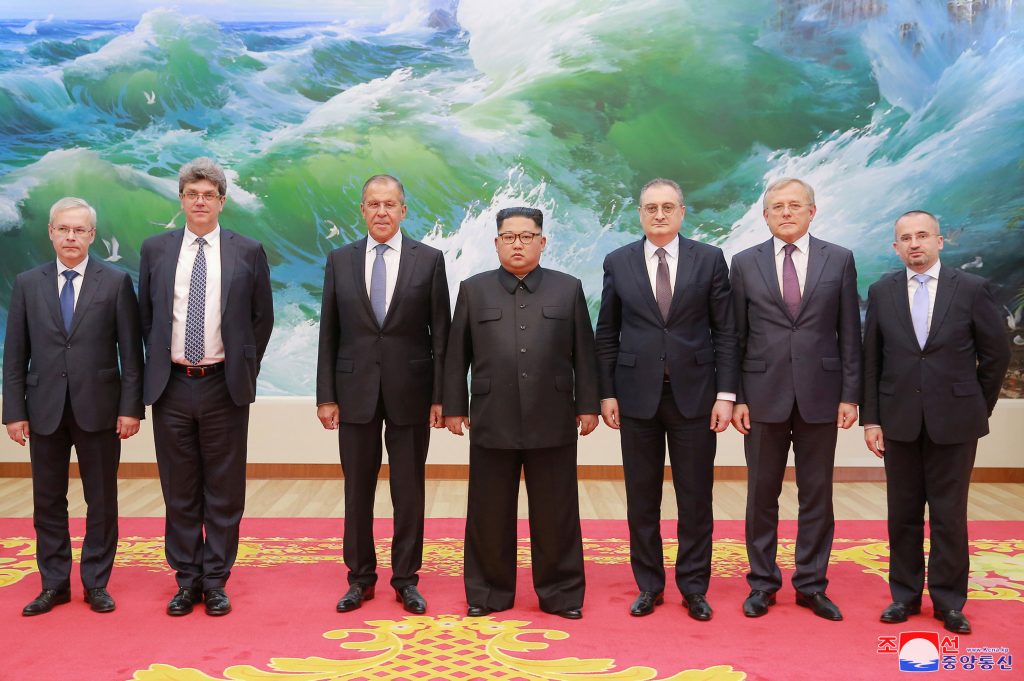 Fifteen years ago, five world powers banded together in an audacious but ultimately doomed bid to reach a nuclear grand bargain with North Korea.

Now, as President Donald Trump prepares for a one-on-one summit next week with dictator Kim Jong Un, the others are scrambling for influence – and alarmed at the prospect of sweeping changes across East Asia.

The leaders of China, South Korea, Japan and Russia are determined to make their presence felt at the Singapore summit on June 12, lining up their own meetings with Trump and Kim and pushing agendas that are, in many cases, at odds with one another.

Last week, Russian Foreign Minister Sergey Lavrov met with Kim in Pyongyang, while Japanese Prime Minister Shinzo Abe will visit Trump at the White House on Thursday. South Korean President Moon Jae-in is lobbying to meet Trump and Kim a day after their summit for a trilateral meeting. And Chinese President Xi Jinping has played host to Kim twice over the past three months, overseeing a rapid warming of relations.

The flurry of diplomacy has raised hopes that the major powers can navigate a treacherous set of technical, political and emotional issues and ease tensions on the Korean Peninsula, after rising fears last year that the North’s rapid nuclear advancements would lead to a military confrontation with the United States.

But amid deep uncertainties – including doubts about Kim’s intentions and Trump’s preparedness – analysts have warned that the process could lead to a fundamental reordering of security alliances in one of the world’s most populous and economically proficient regions.

“This is about the future of northeast Asia, not just about North Korea – and Kim Jong Un is driving the bus,” said Sheila Smith, a Japan expert at the Council on Foreign Relations. “The interesting question is whether the other players will wake up to the fact that they need to get a better handle on the kind of northeast Asia they want as they go into the conversation. We certainly don’t.”

Over the past three decades, North Korea’s steady march toward nuclear and ballistic missile proficiency has increasingly shaped the security dynamics in the region after the end of the Cold War.

As the United States cemented its long-standing alliances with Tokyo and Seoul, a rising China has remained intent on maintaining its dominant political influence and trade relationship with its fellow Communist neighbor.

But Trump’s eagerness to toss out convention and rethink the United States’s global partnerships and leadership role has scrambled the playing field.

Ahead of the summit, Trump has reiterated his interest in potentially reducing the number of U.S. troops based in South Korea, pledged to guarantee the Kim regime’s survival under a nuclear deal, and appeared intrigued with the idea of a peace treaty to formally end the Korean War.

Such moves have alarmed the conservative Abe, who fears Washington is moving to normalize relations with a hostile state that would remain a major threat to Japan, whose constitution forbids nuclear weapons and limits its military. Japanese officials said Abe will again press Trump on Thursday to maintain a hard line with Pyongyang – not just over its nuclear program but also its short- and medium-range missiles.

“The big outlier in all of this is Japan,” said Evan Medeiros, an analyst with the Eurasia Group who served as senior Asia director for the National Security Council in the Obama administration. “I think that’s by design on the part of North Korea … and as a result, that’s forced Abe into a very unfortunate position, having to chase after everybody to have a role.”

Trump’s suggestion that a reduced threat from North Korea would lead, naturally, to a reduced U.S. security presence in East Asia could set up a potential clash between Tokyo and Seoul, whose own frosty bilateral relations with Japan have required Washington to play a mediating role at times.

Moon, a liberal, has led the outreach to Pyongyang. After Trump temporarily canceled the summit last week amid increasing hostilities, Moon held a second, emergency meeting with Kim to help put the talks back on track. Moon has pushed hard for a peace deal and minimized talk of human rights, even as Abe has pressed Trump to raise the cases of 12 Japanese nationals abducted by the North in the 1970s and 1980s.

During the George W. Bush administration, the United States took the lead in the Six-Party talks with the North, a multilateral effort that collapsed after Kim Jong Il, the current leader’s father, violated an agreement by conducting missile tests.

The flurry of smaller summits since Kim and Moon held an emotional meeting in the Korean demilitarized zone in April have fractured the traditional model for dealing with North Korea, said Michael Auslin, an Asia analyst at the Hoover Institution.

“What we’re seeing is a creeping normalization of North Korea,” Auslin said. “The business-as-usual model of big, set-piece summits or diplomatic initiatives like the Six-Party Talks is being replaced by much more regular interactions between all the players.”

The question, Auslin said, is whether “the nature of the North Korea regime has changed in any way to give us confidence that all these channels will be fruitful?”

In Trump’s view, the answer is not necessarily. Three weeks ago, he blamed Beijing for pushing Kim to a more belligerent stance and said he was displeased by Kim’s second meeting with Xi, which came as a surprise to the White House.

Analysts called Trump’s accusations exaggerated but acknowledged that the warming relations between Beijing and Pyongyang will play a factor in the Trump-Kim negotiations. While China has been angered by North Korea’s flaunting of its nuclear program, Xi is intent on ensuring that Kim does not strike a deal that draws his regime closer to Washington.

“China has had warming relations with North Korea over the last six months, after a long chill,” said Frank Jannuzi, president of the Mansfield Foundation, who previously served as a Democratic aide to the Senate Foreign Relations Committee. “And I think it’s quite possible that as Kim Jong Un secured his flanks and improved relations with China and Moon Jae-in, he became more confident and more willing to strike a harder bargain.”

Moscow has played a smaller role in the diplomatic maneuvering, but Lavrov’s visit was viewed as a sign that Russian leader Vladimir Putin is intent on maintaining leverage to play “spoiler,” as one analyst put it. News that Syrian strongman Bashar Assad is planning his own visit to Pyongyang raised additional worries that Russia and its allies could try to disrupt the process.

Of all the moves, some analysts said it is Kim who has played his hand the most skillfully, leveraging his nuclear program to maximum advantage as the others furiously court him.

“Kim is one of the most successful world leaders in power today,” Auslin said. “When I look at Kim, I don’t see a crazy, isolated figure, but a really wily and successful national leader.”